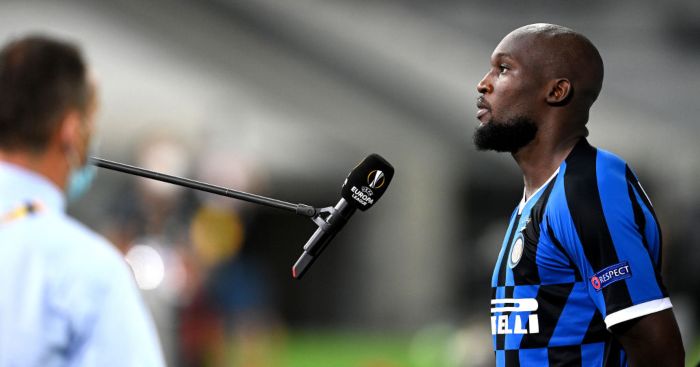 The Belgium striker was sold to Inter Milan last summer after falling down the pecking order under Ole Gunnar Solskjaer.

His move to the San Siro, however, has paid rich dividends. Lukaku scored his 32nd and 33rd goals of the season on Monday night as Inter trounced Shakhtar 5-0 to reach the Europa League final.

After the game, Lukaku was asked for his opinions on Manchester United’s progress since he left for Italy.

And despite leaving under something of a cloud, the Belgian clearly held no hard feelings. In fact, a trio of Man Utd stars came in for praise from the frontman.

“United tried their hardest,” Lukaku said after the game. “I think they had a really good season.

“I think Ole (Gunnar Solskjaer) did a really good job. The players, they did really well.

“[Mason] Greenwood coming through, [Anthony] Martial and [Marcus] Rashford – I expected all of that. I’m really happy for them.

“They look really good for next season, I have no doubt.”

Adriano and Obafemi Martins were the last strike partnership to both score 20 goals in a single season for Inter Milan in 2004-05.#Club2020 🔵⚫️ pic.twitter.com/CafPK5DONx

Lukaku’s form in front of goal has been sensational this season. But rather than focus on individual accolades, all the striker is bothered about is beating Sevilla in Friday’s final.

“At the minute everything is going well but we keep fighting,” he said. “Records are there to be broken but we want to win.

“We need to prepare ourselves really well, recover and play again. The team is doing well and everybody is doing their best.

“We worked really hard in the camp. It’s tough but you see the results of the hard work. We want to keep going.

“We knew they were really good in combinations. So as long as we kept the centre of defence close, we knew we would not have problems as the physicality of us is too much for them.”