Home All The News ‘F*ck you and your wife’ – Lukaku, Zlatan square off 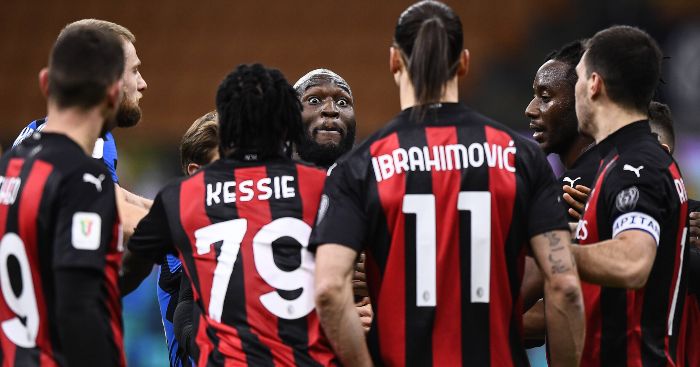 Romelu Lukaku and Zlatan Ibrahimovic had to be separated during the match and at half-time in a fiery Milan derby on Tuesday night.

Christian Eriksen’s stoppage-time free-kick secured Inter Milan a dramatic 2-1 Coppa Italia win over AC Milan in which Ibrahimovic got into a spat with Lukaku and was later sent off.

An eventful outing for Ibrahimovic saw him put the Rossoneri ahead in the derby with a 31st-minute strike.

OPINION: Klopp, Lampard and the myth of patience

The 39-year-old then got involved in a heated exchange with his former Manchester United team-mate Lukaku just before half-time.

The pair, who at one point had their heads pressed against each other, were both booked – and Ibrahimovic subsequently received a second yellow card and his marching orders just prior to the hour mark following a foul on Aleksandar Kolarov.

Lukaku then drew things level with a penalty in the 71st minute, before substitute Eriksen sent a free-kick past Ciprian Tatarusanu in the seventh minute of time added on.

After being close to blows on the pitch, Lukaku screamed at Ibrahimovic as they headed towards the tunnel at half-time, he yelled: “f**k you and your wife”.

Lukaku had clearly been upset by something Ibrahimovic said earlier with the Belgium international heard saying: “He wants to talk about mothers? Son of a b****.”

While Ibrahimovic had earlier said: “Go do your vodoo sh*t, you little donkey.”

This fight between Zlatan and Lukaku went too far I think 💀 pic.twitter.com/Gjgbv1JEkf

Both players used to represent Manchester United and Lukaku last year spoke of his respect for the Sweden legend.

“Ibra is a champion, I respect him,” Lukaku told Tiki Taka. “In Manchester I could train every day with him, that was the most beautiful thing for me. It will be nice to play against him. He is a great champion and professional.

“For me it’s not normal that he can do those things at the age of 38. He works a lot; he always gave me advice when we played together in Manchester.”