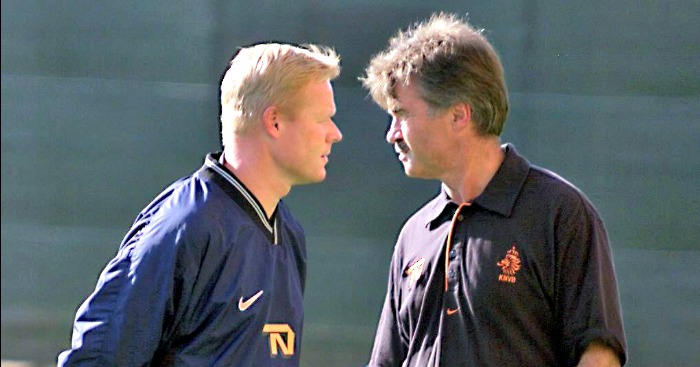 Ronald Koeman has acknowledged the “influence” Guus Hiddink has had on his managerial career.

Chelsea interim manager Hiddink coached Southampton boss Koeman while inspiring PSV Eindhoven to their first ever European Cup in 1988, and gave the retired defender his first coaching experience by recruiting him to his Holland staff for the 1998 World Cup.

The 52-year-old has since established himself as a fine manager and, while he credits the great Dutch innovator Johan Cruyff for teaching him more than any other, he also recognises Hiddink’s influence on his development.

Koeman has not spoken to Hiddink since the fallout to the the latter’s reappointment as Holland manager in 2014 – a job Koeman perhaps expected to be offered – but the Saints boss insisted he had moved on and that the pair retained “a good understanding”.

“The biggest influence in my career as a player but also as a coach is Johan Cruyff,” Koeman said ahead of Saturday’s Barclays Premier League game clash with Hiddink’s Blues at St Mary’s. “He had a big part of that, but also Guus Hiddink showed me when I was a player at PSV in detail what you need to play on a high level.

“I always had a good understanding with him. Of course, we struggled a little bit after the situation with the national team two years ago. But that’s the past and I’m still in a good understanding and relationship with Guus. I’m looking forward to seeing him on Saturday.

“(Hiddink and Cruyff) are different as a coach and of course they have a lot of things together about how they like to play football and how the team needs to play, but in different ways. Hiddink is very experienced and it’s different in a way how he treats his players.

“I remember that because we had a really strong team (at PSV). We won the European Cup in 1988 and we had really strong characters in the dressing room, but Guus was very clever and he was managing that in a very good way.

“That was the problem sometimes because strong characters sometimes fight against themselves, but he was always in a good way to manage that. That was one of his big qualities.

“If you manage at the highest level, you have great football players. It’s not to teach them how to shoot or how to pass: it’s that they play together as a team, and using the strengths of the players, and supporting that. That’s very important if you manage a big team.

“You learn from strengths of managers. If you are a player and you think, ‘One day I will be the coach’, you take good strengths of the coaches you have in your career.”

Asked if he had spoken to Hiddink since he was overlooked for the role of Holland manager to which he has since been frequently linked, Koeman – whose team have won five of their past six fixtures without conceding – answered: “No.

“But maybe something went wrong at that time. I said several things after that period but it’s now over. It’s behind (me) and it’s not any more interesting to talk about.”

Hiddink has overseen only one defeat since his return to the club in December.

Koeman added: “The (Chelsea) team is more confident and that shows why they are coming back and why they win, and why it’s difficult to beat them.

“(Eden) Hazard is now back on his level and (John Obi) Mikel is playing more now than he was.”