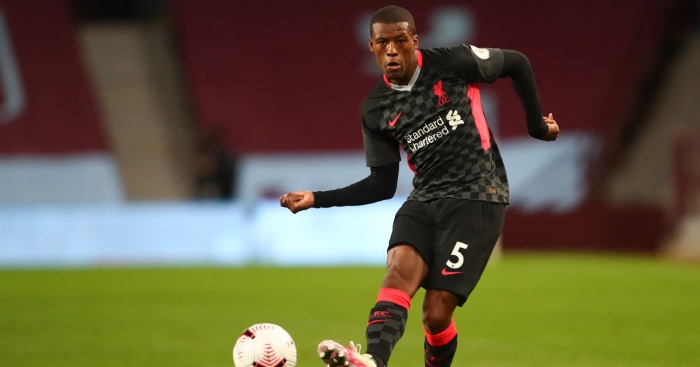 Barcelona manager Ronald Koeman is interested in signing Liverpool’s Gini Wijnaldum in January after failing to bring him to the Nou Camp during the summer.

The Dutch boss aimed to sign Wijnaldum before the closure of the international transfer window on 5th October, but the deal never materialised.

Koeman is a big admirer of the player after spending two years working with him as national team boss.

FEATURE: From Currie to Sarr: Every Championship club’s record signing

And now, Koeman has signalled his intent to sign the 29-year-old in the January transfer window, which would be another blow to Liverpool’s betting odds and title hopes, considering the blow they were dealt earlier today with Virgil van Dijk’s injury in the derby looking serious.

Speaking to sources in the Netherlands (via Liverpool Echo) about Wijnaldum’s ability, he said: “Gini has a great sense of space, he can get to the goal fantastically well from midfield, he could really add something to the team.

“But the financial situation was known to the club. His position ultimately had less priority than, for example, the right-back or the striker position.”

The Spanish giants ended up signing American Sergino Dest from Ajax for £18.9 million to solve their right back problem. They also signed Miralem Pjanic from Juventus and winger Trincao from Portuguese side Braga.

When asked about signing Wijnaldum in the January transfer window, Koeman responded: “That is certainly a possibility, yes. I will try, because I would like to have him.

“But now I can not estimate what the financial situation of the club will be in January.”

It looks like a potential deal for the Liverpool player will depend on Barca’s spending power when the time comes. If Liverpool don’t accept an offer for the midfielder, they risk losing him on a free in the summer.

His current contract is set to expire in June 2021.

Wijnaldum remains an important part of the Reds’ midfield for the moment, however. He started on the bench in their Merseyside clash against Everton this lunch time at Goodison Park.