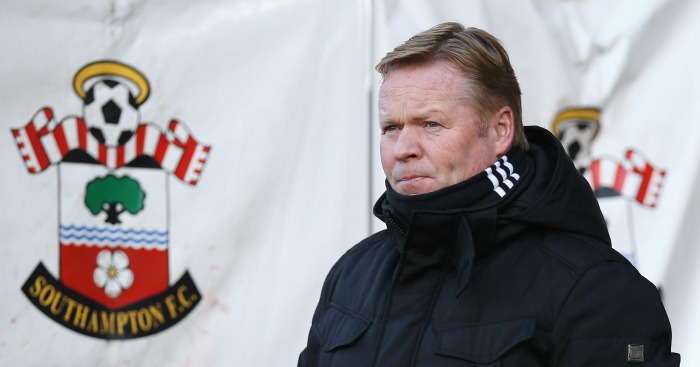 Ronald Koeman was a manager considered and dismissed in approximately seven seconds when I was writing Football365’s list of top ten Premier League managers as 2015 was coming to a close. Southampton were in 13th place, a 4-0 win over Arsenal looked like a bizarre interloper in an otherwise-rotten eight-game spell and the Dutchman appeared to be laying the groundwork for his exit with exasperated talk of Southampton being the only Premier League side to make a profit in the transfer market.

Koeman then publicly criticised the club’s Academy players and publicly criticised Victor Wanyama and Sadio Mane, while his team publicly looked a shadow of the side that finished seventh last season. Losing 1-0 to a Norwich side who have since conceded 11 goals in three games was possibly the nadir; something had to change. Newcastle offered a lesson from very recent history about the danger of believing mid-table and mid-season to be easy bedfellows.

If fortune favoured Koeman in delivering Fraser Forster back to fitness, other decisions can be attributed directly to the manager: A drastic change in formation, a recall for the forgotten Matt Targett, the forgiveness of Mane, the intelligently selective use of James Ward-Prowse and Jordy Clasie, and finally the signing of Charlie Austin. While other managers may have hoped for revival, for negative momentum to magically reverse amidst talk of “working hard on the training ground”, Koeman made things happen. The team that cruised past Watford and West Brom then eked out narrow victory at Old Trafford to record back-to-back-to-back league wins for the first time in over a year.

“In the last two matches Ronald Koeman has changed his system, playing three defenders across the back and they have won with two clean sheets – maybe he has found the solution,” said Louis van Gaal ahead of Saturday’s clash. The word ‘found’ in that sentence is key; Koeman is too good to have stumbled upon the answer. After an eight-game spell in which Southampton’s form was only better than that of Aston Villa, the Saints are now 2016’s nascent champions. It takes a rare and excellent manager to find a way to solve problems of his own making. Turning around somebody else’s mess is easy in comparison, as Alan Pardew (our manager of 2015) is discovering at Crystal Palace.

Pardew is in excellent company in a season which has seen Jose Mourinho and Louis van Gaal both appearing incapable of ‘stopping the rot’, to use a well-worn but apt tabloid phrase. And yet you could easily envisage that trophy-laden pair swapping horses mid-race and charging through the field on rejuvenated thoroughbreds. Elsewhere, the wet-nosed Garry Monk and Tim Sherwood both looked entirely devoid of answers when momentum was lost. Replacing a failing manager is like following a terrible boyfriend: Easy in the short term; not being the d*** that came before you cannot be your selling point a year later.

To be a long-term success at a club without unlimited spending power, you have to be prepared to be proactive, to make difficult decisions and sometimes to swallow your pride. That might mean playing less expansive football, sidelining your own signings or carrying both a carrot and a stick to deal with a range of personalities in the dressing room. Mauricio Pochettino is showing early signs of greatness – though we will get a clearer idea of his resilience when his Tottenham side hit a bump in the road – but it is Koeman who has impressed in recent weeks. That his Southampton side have surged past a much more vaunted Everton squad should be a source of embarrassment to Roberto Martinez, currently vying with Steve McClaren for the ‘doing just about enough to keep his job’ accolade.

Koeman may have dismissed reports of his own self-promotion for the Chelsea job as “bullsh*t” this weekend but it is still ridiculous that Brendan Rodgers and Claudio Ranieri are available at shorter odds for the Stamford Bridge post, or that there are apparently 15 better candidates for the Manchester United job. Koeman is one of the very few Premier League managers who – quite rightly – has ambitions that outstrip those of his club. His reputation is growing – repeating a top-eight finish with a weaker squad and a worse patch of form would arguably be more impressive than last season’s unlikely and ultimately failed push for a Champions League place.

“The ultimate measure of a man is not where he stands in moments of comfort and convenience, but where he stands at times of challenge and controversy,” said Martin Luther King Jnr. He was talking about far more important matters than Premier League management, but it’s a quote that Koeman could file for use at his next job interview.