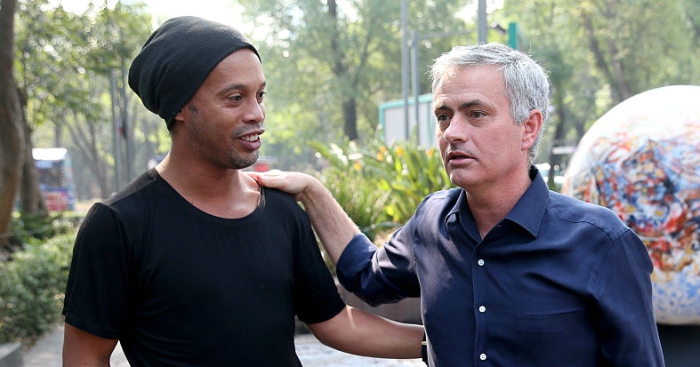 Paul Pogba “really has a lot to learn” from Jose Mourinho – if he listens to the Manchester United manager.

Pogba and Mourinho’s relationship has been strained somewhat this season, with the midfielder dropped for a number of games and substituted early in others.

There have been claims that Mourinho could sanction the midfielder’s sale this summer if he sees fit, but Pogba insists there is no issue between the pair.

Ronaldinho has implored Pogba to listen to his manager however, as Mourinho is “one of the best coaches in the world”.

The legendary Brazilian has likened the situation to his time at PSG, where then-manager Luis Fernandez said the Brazilian had a “problem” adjusting to “the lifestyle of a top-level sportsman”.

The pair never saw eye to eye, and Fernandez was sacked at the end of Ronaldinho’s second season in Paris in 2003. The player himself joined Barcelona that same summer.

“He knows the substitutes’ bench, like me at Paris Saint-Germain with Fernandez,” he told Canal Football Club.

“It is not the same, when Mourinho tells you that you’re on the bench you have to respect that, the other guy, a little less.

“I think Paul really has a lot to learn from Mourinho, who is one of the best coaches in the world. A coach who has won so many titles should be respected. In my case, it was the opposite.

“He is already in a big club and he has everything needed to make history, whether it is this club or another, he has to be where he feels happiest.

“He can win the Ballon d’Or, without a doubt.

“I see Pogba as a friend, I don’t see myself as his idol. He is young, talented and he has the ability to play anywhere, he can play in a free role, defensive, as a runner or attacking.

“He has the characteristics of a player who can fill any position, he can make history.”