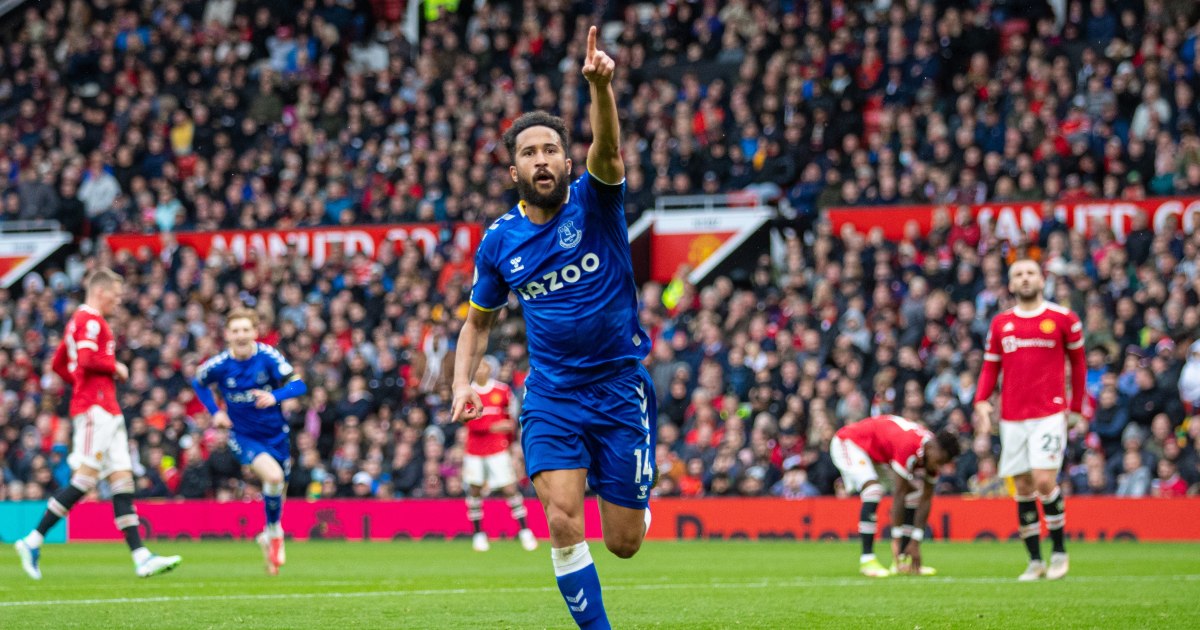 The signing of Andros Townsend was almost apologetic from Everton but it was perfectly pragmatic, writes Steve Sanders.

In the 66th minute at Old Trafford on Saturday, there was a familiar sight. A lightening counter-attack, full of power and speed, was finished off emphatically and followed by the now iconic ‘siii!’ celebration.

But on this occasion it was Andros Townsend and not Cristiano Ronaldo who delivered the unerring final blow.

It felt apt that the celebration didn’t quite go as planned. It looked like a slightly embarrassed schoolboy trying to mimic their hero. Because, as signings from the summer transfer window go, the free transfer of Townsend to Everton was the antithesis of Ronaldo’s glorious return to Man United.

The unveilings of both players epitomised the difference in expectations. While the announcement of Ronaldo’s return was breaking social media records, Townsend and Everton were almost apologetically explaining his free transfer move from Crystal Palace. He spoke of the fact that he “liked to score a goal or two” and “worked hard off the ball”. Not exactly words to inspire a fanbase already angry at the appointment of a manager who had dismissed them as a ‘small club’.

Allthough Townsend and his fellow bargain basement signing Demarai Gray have exceeded realistic expectations, their success is not a fluke. Rafa Benitez identified a weakness in the Everton squad in the wide areas and wanted to improve the supply line to Dominic Calvert-Lewin (he was listed as a winner in our transfer window list), Richarlison and another Pound Shop purchase Salomon Rondon. He has worked with Townsend before in a short but fruitful spell at Newcastle.

This was a manager working within a budget and making intelligent decisions to improve a clear weakness in his squad – a lesson a number of his peers with significantly larger budgets should learn.

The term ‘clever recruitment’ was used repeatedly in the summer. We were told that the lavish spending on Ronaldo, Jadon Sancho and Raphael Varane were all examples of clever recruitment. Romelu Lukaku signing for Chelsea for £97.5m? Of course, that was very clever. PSG signing Lionel Messi, Georginio Wijnaldum, Sergio Ramos and Gianluigi Donnarumma for ‘free’ was used as a stick to beat various other clubs; Norwich and Burnley were clearly sleeping when those deals were negotiated.

I am fortunate that I have an eight-year-old FIFA addict of a son, so I have a simple theory in relation to transfers. If Oscar, who plays exclusively as 5-star teams, tells me that a signing is a great one, that is not clever recruitment; that is a wealthy club buying a player that 99% of other clubs would never be able to afford, whether they are ‘free’ or not.

In the past, Everton have been as guilty as anyone of failing in the transfer market. To describe their recruitment as scattergun since Farhad Moshiri bought the club would be an affront to those shots that landed successfully. Every summer Jim White would tell us just how fantastic their business had been, purely based on money spent and volume of players acquired. The summer of 2017 was a personal highlight, with a new number 10 seemingly being unveiled on a daily basis, but you could look through every recent transfer window and analyse the players that were always destined to fail.

This summer, with the spectre of Financial Fair Play hanging over them, Everton were forced into a new approach. Benitez wasn’t a popular appointment, but he has shown throughout his career that he can maximise the abilities of the players at his disposal. As well as the clearly targeted purchases, he has already shown that he can effectively coach the existing players and give them the platform to perform at their highest level. Just look at the balance in the midfield now; Allan is starting to get the plaudits he deserves as one of the league’s best defensive midfielders and Abdoulaye Doucoure looks like a player re-born in a more offensive role.

But it is the early season success of Townsend that exemplifies the skills that Benitez possesses. After drifting for the last few seasons at Crystal Palace, there was very little reported interest in Townsend before Benitez and Everton unexpectedly signed him. But Townsend has already reminded the sceptics of the skills that earned him a regular place in Mauricio Pochettino’s first version of Tottenham, as well as 13 England caps.

There are some managerial relationships with players that just seem to work. If Townsend continues this form, his alliance with Benitez could be added to legendary relationships like Neil Warnock and Paddy Kenny, Ricardo Carvalho and Jose Mourinho, Christian Panucci and Fabio Capello and Harry Redknapp and, well, 90% of the players he signed for Portsmouth.

Everton have previously been seen as an example of how not to conduct transfer business, but this summer their straightforward approach of targeting players in positions that were clear weaknesses in their squad looks like genius. There are a plethora of compelling reasons why Man United brought Ronaldo back, but neglecting to upgrade their midfield is looking like a more baffling decision as each week passes.

There are other teams that seemed to focus on the wrong areas when strengthening their squads in the summer. Jack Grealish is a wonderful footballer, but surely that £100m would have been better spent on a striker rather than yet another temptation for Pep to play out of position in a pivotal match. Elsewhere, Tottenham’s investment in Bryan Gil and Pape Sarr may prove shrewd in the long term, but they will be forced to struggle through to January at least with no obvious creative midfielder.

In January, we can expect another raft of Premier League signings. We will be told by pundits about the clever business that the teams who spent the most money have conducted.

But don’t be fooled, the best signings are not necessarily the most expensive or those with the biggest social media followings. The best signings are those that successfully integrate themselves into a new club and improve a position where there is comparative weakness. They are transfers like Andros Townsend’s, a move genuinely worthy of the title of ‘clever’. Just don’t ask him to celebrate it.