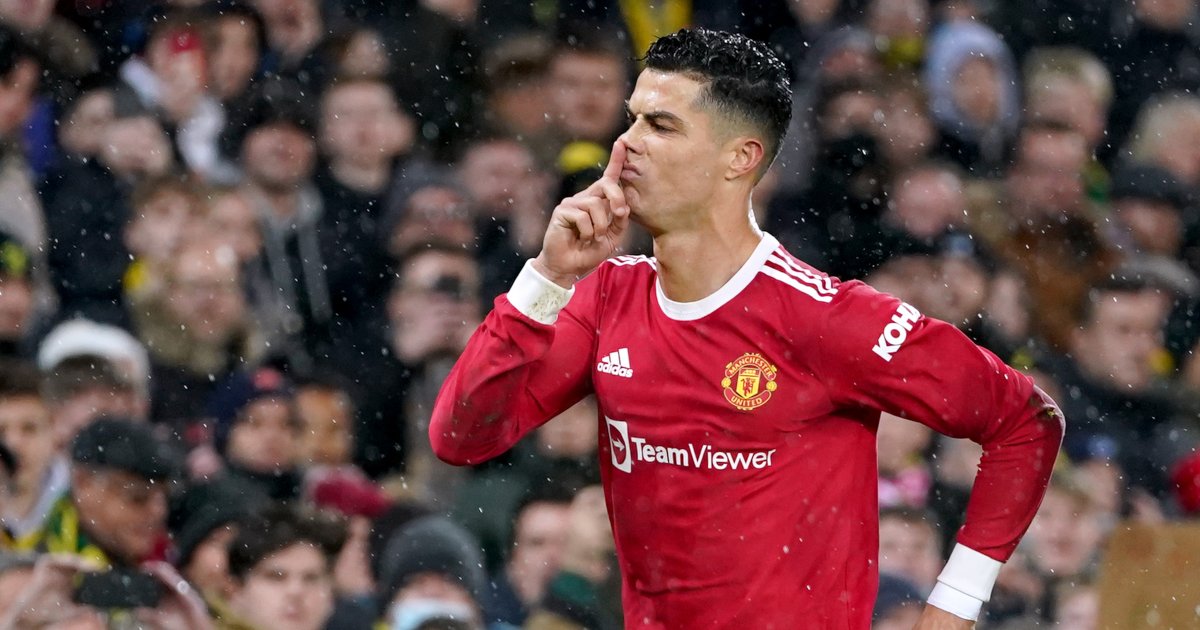 ‘CRISTIANO RONALDO won a penalty and then smashed his 12th goal in 18 games since rejoining Manchester United.

‘By anyone’s standards, it is an exceptional record.’

And do you know what is an even more exceptional record? 13 goals in 18 games, which is Ronaldo’s actual record since rejoining Manchester United. There is literally a stats box on the opposite page so somebody really should have spotted that error before it went to print.

But aside from the small matter of a factual error in the opening line, what on earth has possessed Wyett to watch Manchester United labour to a win and decide that the only forward to manage a shot on target should be the subject of his negativity? ‘Is time Ronning out for Cris?’ No but it’s surely running out for newspapers.

Jadon Sancho was hauled off after 66 ineffective minutes and Bruno Fernandes joined Marcus Rashford in being pretty ‘awful’ (Wyett’s own word) while Ronaldo ’caused panic in the Norwich defence’. But yes, let’s suggest that ‘STRAIN OF THE PREM IS STARTING TO SHOW’ on a player who has scored eight more goals than any of his teammates this season.

Alternatively…
As if to illustrate the point, David McDonnell watched the same performance and listened to the same post-match quotes while on Daily Mirror duty and wrote that ‘Manchester United simply cannot afford to be without’ Ronaldo.

He writes that ‘the onset of age has proved no barrier to his ability to bend games to his will, as he proved again on Saturday’.

So is time not Ronning out for Cris after all?

Hend game
‘Scarf ace’ is a hell of a headline. It would have been ever so slightly better if The Sun were writing about scarves but we simply cannot have everything. Whether the genius of ‘scarf ace’ is diluted by the stand-first of ‘But wool Jor ever join Kop legends?’ is a question for the readers; we lean towards ‘f*** yes’.

After another victory for Liverpool that keeps them within a point of Premier League leaders Manchester City, the obvious question of course is why Jordan Henderson is not afforded the same love as Steven Gerrard by Liverpool fans. We feel like there is an obvious answer to this question but let’s allow Ken Lawrence to ponder.

‘ONE DAY it should be like this for Jordan Henderson, too.

‘There should be the warm round of applause pre-match, and the serenade at the end – as directed towards the last man to wear the famous armband on his first return as a manager.’

‘Whether the current captain will ever be accorded the same legendary status as Steven Gerrard is open to question, however.’

Nope. No, it’s not. He will not be accorded the same legendary status because – and this seems important – he is nowhere near as good. Or as Liverpudlian. Like nowhere near.

‘Whether it’s a charisma thing or just a Scouse thing – or even one of natural ability – Henderson has always had to work his socks off for the kind of recognition that Gerrard always enjoyed.’

‘Or even of natural ability’? Even? We think you might have just stumbled on the answer to the great mystery, Ken.

‘Henderson does not get lauded for the fact he also lifted the Champions League trophy above his head in 2019 like Gerrard did 14 years earlier.’

Odd that. What with one captain pretty much single-handedly dragging his team to victory in an epic final and the other being a part of a routine win in which Virgil van Dijk was the man of the match.

Mediawatch very much doubts that Henderson would appreciate The Sun of all publications campaigning for equal standing with Gerrard on his behalf.

Salah days
Over in the Daily Mirror, Sam Quek is the latest Liverpool fan to completely misunderstand the concept of an award for a calendar year as she barfs some absolute guff about the Egyptian’s seventh place in the Ballon d’Or being ‘ridiculous’.

And in 2021 Salah has scored 36 goals for Liverpool in all competitions while Lewandowski has scored 53 goals. Even if you insist on adding assists, Salah still comes up 12 goal contributions short despite playing about 600 more minutes of football.

Actually, Salah is currently behind Kylian Mbappe, Lewandowski, Erling Haaland, Karim Benzema and actual winner Lionel Messi for goal contributions in 2021. He also – and this really is quite crucial – won absolutely f*** all in 2021.

No Salah days
Spare a thought for the Mirror‘s Mike Walters, tasked with writing a convincing argument for Jorginho as Fans’ Footballer of the Year. He never once mentions Mo Salah but here’s the headline:

For once, he wasn’t even being wacky.

I can explain
‘Champions League draw explained – and why an all-English final could happen for third time in four seasons’ – The Sun online.

Is it because there are four English teams and they are quite good? Yes and yes.