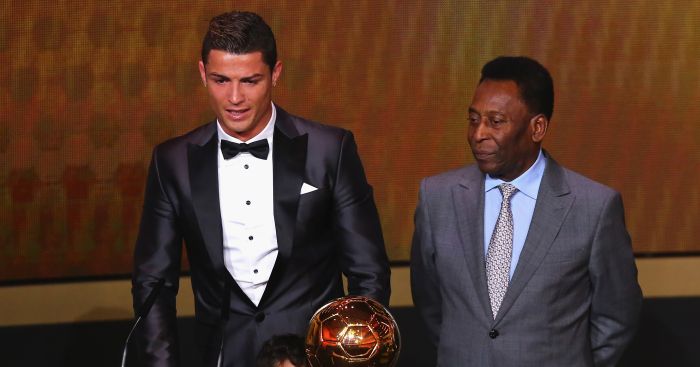 Brazilian football legend Pele reckons Cristiano Ronaldo is the best player in the world and insists the Portuguese international would be the first name on his teamsheet over rival Lionel Messi.

Ronaldo and Messi are widely recognised as the two best players in the world and Pele’s glowing endorsement is likely to boost Ronaldo’s confidence ahead of Portugal’s Euro 2016 opener against Iceland on Tuesday evening.

Despite appreciating the pair’s abilities, Pele is disappointed that world football doesn’t have more “great players”.

“At the moment the best player in the world is Ronaldo,” Pele told Sportsmail.

“I admire him, if I had to set up a national team he would be my first pick.

“But in the meantime I feel sorry because today and the last five years, you just mention two big stars. Some years ago, you had a lot of players.

“You have Bale and Neymar, but they are not enough. You used to have two or three players in one team who were stars. Now there are that many in the world. It’s a shame. The game deserves more great players.”

Pele finds it hard to compare himself or Diego Maradona to Ronaldo, but thinks the Real Madrid forward plays more like the Brazilian Ronaldo.

“Maradona, myself, it’s a little bit different than him,” he said. “Cristiano is higher up the pitch, more central, more direct, more for scoring. But what is important is he is a player who decides the game. He is a player who scores goals. That’s the same.

“But we cannot compare Pele and Maradona with Cristiano because we were players who came from behind. We played deeper. He plays in front. He’s more like [the Brazilian] Ronaldo. This you can compare.

“It’s the same with Messi. They are two players with completely different styles. Messi is playing more from midfield, he is an excellent player and passer. But Ronaldo is more forward, the No 9, the striker. He has a different style to Messi.”