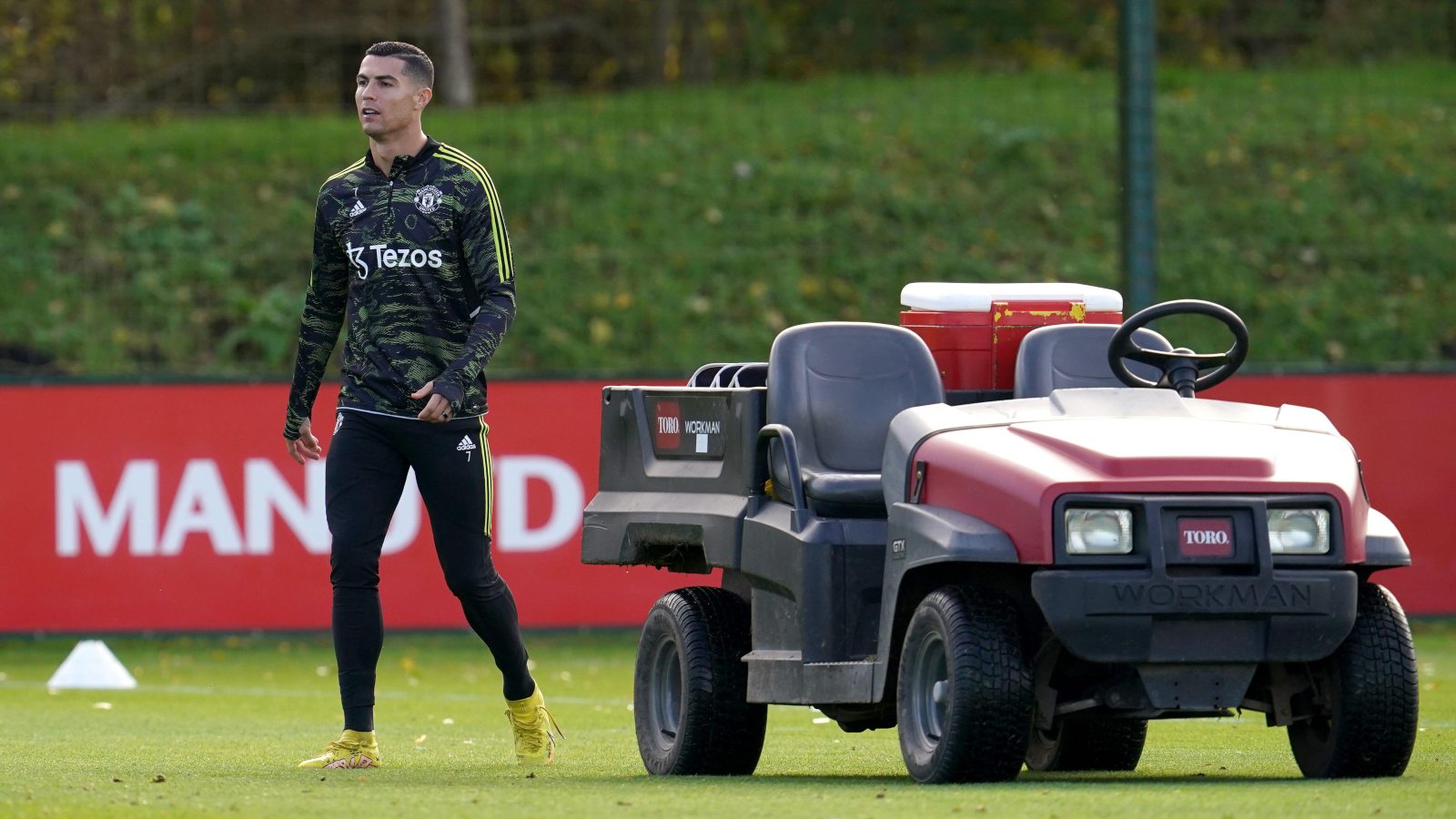 Well done Ronaldo for turning up to work and not putting yourself in breach of contract. Would he turn up at all if the Erling Haaland transfer had not been BLOCKED?

Quick question: Can you BLOCK a transfer that would have been utterly impossible to complete?

The Sun, among others, are having their fun with quotes from Ralf Rangnick about Manchester United’s refusal to sign anybody in January, but let’s not pretend that Erling Haaland would have even considered joining Manchester United in January. Indeed, we know that United were nowhere near Haaland’s shortlist at all, at any time. No way no how. It would have been utterly ludicrous for Haaland to join United in January.

So did Rangnick ‘reveal’ this so-called BLOCK? Well, did he balls.

This is what he said:

“That’s why we were already discussing players like Josko Gvardiol and Christopher Nkunku from RB Leipzig. Those were names that were realistic. We also talked about Alvaro Morata, Luis Diaz, Dusan Vlahovic and, as I said, [Erling] Haaland when they were still on the market.”

Rangnick did not put Haaland on the ‘realistic’ list; he put him on the ‘on the market’ list and as such he was ‘talked about’. And presumably that discussion ended with ‘and he’ll never f***ing join us anyway…’.

Over at MailOnline they tell us:

‘Ralf Rangnick has reportedly revealed the star-studded shopping list that he gave Manchester United in order to reinforce their ailing side last January, only to be denied by the club’s owners.’

Can you ‘reportedly reveal’ something? Surely you either reveal it or you don’t. Anyway, about this ‘star-studded shopping list’…

“There was no such [transfer] dossier, and it was never wanted by the club.”

#AnnounceBruno
There is an even bigger Manchester United story on the Mirror website.

First, it’s absolute bollocks. But then you knew that already.

What we get are these quotes from Dwight Yorke:

“I think with the Maguire scenario, looking from the outside in at the club without knowing all the details, I think he’s been told he’s going to be the captain going forward.”

So a man, who by his own admission has no knowledge of the scenario, is speculating that the player who has captained Manchester United 12 times this season might have been told that he will be the Manchester United captain. And that’s the story.

The eagle-eyed among you may have spotted that there is no ‘announcement’ here. Because there is no announcement to make and Harry Maguire remains Manchester United captain.

Don’t get me Ron
We must now pause to applaud Ronaldo’s reaction to being punished for being a man-baby during last week’s win over Tottenham when he refused to come off the bench and walked out of the stadium before the final whistle.

This is from the Manchester Evening News propaganda machine:

‘Cristiano Ronaldo’s reaction following his explosive refusal to come on against Tottenham has been a positive one.’

Well done, Ronaldo. What a man.

They detail his unacceptable behaviour but then conclude:

‘After such a confrontation it would have been quite easy for Ronaldo to stand his ground even further, dig his heels in and make the situation truly untenable.’

Not really. He would have been in breach of contract.

‘There is precedence for this. In 2011, Carlos Teves refused Roberto Mancini’s orders to come on for a Manchester City match against Bayern Munich.

It’s Tevez but carry on…

‘Mancini was understandably furious – a million times more publically than Ten Hag – and similarly punished him with fines and solo training. In response, Tevez fled to Argentina and didn’t return for months.’

That’s one reading of the situation; the other is that Tevez refuted the claims, he was initially suspended, Manchester City launched an investigation and placed Tevez on gardening leave while all parties looked for a transfer.

So not a precedent for the Ronaldo situation at all.

‘If Tevez could come back from that, Ronaldo certainly can. There have been no statements of anger or discontent from the Ronaldo camp over the past week. Instead of pouring more fuel onto the fire, he issued an apology and has quietly gone about training ahead of a return to action.’

Yes, we can confirm that a man has turned up to work. Well done that man.

Tales of the unexpected
‘NO-ONE expected this a month ago – certainly not Jurgen Klopp,’ writes Charlie Wyett in The Sun.

‘On the night of his worst night as Liverpool manager, a 4-1 humiliation at Napoli, Klopp would have laughed had you told him his team would be through to the last 16 with a game to go.’

A month ago Liverpool had beaten Ajax 2-1 and were facing a pretty poor Rangers side in back-to-back games, so yes, many of us did expect exactly this scenario.

And we suspect Klopp would not have laughed at all; his memory probably stretches back all of three years to the last time Liverpool opened their Champions League campaign with defeat at Napoli and still qualified for the last 16 with ease.

‘If we are being realistic, Liverpool have been lucky to feature in the same group as both Ajax, along with Rangers, who have been absolutely hopeless.

‘The fact Ajax have conceded 15 goals and Rangers 19 sums it up.’

Exactly Charlie, so why the hell did you pretend this was anything close to a surprise?

Pesky fact: Darwin Nunez has scored six goals in 13 games; it’s not been that sodding tough.

Salah days
The Liverpool Echo are having no truck with the idea that scoring just three Premier League goals is a poor season from last year’s Golden Boot winner:

‘For a player supposedly having an underwhelming season, Salah has now scored 10 times – joining Erling Haaland and Harry Kane as the only Premier League players to have reached double figures in all competitions.’

He’s not ‘supposedly having an underwhelming season’, fellas, he absolutely is. Six of his ten goals have come against Ajax and Rangers and, as we have already established, they are really rather sh*t.

The headline on that piece of content, by the way, is this:

And how exactly has Paul Scholes been ‘proved right’? Because Jordan Henderson claimed his first assist since February, of course. He must be absolutely buzzing.