Home All The News Ronaldo: One of the happiest moments in my career 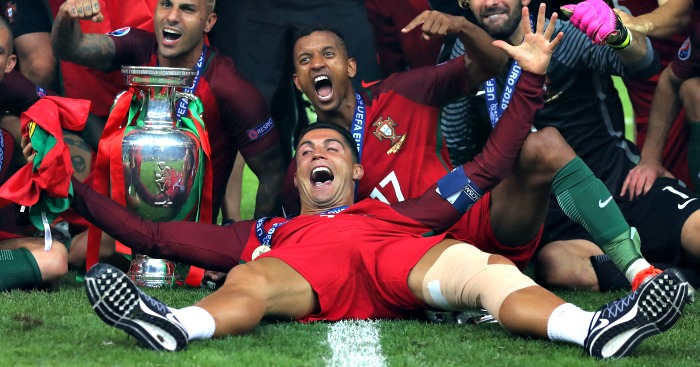 Adept at making it to the semi-final stage, only once before this week’s clash with Wales had the Portuguese managed to progress it to the showpiece finale.

When they did it 12 years ago on home turf they lost to unfancied Greece – a defeat Ronaldo helped make amends for at the Stade de France on Sunday, albeit being on the field for only 25 minutes.

Forced off through injury, the 31-year-old instead cajoled his team-mates as they went onto win their first-ever major tournament thanks to substitute Eder’s long-range, extra-time strike. “Worst champions ever”? It does not matter; winning is the only right way.

“We beat France and I’m delighted,” Ronaldo said, fresh from lifting the trophy.

“This is one of the happiest moments in my career. I’ve always said I wanted to win a trophy with the national team and make history. And I did it. Thank God, things went well for us.

“I’d like to thank my team-mates, our coach, our wider team in this Euro, the Portuguese people and all the ex-pats who were always with us, cheering for us from the beginning.

“This is a unique moment for me, for all the Portuguese people and it’s unforgettable.”

Portugal showed they are far from a one-man operation against hosts France, defending resolutely and outsmarting France.

“This was something I have wanted for a long time now, ever since 2004. I asked God to give me another chance.

“The Portuguese people deserve this, our players deserved this.

“Unfortunately, things didn’t go well for me. I injured myself in the first few minutes, but I’ve always believed in these players.

“They have quality and ability, along with our coach’s strategy to win.”