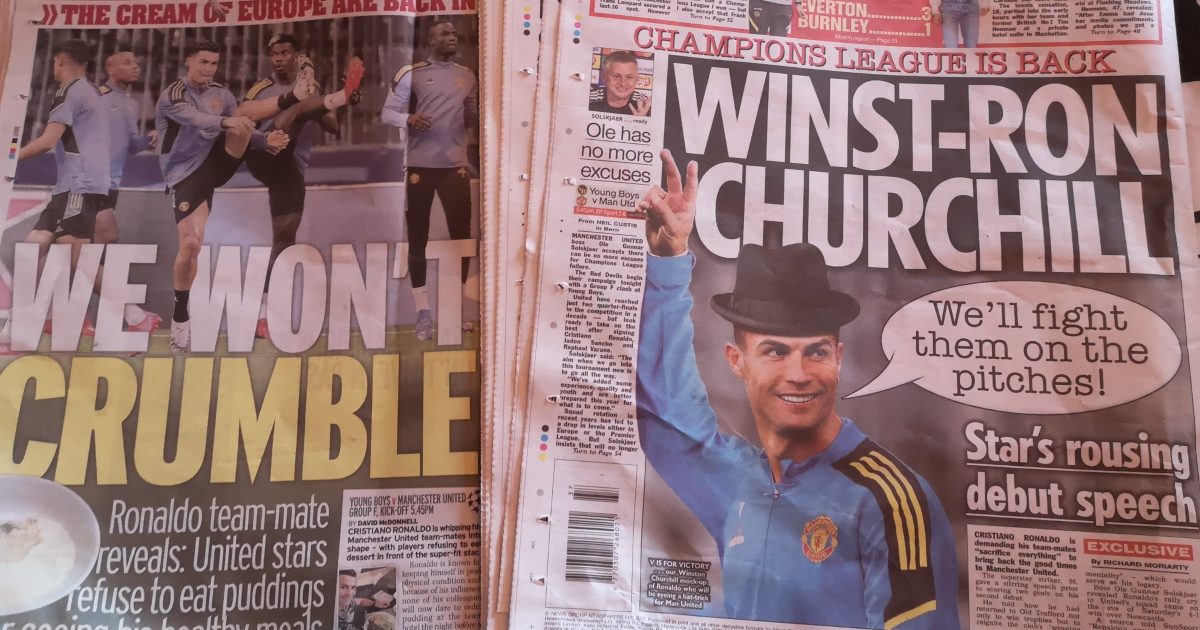 Church of the poison mind
Mediawatch cannot work out whether The Sun‘s exclusive about Cristiano Ronaldo’s speech to his Manchester United teammates is so brilliant that both Neil Custis and Richard Moriarty wanted to claim it (Custis is by-lined online and Moriarty on the back page of the newspaper) or so risible that neither wanted complete credit. We suspect the former because actually getting the full transcript of a speech delivered behind closed doors is quite the scoop, though getting every word of a speech delivered behind closed doors suggests this was a scoop handed to The Sun by somebody at the club as the cult of Ronaldo is cultivated.

Still, it’s a cracking exclusive, and somebody (two people?) has to open those e-mails.

The real fun is in the headline. Oh my.

It’s pointless to point out that Churchill made a speech as the Allies tried to save the world from the tyrannical, fascist rule of Nazi Germany while Ronaldo made a speech before Manchester United played Newcastle United – a team they had beaten by an aggregate score of 11-3 over their last three meetings – because speech = Winston Churchill. Nobody else has ever made a speech.

How long did somebody stare at the words ‘Winston Churchill’ and ‘Ronaldo’ before ‘WINST-RON CHURCHILL’ appeared? Not long enough, it seems.

And what better way to illustrate this than by a good old-fashioned mock-up of Ronaldo as Churchill himself, complete with hat? And with a speech bubble of ‘We’ll fight them on the pitches!’ because playing Newcastle United at Old Trafford is exactly like turning back the tides of hate on the beaches of France.

Some days it is so, so difficult to work out why print media is dying.

Proper gander
Anybody familiar with the internet (some of you may be) cannot fail to be amused by the final line of that naked propaganda about Ronaldo and his rousing speech.

‘Following the emotional speech, the players gave Ronaldo a round of applause.’

And then the whole bus clapped?

At first they were afraid…
Buried in Neil Custis’ story previewing Manchester United’s clash with Young Boys are quotes from Ole Gunnar Solskjaer being a bit prickly about Lee Grant’s claims that nobody ate pudding on Friday night because Ronaldo is such a healthy eater.

“That’s obviously a joke by Granty in a setting with some mates, it’s not as though we were eating junk food before he came in and he’s changed it all,” said Solskjaer.

Obviously that did not stop The Sun going with this headline online:

The ‘SCARED’ in capitals is particularly interesting because Lee Grant never said that word, joking or otherwise.

And if you’re Irish, it gets even more serious…

‘Man Utd aces too petrified to eat sweets in front of Ronaldo as ‘not one player touched the apple crumble’ – Lee Grant’ – The Irish Sun.

According to the dictionary definition, that means they were ‘so frightened that one is unable to move’. Good to see everybody is keeping perspective.

Crumbling industry
Mediawatch likes to poke at The Sun, of course (fish, barrel etc), but at least they did not splash Lee Grant’s joke on talkSPORT from Monday morning on their back page on Tuesday morning with a picture of an apple crumble like the Mirror.

Why, oh why, are people not buying newspapers anymore?

‘CRISTIANO RONALDO enjoyed a reasonably priced meal out with his proud mum Dolores Aveiro on Sunday evening before she returned home.’

And this is illustrated – as all good football stories really should be – with a picture of his girlfriend’s arse.

Martial law
Over on the Mirror website, their quest to squeeze more clickable drops out of Ronaldo leads them down a ridiculous path with this headline, happy to suggest that Ronaldo is about to be dropped:

‘That is why Solskjaer is more than likely to start Ronaldo in Switzerland, forcing him to make an unpopular decision as players who would expect game-time in matches such as this are left out.’

So the ‘unpopular decision’ is not likely to be unpopular at all with anybody but perhaps Anthony Martial. Thanks. For. That. And curse you for making us click.

Yes, but…
Mediawatch is struggling to comprehend this sentence about Thomas Tuchel in The Sun:

‘The German coach led the Blues to Euro glory – but only after axed predecessor Frank Lampard secured a last-16 spot.’

The man wins the Champions League by beating Atletico Madrid, Real Madrid and Manchester City and you are questioning his achievement because Lampard helped Chelsea past Krasnodar, Rennes and Sevilla first?

Have a bloody word.

Forest ire
Even for Stan Collymore, this is a really quite astonishing take on the Nottingham Forest situation in the Mirror:

‘I SENT a WhatsApp to a confidante of the owner of my old club Nottingham Forest last week – it was read but there was no reply.

‘Which pretty much sums up why the club is in such a mess and has been for 20 years.’