Home Manchester United Ronaldo to the rescue of the cursed No. 7 shirt 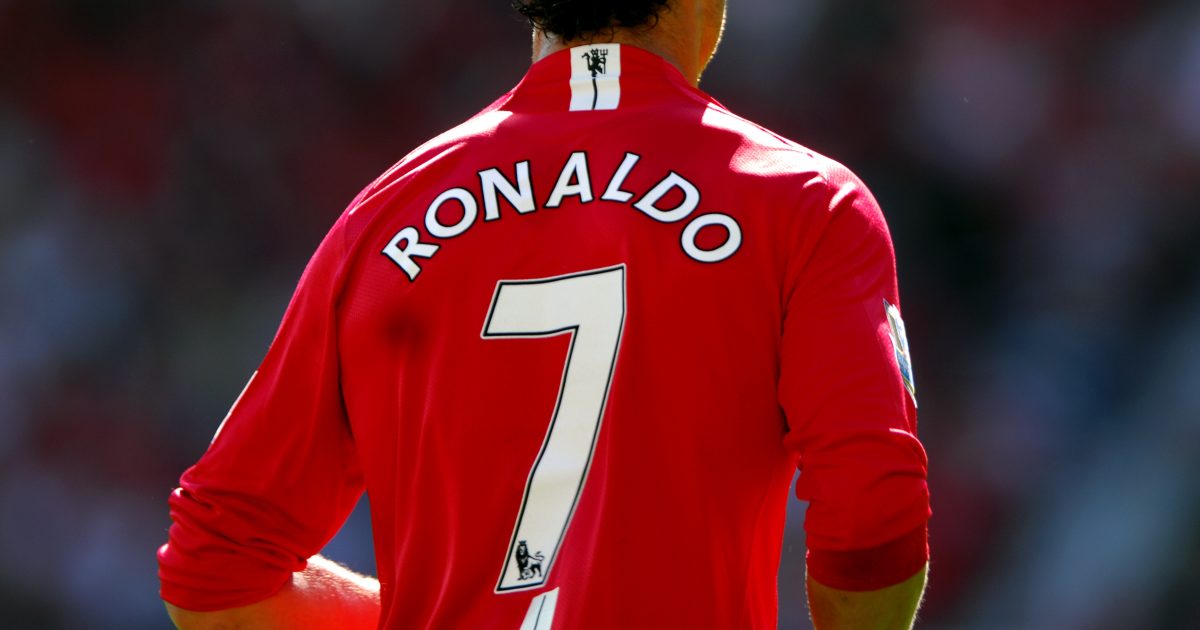 Cristiano Ronaldo back in the red of United is the stuff of fairy tale, of myth, of lore. In other words, something we could only dream of, or see in a legends game in 20 years, or make possible on FIFA and Football Manager as this writer did on FM2020 – signing a 36-year-old Ronaldo on a cut-price deal from Juventus to team up with Mason Greenwood and Jadon Sancho.

Fate? Not quite, but like much of the last 18 months, this feels truly stranger than fiction.

While this might very well be a fairy tale, a story not even Walt Disney could pen, the fate of the fabled number 7 shirt at United has had all the hallmarks of a Stephen King novel for most of the intermission between Ronnie’s first and second act. Edi Cavani being a notable exception.

The shirt has always been United’s most special and associated with some of the most iconic figures in club’s history – from George and Robbo to King Eric and Becks.

That boy Ronaldo more than lived up to the pressure of the shirt, which was first handed to him when he arrived at Old Trafford in the summer of 2003. What followed were six glorious years, when boy became man, starlet became superstar, and United became champions of England, Europe and the world.

However, when he eventually left for pastures new in Madrid in 2009, the 7 shirt hung limply in dressing room waiting for a new hero to don it. Who would step up to take it? This writer, doing the Irish equivalent of the GCSEs at the time, scrolled BBC Transfer Gossip, thinking the £80m transfer fee and the famous shirt would go to a player of the quality of Benzema or Ribery.

Instead, the dark(er) days at United began – the Glazerification of the club, only stalled by the genius of Sir Alex.

The 7 shirt went to Michael Owen, a free transfer signing from Newcastle, a Scouse icon and a player with a worse injury record than Darren Anderton. At least we got that flying French winger… anyone fancy re-signing Obertan?

While Owen had his moments, notably City 4-3 and the League Cup final, he never lived up to the shirt number, not that he was ever going to manage that as a squad player in the twilight of his career.

Departing in 2012, the shirt was inherited by a fellow 2009 recruit, Antonio Valencia, who had carved out a reputation as an old-school winger – black boots, by-line, crosses. Solid and efficient, if not spectacular and exciting. His personality never lived up to the pressure of the shirt, as he swiftly retreated to his familiar and more fitting number 25, and eventually to right-back.

The number 7 lay untouched for the year of Moyes – thankfully. Who knows what ill would have come of it otherwise?

Despite starting off like a rocket with goals vs QPR and Leicester (the latter arguably being the peak of King Louis’ reign as we dreamt of Total Football coming to England) the Angel did not fit in with the Red Devils – and more specifically the turgid-not-total-football Van Gaal employed. This, in addition to family issues and a desire to play in Paris, led to his departure after one season to PSG – where he, of course, returned to his previous form.

And now it turns out that he did not give a f*** about the 7 shirt.

Memphis Depay came next, surviving the second season of his supposed mentor Louis but not by more than 18 months, leaving for Lyon, possibly in the same Rolls Royce he drove to the reserves game.

Surely it couldn’t get any worse? Well just like most horror films, it did, with the latest villain arriving in the form of Alexis Sanchez – one of the best players in the league, surely a guaranteed success. Sadly, his performance on the piano outmatched anything he did on the pitch, as he seemingly lost his talent, in football’s version of Space Jam. A major pay-off (and Inter Milan’s desire to sign United deadwood) lifted this albatross.

The curse was finally lifted by possibly its most unlikely hero – the 33-year-old deadline day signing Edinson Cavani, a panic-buy after Woodward unsurprisingly stumbled all summer over Sancho. Goals came, and a cracking song followed – possibly the only one for any 7 since 2009.

So, we say thank you to Edi for lifting the curse, keeping the shirt warm, and readying it for its return to its rightful owner. It’s time for his encore.