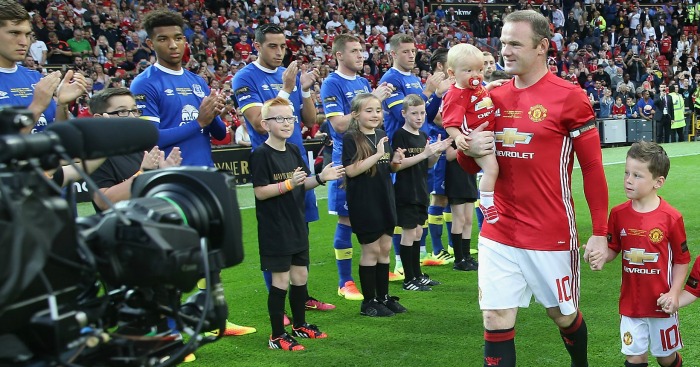 Wayne Rooney has confirmed he has rejoined Everton from Manchester United.

The 31-year-old has issued a statement thanking United for the past 13 years and expressing his happiness at returning to his boyhood club.

Rooney, who was filmed at Everton’s training ground on Saturday, left the Toffees for Old Trafford in 2004 and returns after winning five Premier League titles and a Champions League with United.

Everton announced Rooney had signed on a two-year deal for an undisclosed fee. We think it’s a mistake, but hey, it’s lovely.

Rooney said: “It is some time since I said that the only Premier League club I would play for other than Manchester United was Everton, so I am delighted that the move has happened.

“Thirteen years ago I went to United with the intention of winning trophies and I have been fortunate to be a part of one of the most successful periods in the club’s history.

“I have come back to Everton because I believe Ronald Koeman is building a team that can win something and I look forward to playing my part in making that a reality for the club I have supported since a boy.

“I’m excited, and I’m excited by the signings that the club have made. This club is moving forward. This football club should be winning trophies and we’re taking huge steps to being involved and trying to win trophies.

“The first game back will be an emotional day for me and I’m looking forward to it. I’m not just coming back because it’s the team I support, the team I grew up playing for – I’m coming back because I feel the club can move forward and be successful. I want to be part of it. There will be pressure on me to perform, but I’m ready to go. I believe I can help move this club forward and be more successful on the pitch.

“With the new stadium in the pipeline, it’s an exciting time to be an Everton player, to be an Everton fan. It’s on us players to make those times even more exciting by giving them good performances and try to help them be successful and bring trophies to the club.”