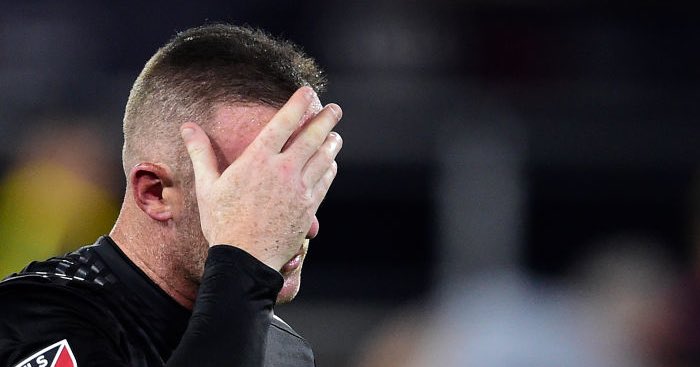 Wayne Rooney was sent off by VAR after thrusting his forearm into an opponents face in DC United’s latest defeat.

Rooney was dismissed in the 24th minute of the Washington side’s 2-1 loss to New York Red Bulls, following a VAR review.

At a corner, Christian Casseres attempted to block Rooney, before Rooney raised his arm into the Venezuelan’s face.

This comes just days after an altercation with a fourth official in Vancouver in which the former England captain vented his frustration at the standard of refereeing.

“Every f*****g game”, Rooney appeared to shout at the fourth official.

The incident against New York Red Bulls was missed by the referee but Man Utd’s all time record goalscorer was sent off after he checked the pitch side monitor.

It was the second red card of Rooney’s MLS career, which will come to an end this year, after Rooney agreed to join Derby County as player-coach in January.

Rooney insisted he shouldn’t have been shown red and was asked post-game why he was dismissed.

Rooney said: “Ask the referee. I think anyone who knows the game of football can see what the intent was. It was to try to ease the player out.

DC United have just six regular season matches remaining and are not certain of reaching the play-offs after a run of just one win in the last seven.

Seven teams in each conference move into the post-season, and while United are currently fifth, they sit just five points clear of eighth place Orlando City.