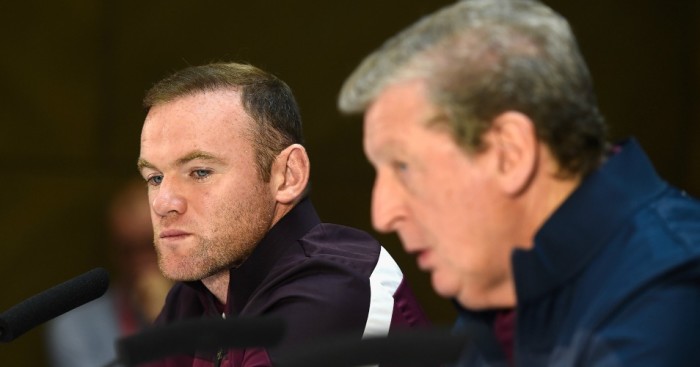 Roy Hodgson says Wayne Rooney is still “the most important figure” for England, but the skipper will not start Friday’s friendly against Spain.

Hodgson moved to quash any potential speculation over his decision, insisting he is simply keen to give all of England’s forward players a chance to press their case ahead of Euro 2016, but more worryingly is the fact that England boss Hodgson still rates the badly out-of-form Rooney as the nation’s kingpin.

The Manchester United striker will, fitness permitting, instead feature against France next Tuesday at Wembley.

Hodgson said: “Wayne’s with me today because he’s the captain of our team, he’s the most important figure as a result, but he actually won’t start the game tomorrow.

“I’m telling you that because Wayne and I are very anxious that we’re not trying to fool anybody or bamboozle anybody when he’s sat alongside me.

“That’s for the very simple reason that we’re looking at various combinations.

“Wayne is pencilled in against France on Tuesday.”

Rooney understands the need to rotate the squad, adding: “It’s important especially in these games that the manager has a chance to see as many players as he can before the tournament in the summer.

“As a player you want to play but you have understand that there are bigger things to consider.”

Fellow striker Jamie Vardy, who has scored in his last nine Premier League matches, is doubtful due to a niggle he picked up in Leicester’s victory over Watford.

Hodgson added: “Jamie Vardy is struggling with a knock he picked up on Saturday. We’re monitoring it, we’re still working on it but it looks unlikely at this moment in time that he’ll be able to play tomorrow.”

If neither player features then that leaves Harry Kane as the only recognised striker although Raheem Sterling often plays in a forward role with Manchester City.

Hodgson, though, hinted he is keen to link up Kane and Everton’s attacking midfielder Ross Barkley.

“It’ll be good for me to see how various combinations are developing,” said Hodgson.

“At the front we’ve got Wayne and Jamie Vardy, we’ve got Harry Kane and Ross Barkley, there’s combinations there that interest me.”

As for the rest of his line-up, and the identity of the captain in Rooney’s absence, Hodgson was keeping his cards close to his chest.

“All I’m saying is what I’ve said about the team and the starting line-up,” he said.

“The rest of the team I prefer to keep to myself and you’ll have to wait until tomorrow to see who plays and which of the players will captain the team in Wayne’s absence.”

Hodgson has been happy with the players’ attitudes during the five-day training camp in Spain, insisting the conditions will stand them in good stead for next year’s European Championship.

He said: “It starts the players thinking and feeling about what it’s going to be like next summer, we’re outside of a normal environment in England and we’re preparing in a hotel away from home in good weather which has been very useful for us.

“I think the idea and the chance that we had to come here for a few days to prepare for this game before going back England for the second game has been very, very useful.

“I’m really pleased with the way the players have applied themselves with the energy and enthusiasm they’ve shown and I know they’re very, very keen to show what they can do tomorrow night.”

Rooney admitted England are in for a tough match tomorrow but is confident they can secure a result.

He said: “It’s obviously a tough game for us, a big test against Spain, so it’s a game we’re looking forward to and we know we’ve got the quality in the squad to give Spain a good game.

“It’s an important game in terms of preparation and hopefully we can get a result out of it.”