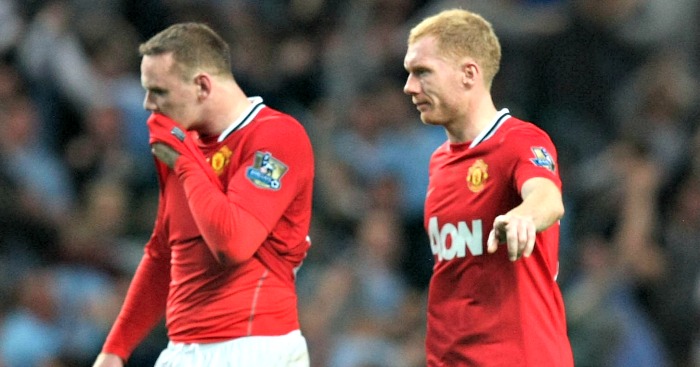 Wayne Rooney will use Paul Scholes as his role model as a permanent move into a deeper role now looks a certainty for the Manchester United captain.

The 30-year-old has been deployed in midfield in the past, but has always insisted he prefers to play as the out-and-out striker he was when he first burst on to the scene as a teenager.

But he returned to that deep-lying, quarterback role in United’s last-gasp FA Cup semi-final success against his boyhood club Everton on Saturday.

He was one of the best players on display at Wembley, picking out passes and starting attacks, while also undertaking the defensive side of the game, including clearing a Romelu Lukaku effort off the line in the early stages.

United, who are still uncertain of a top-four finish and with manager Louis van Gaal’s future the subject of speculation, now face a May 21 FA Cup final date with Crystal Palace.

Rooney is likely to remain in his new role given the form of United’s young attacking talents Anthony Martial, Marcus Rashford and Jesse Lingard.

And the England skipper is now ready to use the experience of playing alongside Scholes for so many years as a way of improving in the position.

“I’ve known for a few years, I have played there a few times throughout my career and I can play that position,” Rooney replied when asked if he was at home in midfield.

“I have played and watched Paul Scholes play that role for years and I always knew that one day that is where I would play, so I have tried to learn and watch what he did.

“It is still early days, but hopefully if I keep playing there I can develop and get better.

“We have got a lot of pace in the team now and I think I can read the game quite well – whether to go forward or stay deeper and leave the space for the other lads.

“Obviously it is down to the manager, it is his decision and for the team more importantly it is the right thing to do at this moment in time.”

Rooney may have a new post on the pitch, but he will continue to be a mentor to those precocious young talents who are looking to lead a new era at Old Trafford.

Martial arrived last summer for a huge fee, but has enjoyed a successful first campaign and scored the stoppage-time winner on Saturday, while Rashford has enhanced his reputation with a number of key goals.

Rooney, who moved to United from Everton as a 19-year-old, is ready to offer his guidance – much like current assistant manager Ryan Giggs did for him in 2004.

“Of course I try and help them,” he said.

“We’re all trying to win together. When I joined the club at 18 Giggsy was about 30 and I saw the help and advice he gave me at that age, so if I can help those young players in any way now I’m happy to do that.

“I’ve been doing that, but not only that, they can help me as well. You’re always learning and especially in the last few games learning about a new position and playing deeper than I’ve played. I’ve been enjoying it.

“Obviously it’s early days, especially for Rashford. He’s a young lad and hasn’t played many games, but the impact he has had has been huge for us in the last couple of months.

“Anthony has settled in quickly. Obviously with the start he had he wasn’t going to go on like that for the whole season, but he’s settled down, is coming up with some big goals for us and you can see the enjoyment in his game and a great goal has put us in the final.”