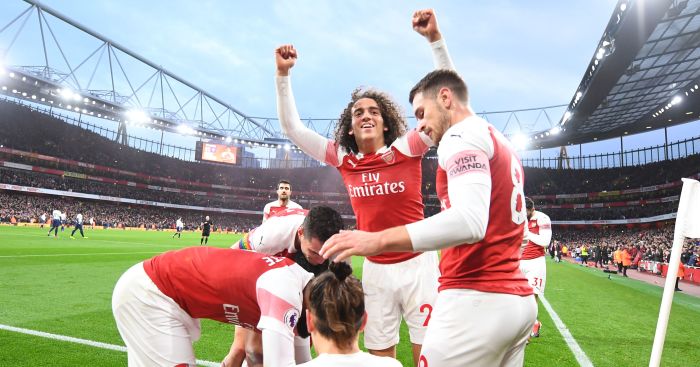 Danny Rose seemed to dig out Matteo Guendouzi following his over-the-top celebrations after the first north London derby of the season earlier this month.

Guendouzi, who has made nine Premier League starts for the Gunners, was seen fist pumping out the side of a car after the 4-2 victory over Spurs on December 2.

The Frenchman was not the only player to celebrate their victory with Pierre-Emerick Aubameyang, Aaron Ramsey and Sead Kolasinac only a few of the stars that enjoyed the victory with posts on social media.

Since then, the Gunners have had their 22-match unbeaten run ended by Southampton, while they have dropped below Tottenham and out of the top four.

Not only that, but they lost the second north London derby of the season on Wednesday evening as Spurs won 2-0 to knock them out of the League Cup.

And in the aftermath of the latest affair, Rose commented that the victory was “karma” for their celebrations in the last fixture and, although he didn’t name Guendouzi, he hinted that he got carried away in particular.

“We were fully relishing the opportunity,” Rose told the Evening Standard.

“Our only motivation was remembering the nonsense that Arsenal posted after the game a few weeks ago. That was our motivation. Players that have only played 10 games for Arsenal were getting ahead of themselves. We used that in a positive way. It’s karma. They fully deserve what they got.

“We had the motivation of getting to the semi-final, so we’re over the moon. But the cherry on top was silencing them after remembering how they celebrated like they had won the league. We’ve put that result right. We’ll see where they are come the end of the season and we’ll see where we are.”