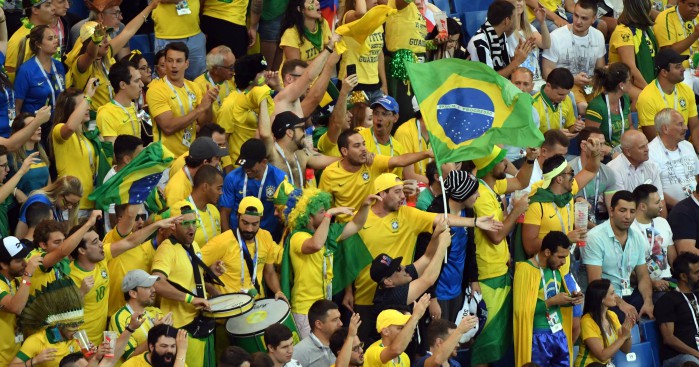 When the World Cup comes around, we are increasingly told that some of the magic has gone, that we all know too much these days; there are no surprises, no stars that come from nowhere, because we’ve heard of everyone. Or if we haven’t heard of someone, there will be a blog knocking around which allows us to at least blag our way through.

Given that we also know international football is no longer the highest level of the game, we need some magic from somewhere. The appeal of the World Cup can’t just be the constant football, because we have very similar volumes of games most weekends.

We need something else, so one of the things we can turn to is stories. Folk tales, of dynasties passed down through the years. And there’s no better folk tale in the World Cup than Brazil.

The constant fear for someone who writes about football is that you lose ‘the fan’ inside you, that it becomes a mere job and something to be jaded and cynical about. It was a relief then, when someone asked if I would like to cover Brazil v Switzerland, I managed to keep a lid on that giddy, childlike excitement for just long enough to say ‘yes’.

This is incredibly cool & I am v lucky. Hope I never get blasé or jaded about this job. pic.twitter.com/Q798hkPN4t

But why? Why do Brazil still have that affect? Why do they still reduce the most grizzled fan to sentimental mush?

The most common answer would probably be to use the over-romanticised cliche of them as the ultimate representation of carefree expression, skill and beautiful football.

You don’t really need to scratch that far under the surface to know that while Brazil has produced some of the most phenomenal talents the game has ever seen who have enriched our lives greatly, they’ve also churned out plenty of dross, and more often than not play football like many other nations.

That said, on an aesthetic level they manage to keep their appeal because even in the worst Brazil teams there’s usually one thrilling talent, one creative attacker who is able to ignore any mediocrity surrounding him and produce otherwordly football.

Beyond that, you could cite their heritage at the World Cups, not just the five times they’ve won the thing but the number of astonishing and era-defining performances, both individual and team. You could even point to the kit, colours that haven’t changed since they were introduced as a sort of soul-cleanser after 1950.

But my favourite explanation is that football just seems to mean more to Brazil than any other country. We all think we care, but the chances are we don’t care as much as Brazilians. And we latch onto that combination of the game meaning absolutely everything, as well as being really good at it, and wish we had that too.

Their performance against Switzerland will not rank among their classics, a little wasteful and frustrated by obvious opposition tactics. But complaining about a below-par match when you’re watching the Brazil at the World Cup feels a bit like whinging that it’s a bit cloudy when you go to the Grand Canyon.

There’s still a thrill when you see those shirts zipping all over the place, pinging the ball here and there, the awareness that you’re witnessing the latest iteration of maybe sport’s greatest institution. Neymar, Coutinho, Gabriel Jesus: these will be names we look back on in years to come all misty-eyed and sentimental, and they’re playing right there in front of us.

I could not, in all good conscience, recommend Rostov as, say, a honeymoon destination. Admittedly this is on the insufficient basis of less than 24 hours there, but other than the area around the Rostov Arena and a couple of pleasant parks (one of which, of course, was completely taken over by the FIFA Fan Fest)…well, let’s just say there doesn’t seem to be an awful lot there.

None of that really matters though. Rostov was the place I first saw Brazil play at the World Cup. If my visa gets revoked tomorrow and I’m on the next plane to Heathrow, it will have been worth the trip.