Home Competitions Championship Rotherham United Can Rotherham be more than a yo-yo club? 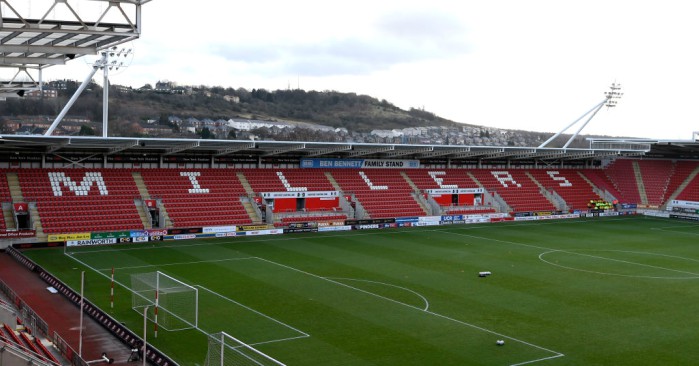 If ever there was a football club who lived and died by the age-old adage that ‘to feel the highs, you must first experience the lows’, then it is League One table-toppers Rotherham United.

Another last-minute weekend winner at Accrington Stanley’s Crown Ground cemented the Millers’ standing at the top of the table and further improved the South Yorkshire side’s potential to make an immediate return to the Championship.

Indeed, promotion should come as no surprise to anyone who has followed Paul Warne’s side over the past decade. The current manager has been at the club in some capacity through three promotions, two relegations – including last season’s drop from the second tier – and barely a dull moment nor season in between since Rotherham returned from their Sheffield exile at the Don Valley Stadium.

Now, as the Millers gear up to once more trade places with near-neighbours – both geographically and in the footballing fates – Barnsley, it will be hoped by all at the New York Stadium that another year in the Championship will be more than a brief sojourn, with two fingers raised to the notion that Rotherham are forever destined to be a yo-yo club. But is it possible?

First, we must first examine why the Yorkshiremen are seemingly too good for the third tier, yet unable to sustain themselves a level above. It is now nearly a decade since Rotherham had what could be described as a mid-table season, when they finished tenth in League Two in their final season at the Don Valley.

The bright lights of New York have brought with them successive promotions, four years of Championship struggle over two separate spells and two magical League One play-off successes.

So it comes as little surprise that the Millers – after a relatively slow start – have made their way to the top of the league, a position they can cement by defeating closest challengers Coventry City on Tuesday night.

📹 | “Absolute pandemonium from the 1,600 travelling Millers!”

Ben Wiles’ late winner sparked euphoric scenes in the away end at the Wham Stadium. What an afternoon in Lancashire👌@EricTwiggFoods.#rufc | #ForeverTogetherForeverProud pic.twitter.com/iFCnyI9nke

Three points against former boss Mark Robins will see even the most pessimistic of Rotherham supporters dreaming of Championship football once more, perhaps even this time without the lottery of an Alex Revell Wembley wonder goal or magic-hatted double from Richard Wood at Wembley.

The last time they ‘graced’ the second flight, manager Warne was in just his second full season as a manager and his first at that level besides the second half of the 2016/17 season which saw Rotherham break a plethora of awful records.

The effort to stay up was commendable at worst and blistering at best, but it shocked nobody that the Millers didn’t have what it takes to push on past the bottom three. To put it down to having one of the smallest budgets the division has seen in years is not enough; Preston North End too have few bucks with which to play, yet have played their way to consistent play-off pushes despite a relative ‘posse of nobodies’.

The marginal gains made by Warne’s approach to good human beings before great footballers has seen the club transformed on and off the pitch, and such an approach is only getting stronger with the winning culture ingrained in S60.

Big game for Rotherham United tomorrow against Coventry (1st vs 2nd). Here’s Paul Warne on the culture that has put #RUFC in position to make an immediate return to the Championship… @BBCLookNorth pic.twitter.com/fgZYe9rJzx

Fans are following suit to the point that a club long disliked by many neutrals owing to the town’s perception in the national media and their history of having perennial pantomime villain Steve Evans at the helm for over three years, is now revered in national outlets and on social media for the support shown to good causes. For example, the majority of Saturday’s 1500 travelling fans stopped off at Bury’s Gigg Lane to provide a boost to businesses struggling without the Shakers’ match days to bring in their usual income.

In Rotherham, success has largely come hand in hand with failure, but the club is now truly united for the first time in a long time.

A squad built on togetherness has suffered ridiculous volumes of heartache and mourning this season, with manager Warne losing his father to a long-term illness, midfielder Matt Crooks’ best friend and fellow footballer Jordan Sinnott being killed and defender Adam Thompson’s dad passing away at 57 shortly before the Accrington match, while assistant Richie Barker’s brother Chris took his own life during the festive period.

Such tough times can easily divide a team, yet each tragedy provides a glimmer of hope, a ray of light. Thompson was visibly moved on the bench during the 57th-minute applause from the travelling Millers mass while the rousing reception for Barker in his first match back in the dugout following his brother’s passing concluded in the “only time I’ve seen him cry”, according to Warne.

Their unity is remarkable, but do they have the quality to sustain Championship football? Especially as last season’s stand-out player Semi Ajayi is now excelling at West Brom, while midfield general Will Vaulks has slowly become a key figure at Cardiff City.

This time around, it feels like every member of a younger team could go on to play at a higher level in the almost immediate future. Centre-back Michael Ihiekwe, fellow defender Matthew Olosunde and young winger Chiedozie Ogbene are all capable of playing a division above already, while midfielder Ben Wiles is a Premier League star in the making, underlining his worth as a deputy left-back in recent weeks.

Such is the quality and consistency of this side with nine wins in their last dozen games that top scorer Freddie Ladapo is struggling for starts despite hitting 15 goals across the season so far. This is not a long-ball side reminiscent of Rotherham from yesteryear, despite the giant presence of Michael Smith up front. In Newcastle United loanee Dan Barlaser, they have one of the most creative and accurate passers in the league; he is not just ‘lumping it long to the big man’.

As for Warne, he is becoming more than just a good man-manager, a motivator, a team player capable of putting together a group of good human beings. As his experience grows, so too does his tactical nous. The 4-3-3 employed at the start of the season made way for a more traditional 4-4-2, while substitutes Ladapo and Wiles scored the all-important goals on Saturday.

A yo-yo club they may have been, but Rotherham now have the makings of a side who can push on further than they ever have before. Life has rarely been dull for the Millers, but they might now be able to embrace the relative contentment of a mid-table place in the Championship.