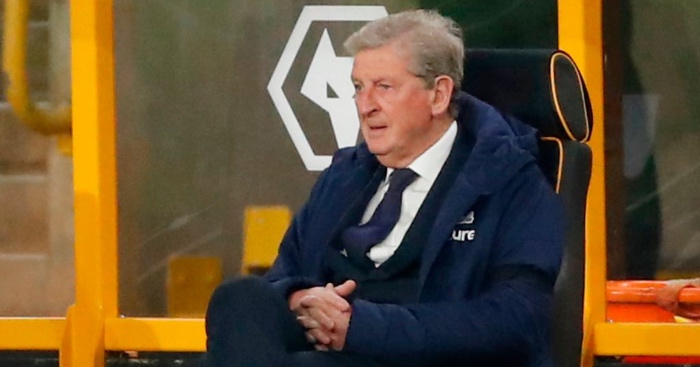 Crystal Palace manager Roy Hodgson believes Luka Milivojevic’s tackle was a ‘fair challenge’ and ‘not a sending off’ after his side lost to Wolves.

Wolves took the lead early on thanks to a goal from Rayan Ait-Nouri. They struck again 11 minutes later thanks Daniel Podence.

Palace struggled to get into the game and were lucky not to go three nil down. Wolves midfielder Leander Dendoncker hit a strike against the bar from well outside the box.

In the second half, Palace went down to ten men as club captain Milivojevic was sent off. The player’s challenge on Joao Moutinho was ruled as dangerous.

Speaking after the match, Hodgson said: “Wolves started very well, we know what quality they have. The first 20 minutes was a very good spell for them and made life difficult for us.

“I thought we overcame it and thought the longer the game went on the stronger we became.

“My view is it’s not a sending off and I’ve told [referee] Martin Atkinson that. He thinks there was a reason to give a red card but I’ve seen it as well and I certainly don’t agree with that.

“It was a fair challenge and there was no intent to contact Joao Moutinho at all.

“I’m very disappointed with that one. It’s the worst part of the evening in a way. There would have been positives to take, but to lose a player for three games for a challenge I didn’t even consider a foul will be very hard to take.”

Milivojevic caught Moutinho on the ankle with his studs raised. Atkinson consulted the VAR screen and came back to send the player off.

It was a challenge that looked a lot worse as it was slowed down on the screen.

Palace will now have to play their next few games without their captain.

Their next match is at home to Leeds on Saturday 7th November.