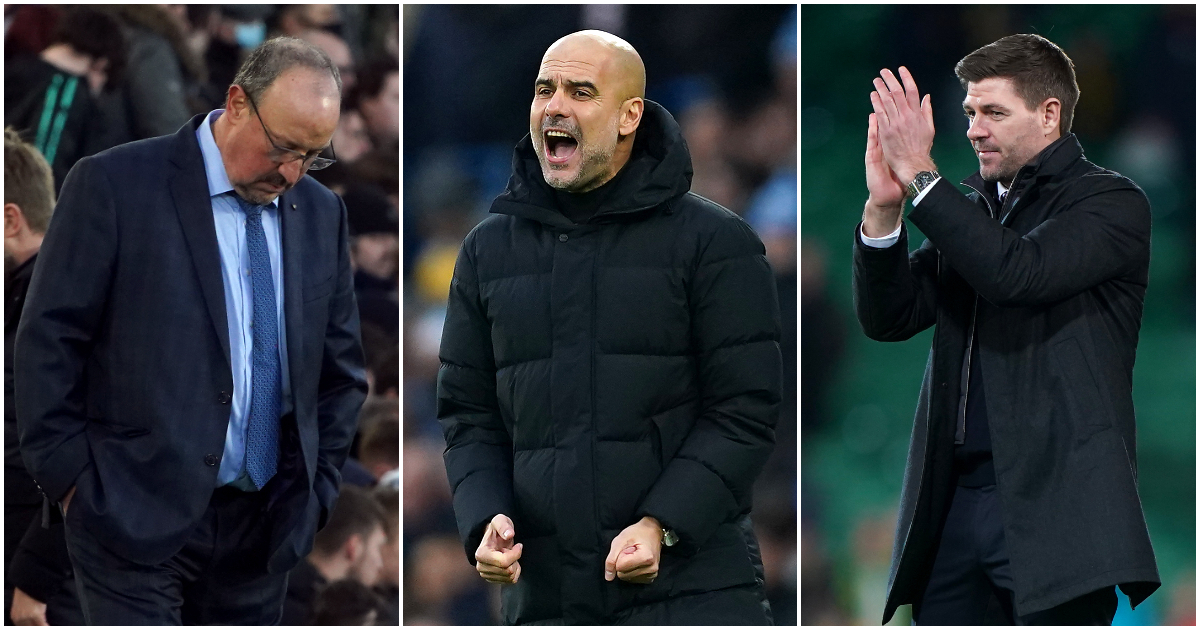 The next 12 months will test the blood pressure of the men on the touchline and the patience of the boardroom. Time will wait for some men and not others, so here’s a health check on each of the 20 Premier League managers as we start a new year…

20) Claudio Ranieri
What is the Claudio Ranieri effect? At Craven Cottage, he started okay but when the losses piled up it was terminal. Bar the Manchester United and Everton monsterings, there has been nothing of substance since that rather unlucky defeat to Chelsea at home. Six straight defeats and a couple of postponements have deflated any bounce. If results don’t come very soon, this will be another shotgun Watford marriage that ends in a quickie divorce.

19) Rafa Benitez
Benitez’s Toffees have shown signs of life in key games – with draws against Manchester United and Chelsea – but they will happily consign this half of the season to the delete basket. In his first year at Liverpool, Benitez lost 14 games in the Premier League and this is heading for worse. From meagre rations at Goodison Park, you cannot make a “small cloob” big again. The 61-year-old declared: “I have massive confidence in the team for the second half of the season.” There’s no doubt that a glut of first-team returns from Dominic Calvert-Lewin, Richarlison and Abdoulaye Doucoure will stiffen resolve through the torrid times to come but it’s hard to escape the mounting evidence that suggests this is just a bad fit between manager and club.

18) Ralph Hasenhuttl
Wreck-it Ralph had a run-in with the referee last Wednesday and received a yellow for his troubles, His team subsequently conceded the lead and the initiative against Tottenham but somehow held on. His Southampton team must drive him into a weird frenzy given their propensity to not win football matches. Even when they do, they try desperately hard not to. No other Premier League side has dropped as many points (73!) from winning positions since Hasenhuttl took charge three years ago. It needs to improve.

17) Sean Dyche
Come rain, shine, snow or blizzard Dyche is there in a shirt. It’s do as I do but not so much do as I say these days. The Burnley effect has become muted over time. Those three goals conceded to Manchester United were as soft as a cuddly toy and now they are in a dogfight. When the temperature drops from this January heatwave and Blue Monday hits, Dyche will hope that the Clarets are in their element. We think they will finally go down.

16) Marcelo Bielsa
Once upon a time, Leeds were wonderful to watch. Their grand return to the Premier League was a 4-3 defeat at Anfield which showcased a boom and bust style to salivate for. Their last defeat against Arsenal was a horror film brought on by a biblical list of injured bodies. It wasn’t right because it wasn’t Leeds. Their men of action are inactive and the drop-off is enormous. Despite all of this, Marcelo Bielsa has given himself a negative review: “The evaluation of my task in the last few months is ‘negative’. The situations we’ve had to go through, I wasn’t able to resolve them as I would like.” The comeback started against Burnley. It must go on, for all our sakes. Still feels like Leeds’ struggles are more likely see Bielsa walk than be sacked, but either would be a bad outcome for the league.

15) Dean Smith
Deano is the kind of chap that needs to be on the touchline, in the dressing rooms and on the football pitch. What else to do? There’s no time to waste. A week after getting the boot at Villa, he was jumping into the hot seat at Carrow Road. He mused: “From the age of 16 I’ve been working in football. I think in that time I’ve had four months out and didn’t enjoy it.” January will need to see the start of four months of real improvement otherwise Norwich won’t enjoy it either.

14) Ralf Rangnick
He came He saw. He observed. He didn’t like it. United’s last three matches against Norwich, Newcastle and Wolves have shown what levels the German is currently working with. It is about physicality and energy. Newcastle wanted it more. Even Norwich. And definitely Wolves. Ronaldo can do one with his frustrated tackle syndrome. Bruno Fernandes is on a constant moan loop. Rangnick has to bring together the upper-class mavericks and the rest to fight as a unit. It’s going to be interesting.

13) Steven Gerrard
Is Steven Gerrard’s glass half-full or half-empty? He’s got four league wins out of eight, but three of those losses have come against the big three that are the benchmark for his future credentials. Gerrard has taken to Premier League management comfortably enough, even replicating the 2014 time-wasting Jose Mourinho tactics at Anfield earlier last month. As he comes out of his Covid wrapping, the gloves are off. Villa were too easy to beat at Brentford. Expect some toughening up this year. Cheer up, Steven. It might never happen.

12) Patrick Vieira
The Frenchman has made his presence felt at Selhurst Park from shifting training times to reducing social media usage. However, the result isn’t uptight and boring. Far from it. Those one-percenters can all add up and the eyesore of suppressed aggression under Roy Hodgson is now giving way to a more fluid attack. Risk and reward is the way forward. A little bit of game management wouldn’t go amiss but the future isn’t monotone anymore. We want more of Michael Olise.

11) Eddie Howe
The script is that Eddie, young managerial buck, will take this team, shake this team and make them into a coherent unit with a soundtrack of St James’s Park. Against United, and to a lesser extent Liverpool, there were signs that the Toon had finally stoked themselves for the fight. But the mortal wounds keep coming, and the leads (and fixtures) keep disappearing. Howe is forging a team. He doesn’t need to forge banknotes. Look out for the January sales.

10) Brendan Rodgers
Leicester have been a strange beast this term. Despite the buzz of the FA Cup win, the follow-up to being “almost fourth” (again) has been a rather damp squib. They are in the nothing zone in the table, always an injury or two away from being laid out on the canvas. Then, they suddenly rise from said canvas with a makeshift band of brothers against Liverpool. Rodgers also did his usual fail in Europe (he doesn’t know what the Conference League is) but you can only get sniffy if you achieve things. Mid-table won’t cut it.

9) Thomas Frank
The Dane has been a breath of fresh air in the Premier League. Immediately knocking over an insipid Arsenal was the start that we wanted to see from Fulham at the same stage last year, but 12 months later Brentford did the business. Liverpool were rocked and rattled in a 3-3 draw at Griffin Park. The down slide has been partially explained by the loss of their outstanding goalkeeper and a reaction to the demands of the League. However, Brentford are not Fulham. They are in this together as they proved against Manchester City. Frank will have many good nights and afternoons to come.

8) Graham Potter
Brighton played Liverpool off the park in large parts of their match at Anfield and, yet, were almost 3-0 down before threatening to win in a 2-2 draw. They are capable. Very capable. They often rely on last-gasp interventions and have essentially become the draw masters. Potter has the plaudits his coaching often deserves. He just needs a few more points on the board. The Everton win is a good start down a long home straight.

7) Mikel Arteta
Arteta is stamping his authority on the club by dealing transparently and decisively with domestics. However, he can’t quite pull it off against the big boys. He was so close (from a safe distance) against City, but the team’s temperature gauge runs too hot. Self-destructive habits and throwing toys out of the pram won’t advance the cause. If they really want to regain Arsene Wenger’s annual downgrade of fourth, Arsenal must beat up some of these prefects when they have the chance.

6) David Moyes
After that heady win over Liverpool in November, David Moyes said: “We can challenge the top four but whoever they are I want to see if we can give us an opportunity, we missed out on Champions League football by two points so why can we not be there?” The follow-up – bar another 3-2 ripper over Chelsea – has been a bit “meh” although the general curve is still one of positivity. Moyes needs to be bolder – and to be backed – to get to the next stage.

5) Bruno Lage
After a wobbly start to the post-Nuno era, the Portuguese has found a way of galvanising his troops. Some people don’t like it, namely Pep Guardiola. Bruno doesn’t give a damn: “It is his opinion. I don’t feel nothing. I don’t care. I never talk about the way the other team plays.” Wolves are holding up well around that seventh spot they loved so much at their very best. It’s just the goals for column is only better than Norwich. There’s been much to admire in their backs to wall efforts against City and Liverpool, but unlocking up front would make it more wholesome.

4) Antonio Conte
Anyone who can make Dele Alli eat grass deserves a medal. Conte’s infamous work ethic is beginning to take shape and if you are not all in for double sessions then there’s the exit. That thrilling 2-2 draw with Liverpool was a throwback to the….thrilling 2-2 draw with Liverpool from Pochettino’s reign. Tottenham need to be relevant again and Conte must make those games in hand count. He has shown his Mourinhoesque side by claiming the team are “too emotional”. At least they are now showing personality, stripping off the leaden Nuno lemming skins of yore.

3) Thomas Tuchel
Tuchel is not the most laughingest man in the world but he did manage a grin after the mental 2-2 draw against Liverpool. Chelsea’s miserly run since Sean Dyche “stole” a point at Stamford Bridge has irked the German as well as missed chances, injuries in the squad, a whole wad of Covid cases and a moaning, perhaps want away, striker. That gargantuan team spirit that drove them earlier in the season has now dissipated. For now, it’s beginning to look a lot like Chelsea.

2) Jurgen Klopp
Klopp is/was the smiley happy person that brought Xmas gifts to all in 2020 before Covid stretched his patience and flatlined his grin. Last week was the first time in five years that Liverpool have lost during the December period. Of course, this is where it all started going wrong for the Reds last season when they drew against West Brom in late December 2021 and self-combusted thereafter. Will it be another dark January without their AFCON-bound trio? A trip to Wembley to arrest Liverpool’s lack of recent domestic Cup success is overdue as City fly off the League map.

1) Pep Guardiola
City won over 50 games in all competitions in 2021, although they lost the most important one in Porto. Nevertheless, Guardiola couldn’t suppress a half-smile when asked about the current state of the title race, mumbling about the others not dropping points. They are. City have reeled off 11 straight wins and 32 goals without much of a sweat. They can even offload Ferran Torres. Is it all over? Probably. The intrigue will be in February when attention turns to Pep’s most pressurised subject: the Champions League.