Home All The News Russia 1-2 Slovakia: The Weiss guys 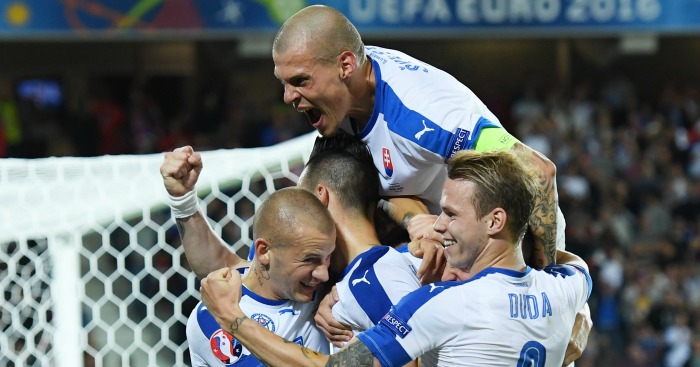 Slovakia claimed a 2-1 win against Russia to revive their hopes of reaching the Euro 2016 knock-out stages and leave their opponents on the brink of elimination.

First-half goals from Vladimir Weiss and Marek Hamsik at Lille’s Stade Pierre-Mauroy proved enough to secure a deserved three points that moved them second in Group B – behind Wales on goal difference.

To stand any chance of progressing, Russia must beat Wales on Monday and hope other results – including between England and Wales on Thursday – work to their advantage.

Russia’s lack of quality and confidence was evident for much of Tuesday’s game.

They had been fortunate Vasili Beretzuski’s late equalising goal gave them a 1-1 draw against England on Saturday, when their opponents had created enough chances to earn a convincing victory, and they again proved limited.

Slovakia’s Weiss scored the opening goal in the 32nd minute, running onto Hamsik’s impressive pass from inside his own half and controlling well inside Russia’s area.

He then cut inside on his right foot to create space away from Russia’s pedestrian defence, before calmly curling the ball into the bottom-right corner beyond goalkeeper Igor Akinfeev.

Hamsik, long recognised as Slovakia’s most important player, then doubled their lead in the 45th minute with one of the finest goals of the tournament so far.

Collecting Weiss’ short corner on the edge of the area, he masterfully curled the ball across a crowded penalty area and into the top-right corner.

He introduced Denis Glushakov for Roman Neustadter and Pavel Mamaev for Aleksandr Golovin in pursuit of the goals they needed, but it was a defensive lapse that gave them hope.

Slovakia struggled to clear a loose ball and Oleg Shatov took advantage to curl a cross from the left towards Glushakov, from where he comfortably headed from the centre of the area beyond goalkeeper Matus Kozacik in the 80th minute.

A flare was then lit that appeared to be among the Russian supporters in the crowd, just a day after UEFA ruled they will be disqualified from the competition if there is a repeat of the crowd trouble seen during their fixture with England.

Russia continued to pursue a second goal but, amid growing pressure, Slovakia held out for an important win.