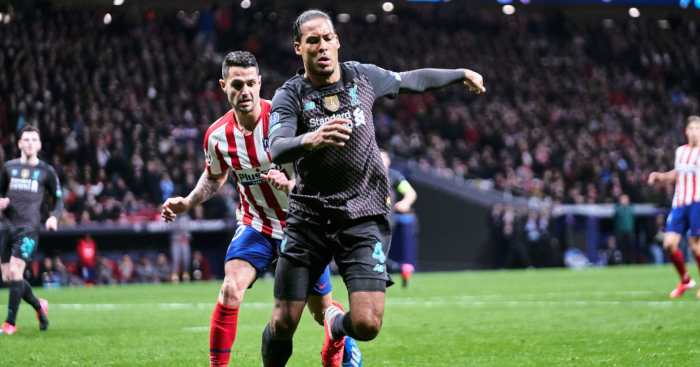 Ruud Gullit thinks Virgil van Dijk had a “nightmare” after holders Liverpool were beaten in the first leg of their Champions League tie against Atletico Madrid.

The holders will need to overturn a 1-0 aggregate deficit when the sides meet at Anfield next month to reach the quarter-finals after Saul Niguez scored the only goal at the Wanda Metropolitano Stadium.

Niguez struck after just four minutes and Atletico then sat back, much to Liverpool‘s irritation, to preserve their advantage in what was a dour contest slowed by the home side’s frequent time-wasting and play-acting.

MAILS: Liverpool’s kryptonite is a world-class manager with a plan…

Van Dijk has been a standout player for Liverpool over the last couple of seasons but Gullit criticised him for an uncharacteristically poor display against Atletico.

“Van Dijk has had a nightmare today,” Gullit told beIN SPORTS. “I saw him doing things, especially the first ball how he gives away the corner, clumsy a little bit, not necessary to do that.

On the match, Gullit added: “They know at Anfield they score a lot of goals, they know that, but they are going to face another game like this and they need to be better, higher tempo, quicker play, anything.”

Gullit’s fellow pundit Marcel Desailly said: “You cannot count on your stadium and your ability at home every time to make a difference. It is Champions League, they have made one mistake, they’ve paid straight away and they score.

“Going forward you also open up to Atletico who will potentially have the opportunity to score.”