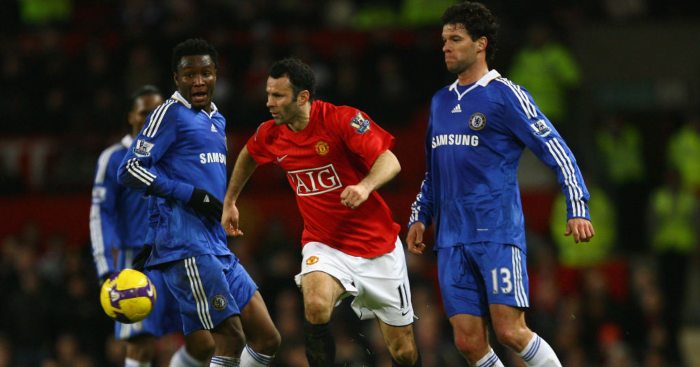 Man Utd legend Ryan Giggs has explained how Sir Alex Ferguson once pulled him “three weeks” before a match against Chelsea to tell him to give Michael Ballack “nightmares”.

The legendary manager – who was in charge at Old Trafford for 27 years –  told him to “forget about” their other fixtures in between and concentrate on his plan to terrorise Ballack.

Ferguson told Giggs that the former Chelsea man “doesn’t like players running at him” and urged him to get himself “right” for the fixture.

MEDIAWATCH: Man United: Now for title with best midfield since 2008

“The majority of the time he could trust us to play a role,” former Man Utd winger Giggs told The Greatest Game with Jamie Carragher.

“I go back, played midfield at Old Trafford against Chelsea. He pulled me like three weeks before the game. He said, ‘We’re playing Chelsea, I want you to play in midfield against Michael Ballack. He doesn’t like players running at him, you’ll give him nightmares’.

“I think it was the quarter-finals of the Champions League. I’d been in and out of the team at the time. Three weeks away, there’s like five games in between. I said, ‘What about the other games in between?’

“He says: ‘Forget about them. Just get yourself ready for Chelsea’. It was that sort of thing. Okay, you’d be subbed, be in and out of the team but get yourself right for that.”