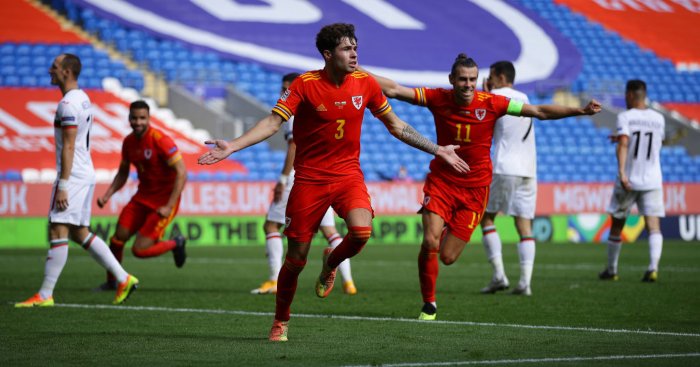 Ryan Giggs hailed the impact of Neco Williams after the Liverpool teenager scored his first senior goal to maintain Wales’ 100 per cent record in the Nations League.

Williams, winning his second cap as a 65th-minute substitute, headed home Jonny Williams’ 94th-minute cross at the end of a stunning 23-pass move to give Wales a 1-0 win over Bulgaria in Cardiff.

“Neco’s attitude is first-class, when you have a professional who wants to improve then you’ve got a chance,” Wales manager Giggs said after the 19-year-old Liverpool full-back had secured Sunday’s last-gasp win.

“He’s had a fantastic week. He’s just made his debut three days ago and then scored the winning goal.

“He’s been brilliant all week, not only in the games but in training as well. He’s brought a good energy and lots of quality.”

WHAT A FEELING!!! Buzzing to have scored the winner on my home debut for my country 🏴󠁧󠁢󠁷󠁬󠁳󠁿🤩 doing my family proud. Gutted the fans weren’t there to be in the moment. @FAWales #getinneco pic.twitter.com/lwDZonXdR4

Wales had also struck late in Finland three days earlier to start their 2020/21 Nations League campaign with a win.

Giggs’ side are now three points clear of Finland – 1-0 winners against the Republic of Ireland in Dublin on Sunday – at the top of League B, Group 4.

Wales have won four successive games either side of the hiatus in international football because of the coronavirus pandemic and are seven unbeaten.

“It’s a good trait to have, we keep going,” said Giggs, when reminded that he played in Manchester United teams who had a knack of scoring late goals in what was christened ‘Fergie Time’.

“It wasn’t the flowing football we’ve produced in the past. I think that’s to do with the time of the season and the fitness and sharpness of the players.

“The two teams we’ve played are a month into the new season.

“I thought that played a part, and we started sluggish. We looked flat.

What a moment for Neco Williams! 🔥🏴󠁧󠁢󠁷󠁬󠁳󠁿

The #LFC right-back grabs a late, late winner on his home debut for @Cymru as they make it 2 wins from 2 in the UEFA Nations League! ✅💯

“The second half was much better, although we didn’t create a lot of chances.

“We’ve had some good clean sheets, and when you have clean sheets it always gives you a chance to produce the wins.”

Wales face a Nations League double-header on the road in October with trips to the Republic of Ireland and Bulgaria.

But before that the Dragons have a friendly date with England at Wembley on October 8.

“England have shown what a quality team they are with strength in depth,” Giggs said.

“But we’re getting there as well with the strength in depth and we go into every game thinking we’ve got a chance.”