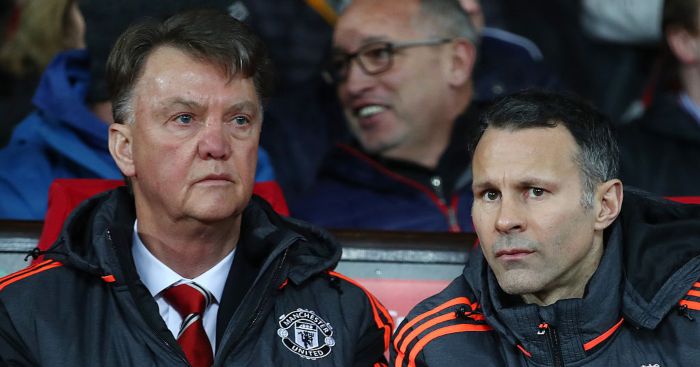 Ryan Giggs has revealed that Louis van Gaal “punched” him in the stomach during his first meeting with the former Man Utd manager.

However, other players such as Rafael were not so keen on the Dutchman and Giggs – who was Van Gaal’s assistant during his time at Man Utd – has told the story of his bizarre first encounter with the former Barcelona boss..

“He was different. He was very dominating,” Giggs said on Jamie Carragher’s Greatest Game podcast.

“The first time I met him he punched me in the stomach. I’ve gone to meet him, we’ve got a list of the players that I think were good and the ones that were not so good.

“I’ve gone to meet him at a hotel, he’s opened the door, looked at me up and down and gone ‘You are in good shape!’ then he punched me in the stomach.

“It was hard as well and I didn’t know what to do.”

Giggs added: “You could have given something back but that’s me out of a job. But that’s what he was like. He was very dominating and would be right up in your face.

“He would be a nightmare now with social distancing.

“He would be right up in your face, looking down on you and very direct. He looked after his staff and his players and he was a really good person but just very quirky.”