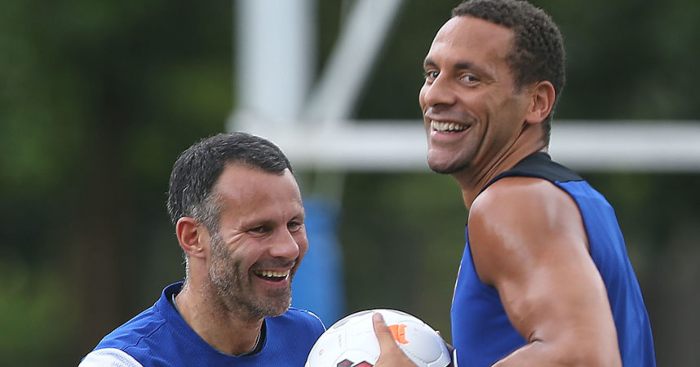 Ryan Giggs claims Rio Ferdinand was teased by his Man Utd team-mates when he first joined ‘as he was “one of the worst players in training”.

Ferdinand went on to become a Man Utd legend, winning six Premier League titles, two League Cups and a Champions League during his 12 years at the club.

When asked about the attitude required to succeed during his time at Man Utd, Giggs told beIN Sports: “I used the example of Rio Ferdinand, he was a brilliant player when he came to Man Utd.

“But all of a sudden he’s one of the worst players in training in the boxes we used to play, the little keep ball 8 vs 2 and he’s thinking wow! All of a sudden you are under pressure before training has even started because that’s part of the warm up.

“He wouldn’t get the mick taken out of him at Leeds or West Ham if he was in the middle. At United it was constant. If you are in the middle they are putting the bib on you, just keep it on, and instantly you are probably going home thinking what’s just happened there? I used to enjoy training!

“You have to step up to that next level. There is no hiding place. And he cost £30million, the most expensive defender in the world. It didn’t matter. And of course by the end of it he was the best. He was the best in the box because he was so good with his feet, he was confident so there is a bit, or was a bit, of sink or swim.”