Home All The News Sacked Redknapp: I would have challenged for promotion 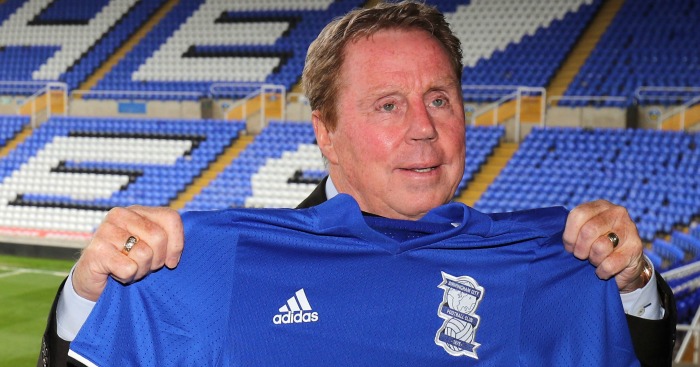 Sacked Harry Redknapp left Birmingham on Saturday night insisting he would have brought Premier League football back to the club.

The 70-year-old former Tottenham boss was brought in on a rescue mission at the end of last season and kept Blues in the Championship.

But the club have lost seven of their 10 games in all competitions this term, including their last six, following a 3-1 home defeat to Preston on Saturday.

And that reversal, a particularly unlucky 13th game in charge for Redknapp, proved to be the final straw.

A statement from City read: “Unfortunately due to the poor start to the campaign which sees the club second from bottom of the Championship, we are left with no choice but to terminate the contract of the manager with immediate effect.”

But Redknapp is adamant he would have delivered success, saying he was hamstrung by injuries and deals that did not get done during the transfer window.

That is a claim that will surprise some given Redknapp signed 14 players to the tune of £20million in the summer after agreeing to be the permanent successor to Gianfranco Zola’s disastrous reign.

He banked £250,000 for the final three games and signed a contract worth £1.75million to take charge for this term. It is unclear what the former West Ham and Portsmouth manager will get in compensation.

“I am disappointed. It’s been difficult, I have had one week with a new team and new players, one week,” he told the Birmingham Mail.

“It’s not an excuse but today I had three of the forwards missing who I would have picked, probably the three most exciting players in all honesty.

“It takes time to build a football team, not one week. I didn’t get the players in I was after in pre-season and suddenly I have got a load of players in.

“A lot of the targets I was after I couldn’t get over the line.

“And I still felt that given time I would have given them a team that would have been challenging for promotion, I had no doubt about that.”

Redknapp broke the club’s transfer record to buy forward Jota from Brentford for £6.5million while the club gave the 26-year-old a four-year deal worth £40,000-a-week.

Middlesbrough were interested but only prepared to offer half the wages while Blues paid £3.5million to Barnsley for defender Marc Roberts, well outbidding rivals who were offering significantly less.

Agent Darren Dein was heavily involved in the club’s recruitment but it is unclear what his role will be at St Andrew’s going forward, along with that of director of football Jeff Vetere.

“Maybe not this year but over the next two years I would have got promotion,” Redknapp added.

“I had to do well this year but I would have stayed because I loved it there, absolutely loved my time there.

“I am not an idiot, I am not a silly person who goes around saying things, I think I have been round long enough.”

Speaking after the game, which saw Daniel Johnson, Jordan Hugill and Tom Barkhuizen reply to Maxime Colin’s opener, Preston boss Alex Neil said: “I made the players aware at half-time that I expected more from them in the second half.

“I got the response I wanted and I could not have asked any more. We had bits of quality to finish off moves we had at the time.”

Lee Carsley will take charge of Birmingham as a caretaker with the likes of Alan Pardew and Nigel Pearson being touted as replacements.