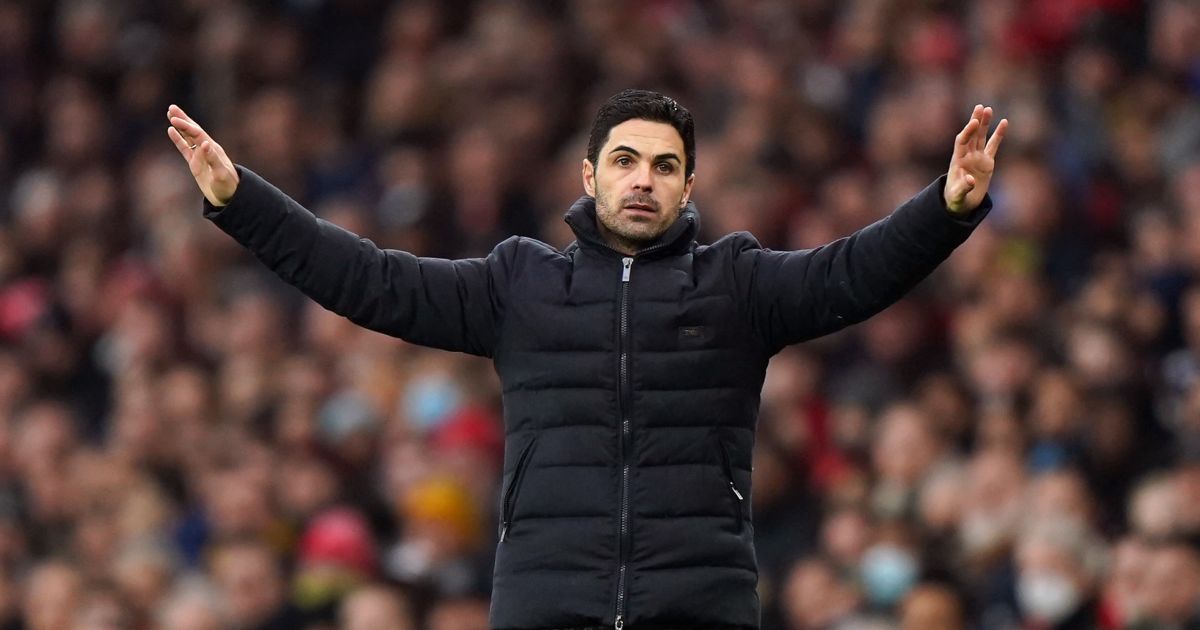 Sack Mikel Arteta because Arsenal should be winning the Premier League. Plus, Dominic Calvert-Lewin for just £15m…

Captain Obvious
You know it’s an international break when The Sun‘s back-page lead is that ‘PREM refs feel under pressure to accept VAR overturns – even if they are convinced their original decision was right’.

No sh*t. Was there a teeny-tiny clue in the fact that referees have gone to the monitor 49 times this season and agreed with VAR every single time?

One question: Would that have been a back page if the latest (erroneous) decision had not gone Liverpool’s way?

Had he started this column on New Year’s Day, we would have been treated to a version of this…

Now I’ve stopped smashing my head against the wall at the shocking injustice of that ‘loss’, I’m very proud of that Arsenal performance.
We went toe-to-toe with the best team in the world & should have won it.
I’m beginning to believe in Arteta’s process.

Mikel Arteta’s ‘trust the process’ drugs have worn off.. if Arsenal don’t get top four he should be sacked | @piersmorgan https://t.co/As9ncmPEZU

That seems entirely reasonable – as long as you ignore the fact that Arsenal began the season as sixth favourites for the title, are now in sixth, were the Premier League’s fourth-best side of 2021 and played Burnley at the weekend without a recognised right-back and without their entire first-choice central midfield, just three days after being given the run-around by Liverpool.

Mikel Arteta might not have been a roaring success but claiming his reign has been a ‘demonstrable failure’ is ludicrous. He has won a trophy, which is still important to some, and his Arsenal side are now just two points behind Manchester United in fourth place. He took over with Arsenal in tenth place and some seven points behind fourth so that is undeniable progress. But this is when you realise that Morgan does not want progress…

‘For a club like Arsenal, it’s winning the Premier League and Champions League that matters and on which real success should be judged.’

Well if that is your criteria then every single potential manager will be a failure. Every single one. Arsenal have not won the Premier League in 18 seasons and have never won the Champions League. Arteta will not win the Premier League and neither will any other Arsenal manager in the next five years. So sack him now. Sack them all now even before they are appointed to save yourselves time.

Colly wobble
Over in the Daily Mirror, ‘the man who always speaks his mind’ is getting his knickers in a twist about the £60m valuation of Dominic Calvert-Lewin. Now the first thing to note is that the valuation has reportedly been made by Everton – who can value him at whatever price they want – and it’s been described as ‘staggering’ and prohibitive to West Ham, who were the interested party.

Calvert-Lewin is Everton’s best hope of staying out of relegation trouble so it’s hardly surprising that they would set his price at a level which will put off all but the most desperate; they would not sell in January unless the price offered was too good to turn down. They may well have decided that price is £60m.

But Collymore is warming to his theme, fired by the realisation that Calvert-Lewin already has four times as many international caps as he managed in an era when ‘strikers had to score 25 goals in a season just to get in an England squad’.

‘You can be a £60m striker with a goalscoring record of one in four if a club thinks you could help them get into Europe. And I’m not knocking Calvert-Lewin but, in a sane market, the lad’s worth £15m at best.’

So much to unpick here. First, DCL is not a £60m striker. And second, he has a record of 24 goals in 43 games over the last two seasons. That’s better than one-in-two. And thirdly, you are not talking about a ‘sane market’ but a market from about 20 years ago. Nobody will pay £60m for Calvert-Lewin but £15m is a far more ridiculous suggestion.

Collymore then bemoans ‘the worst pool of centre-forwards we’ve had for a generation’ before repeating his previous claim that Harry Kane does not have ‘the X-factor’ despite him scoring 171 Premier League goals in 261 games for Tottenham. It would beggar belief were it not simple jealousy.

‘If you look at the top 25 scorers right now, there’s barely an English striker among them…and the top one, Jamie Vardy, no longer wants to play international football.’

If you look at the top 25 scorers right now, there’s barely a striker of any nationality among them – we count eight among a top 25 otherwise made up of assorted wide forwards and attacking midfielders – because, and this is going to blow some minds, football has changed over the last 30 years.

What we do see amongst those 25 top scorers are 11 Englishmen, which is one of the many reasons why we have an England team that has remained unbeaten in 90 minutes since November 2020 and has scored 30 goals in World Cup qualifying. It doesn’t matter a great deal that not many of them play as out-and-out strikers; England only actually need one of those and despite missing the X Factor, he is rather good for England.

And all of that nonsense from a story in The Sun about Everton’s reported valuation of one of their greatest assets in a month when only the desperate buy. It might have been designed to trigger Stan.

Sticky Toffee pudding
The headline on Martin Samuel’s latest in the Daily Mail: ‘If Vitor Pereira and Fabio Cannavaro are on the shortlist, Everton really ARE in a mess… what credentials do either have to prove they are the man to navigate this relegation fight?’

Phenomenal stuff from the man who wrote at length last week that Everton should appoint Wayne Rooney and keep him in charge until 2024 at least regardless of whether he leads them to relegation. If they follow that plan, they really ARE in a mess.