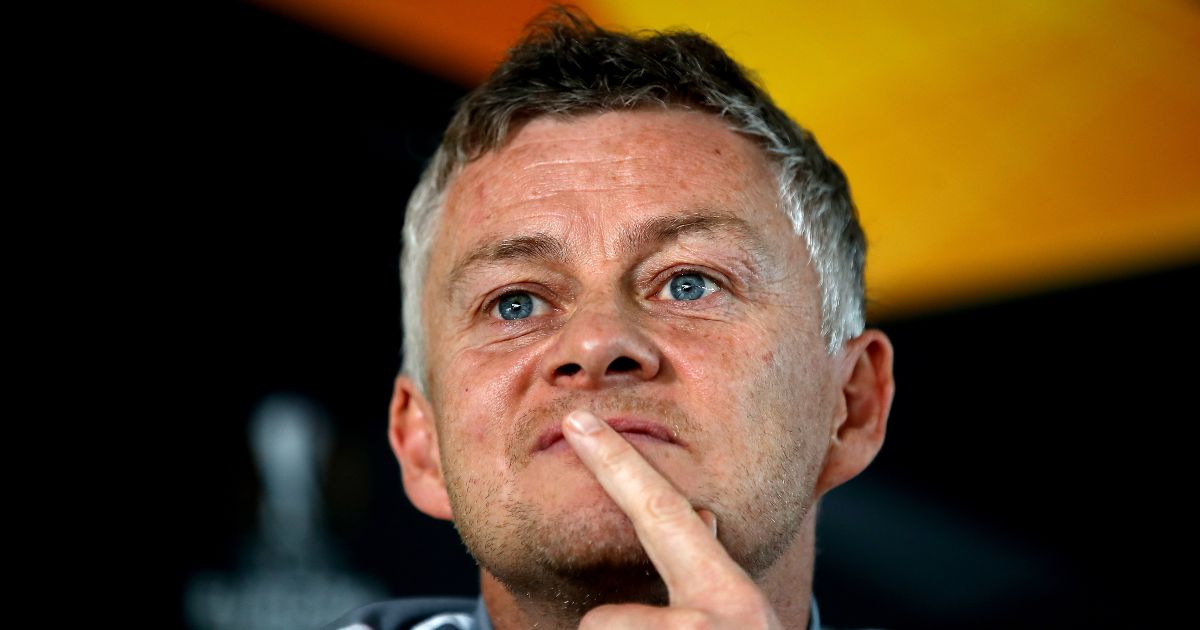 Should the focus be on the players, Ole Gunnar Solskjaer or Ed Woodward? The Mailbox discusses the Norwegian’s exit at Man Utd…

Send your thoughts on that and anything else to theeditor@football365.com…

Ole leaves the wheel of the Titanic
So Ole has gone, many weeks after he actually should have. Another piece of feckless incompetence from Ed Woodward – a man who has almost made complete failure an art form.

They’ve missed out on Conte because he was too strong willed for them, which is pathetic. Rodgers star has fallen at exactly the wrong time for him but very much the right time at United. If you think he could manage Ronaldo, Fernandes, Pogba at al – I have a four storey igloo in the Sahara to sell you.

Maguire confirmed my recent theory that anyone called Harry is a liability. His stupidity knows no bounds and his cupping of the ears to give it some looks even more idiotic now than it did at the time. A penny for Roy Keane’s thoughts.

Watford are bad, really bad. But they could have , maybe should have scored 6, even 8. This is indicative of how much the United players have downed tools , which is shocking really. They all come out on social media and in interviews expressing great distress but then play like a team of complete strangers on Prozac.

Zidane is not the answer in any way shape or form. He commands great respect as he should, being once the best player in the world. But he’s no tactical genius or man management legend. He was in the right place at the right time in Madrid. Those people arguing he could get the best out of Ronaldo are wilfully ignoring the fact that this is a different player to the one in Real. Older, more immobile, much less effective. Zidane can’t give him his youth back.

Which leaves Ten Hag. Obviously he’s a bit of a wild card but he did lead Ajax to a Champions League semi which he came incredibly close to winning and played bloody good football. Tactically obsessed,  I believe he’ll be another one in the Tuchel, Klopp mould and would be a massive get for the club at a time when you absolutely have to have a world class manager to compete. But we’ll see. Zidane has much the bigger name and that’s what Woodward will be blinded by.

It’s all slightly disappointing in the sense that it slightly takes the gloss off our 5-0 win. Should have scored 10 after all.

But completely stuffing up Arteta’s process will have to make up for it.
James, Liverpool

Hardly his fault the overpaid muppets on the pitch can’t execute the game plan.
Dave A

I missed the emergency mailbox didn’t I? Bollocks.

Hats off to Watford. United made them look better than they were, which was still very good.

I don’t mean to get too technical but, when that game started, every United player looked and played like all of their girlfriends had broken up with them 5 minutes before taking the pitch and they know they’re about to reveal to the world that they all have teeny tiny wieners.

Donny played like he just hooked up with Helen of Troy, to be fair.

In all seriousness, Ole’s finally gone and I do want to say I appreciate his calmness and restraint in front of the media for 3 years now, up to the very end. Did everyone see that post match interview? Where he was basically being prodded into admitting that he should be canned. Man that was tough to watch. Yeah he walking away with millions and all that, but on a human level so much of this sucks. Probably because starting at the top, our club isn’t very human anymore.

Onwards and Upwards. Hey Tuchel, do you remember the last time you faced us when we sacked our manager and your team was heavily favourited? Me too. 🙂
Jamin, Toronto

So it looks like we will be parting company with Ole after another awful performance, this time against potential relegation fodder. It was clear the players weren’t properly up for it, perhaps as they could see the writing on the wall, and in this league if performances drop off even slightly you’ll get punished regardless of who the opposition is.

Just to cut through the ridicule and bluster of the last couple of months, Ole can walk away with his head held high. I had hoped he would grow with the role, and this season was always make or break given everything should have been in place to challenge. But it hasn’t happened, and really he needed to win the Europa League so that he could keep players on board with his methods when things went south.

Nevertheless getting us in top 4 twice in a row, first time since Fergie left, and coming second last season is not an easy task given the quality in the league now (on and at the side of the pitch). He got us to that European final and semi finals of every cup we entered the season before. He had plenty of great results including schooling pep a number of times, demolishing PSG away twice, tanking Chelsea 4-0, putting Liverpool out of the FA cup, destroying Southampton 9-0. Then there was that unbeaten away record and an overall win rate as United manager only bettered by Sir Alex and Jose, two of the greatest managers of all time. All done with dignity, respect and class. Just not quite good enough to take us to the next level but far from a PE teacher, a moniker made up by some clueless hack somewhere who wouldn’t know where to start when it comes to managing a club of this size.

Still is, and always will be, our OLEgend.
Garey Vance, MUFC

The moment which shows Solskjaer should never have been Man Utd boss
That one moment OGS low fives Maguire as he was sent off highlights why he should never be Man Utd manager, could you imagine Sir Alex doing that? Shows players have no fear/respect for him.

Bet he had a nice cup of tea waiting for Maguire to cheer him up after.
Sarn (Van Der Vaart wa spot on) COVID free West Australia.

To the Glazers
If Ole has to go, could you let captain Maguire stay forever?
Aidan, Lfc (still bitter about how good they were in the 90s/00s)

Justice for F365
Can we have a ‘where are they now?’ on all those United fans who wrote into the mailbox almost on a weekly basis blasting the site writers for criticizing Ole? The ones who sent so much abuse and vitriol to F365 whenever the site ran a piece saying Ole wasn’t up to the task? The ones who called the writers bullies and tabloid writers for saying what most other reasonable people were saying?

United’s defence
I actually think United’s best centre back pairing might be Varane and Phil Jones, that’s how hapless Maguire, Lindelof and Bailly are. Who knew that all he had to do was skulk around the physio’s room for a few years? #Likeanewsigning
Chris MU

Random musings
What’s going wrong at Leicester this season is they have changed tack from the last few years which has resulted in progress to an fa cup and top so so close champions league achievements. They usually lose a key player and the tactical decision of how the season is going to be is pretty much made for them, bring in a suitable replacement and then maybe one or two other heads. That didn’t happen in the summer for the first time in a long time, so they were left to their devices. The smart thing to do would have been to make no changes at all, and maybe just bring in one or two heads as back up. I lost count, but they brought in a lot of new faces last summer, Daka and Soumare would have been just fine on their own but they brought in Lookman , Bertrand, and Vestergaard, spurred on by the injury crisis they had last season that again interrupted with their top 4 desires. They aren’t playing like top 4 contenders, so things are becoming cluttered. The former two seem like progressive punts that are worth it, the latter three seem unnecessary.

Utd were pants yesterday but let’s give credit to Watford, they took all their chances very well. I don’t think they’ll be going back down with the potential to perform like that (even against the leagues comedian team)

Brace yourselves for a long winter of Arsenal fans dominating the misery led themes of the mailbox, Utd will get their new man in and have a manager bounce so will be less turgid to listen to about the hellishness of it all, but Arsenal have started their run, of which all Arsenal fans are barely aware of. Arteta’s Arsenal verge from going on a terrible run were everything is shit and the future is nothing but shit, then come out of that with typically a 9 game run were they perform quite admirably overall, when the shit hits the fan everyone seems to firget that a 9 game positive run is around the corner, and when the 9 game positive run is happening everyone forgets that they are kind of shit and you hear things like “I’d take Arteta over Pep” said proudly without any irony from football related figures. Get ready for the 9 game run all…

Chelsea and Pool – They are both walking it. Chelsea are higher positioned but both teams are knocking others over with ease. It’s hard to pick out a winner, I expect both squads to have a very good season with one of them (or City) trumping the league. Expect a 3 horse race til the wire.

Wolves – Going very tidily about their business, last season brought fears that the hubble had finally burst, “the experiment” was over, but it looks like it isn’t and there could be some good times to come.

Stephen Gerrard and Dean Smith – Great starts for the new men, because of the form of others (whisper it) Norwich with 2 wins on the bounce don’t actually seem certain of doom. They probably will go down unsurprisingly when it happens but things look possibly optimistic. I think Utd being so comically bad took the focus off them and now they’re more refreshing an outfit now that everyone’s not laughing at them.

Crackers – It’s a good game day when there are at least two 3 – 3 efforts. Long may it continue.
Dave (is this a record, 3 premier league managers making debuts at the same time mid season? Howe being at home with Covid could be a technicality issue), Dublin

Chelsea thoughts…
With Manchester United having another nightmare afternoon I am sure the mailbox will be full of angry, frustrated and upset fans, rightly so, maybe even some banter comments.

But I just wanted to share my quick thoughts on Chelsea’s lunch time mauling of Leicester, what a performance, yet another clean sheet and we didn’t have Romelu Lukaku, we might be European champions but to win a title takes a different level and consistent mindset, however I’m starting to believe we really could be a solid contender this year, are we the best in England? I’m not to sure on that one, Liverpool look incredible and Manchester City showed last season how they can turn on at any point and accelerate past everyone
The Admin @ At The Bridge Pod