Home All The News Sagna: I am teaching Mangala how to defend 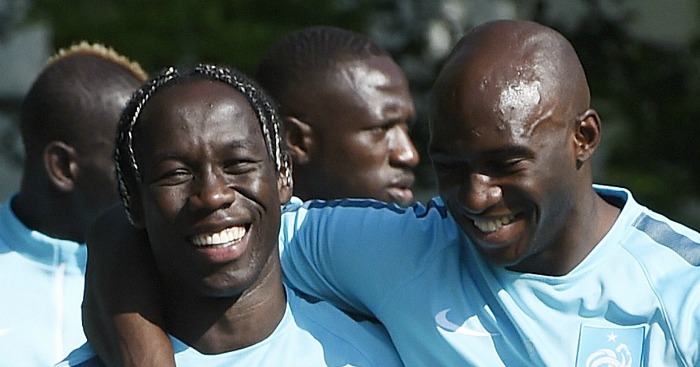 Manchester City right-back Bacary Sagna claims he is tutoring team-mate Eliaquim Mangala on how to improve his defending.

Mangala moved to the Etihad Stadium from Porto in the summer of 2014 but has often struggled, leading to a barrage of criticism and reports he was on his way out of the club in the previous transfer window.

And Sagna, who plays alongside the 24-year-old for France too, has revealed he has taken his compatriot under his wing.

“He is working really hard. I stay with him after training, to work on his position and control of the ball, and he’s doing quite a lot to make a difference. He wants to get better,” he said.

“Most of the time you forget he only came last season to this league. This league is difficult, especially when you come from abroad you need time to adapt. I think he is doing quite well. Of course it’s never easy to take criticism but he’s still young.

“The club bought him for a lot of money but it’s not easy to deal with it because he is always going to have that image, that he’s the most expensive defender.”

City spent a whopping £32million to land Mangala and Sagna believes that has put a lot of unfair pressure on the centre-half.

“The big difference between him and myself was that he was bought for quite a lot of money, so people will expect him to be above everyone – but he’s still a human being. He can make mistakes but he can do well and I am sure he is going to do even better,” he said.

“It’s not easy. I want to remind everyone that to come and play in this league is not easy at all. I had a chance to come and it was different for me. I came at the same age, 24, and from the first season I had, everything went well.

“Now we have a setback with him but he started the season very well and we didn’t concede any goals. But when times are a bit harder, the first ones to blame are the defenders.

“I’ve been blamed, he has been blamed but that’s football. We have to deal with it, we have to learn. He’s doing his maximum to improve.”

City’s defending is likely to be tested when they travel to Leicester City on Tuesday night.

With Vincent Kompany having suffered a recurrence of his calf injury, Mangala is likely to start at the King Power Stadium, where he will come up against the deadly duo of Jamie Vardy and Riyad Mahrez.

“We have to focus on us, on the way we want to defend, how we want to communicate with each other. We want to dictate the game. We want to show we are City and we want to be successful this season,” Sagna added.

“I heard about Mahrez in France when he played for Le Havre. He is a top-quality player. He has the level to play for big teams. He enjoys playing and he doesn’t think too much – he is instinctive.”