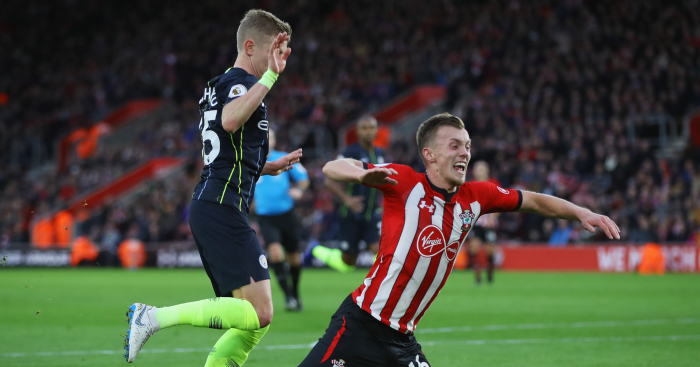 Ralph Hasenhuttl has sat James Ward-Prowse down and told the Southampton midfielder to be more aggressive to maximise his talent.

New Saints boss Hasenhuttl revealed he had a frank meeting with Ward-Prowse in a bid to help the 24-year-old realise his full potential.

Southampton’s Austrian manager told the one-cap England star to toughen up – and now hopes to see the best of the versatile midfielder.

Hasenhuttl was encouraged by Ward-Prowse’s performance in Sunday’s 3-1 defeat to Manchester City, despite the academy graduate’s luckless own goal.

“This can be a big chance for him now, absolutely,” said Hasenhuttl. “Because he’s a flexible player, he can play a lot of positions in the game.

“He can play as a number six and also on the wing. So I’m looking forward to this as a big opportunity for him and for us.

“I had a face-to-face meeting with him also, and told him what I think is his strength and weakness.

“Sometimes he wasn’t hard enough, not aggressive enough at winning the ball, getting in the duels.

“We saw against Manchester City a step forward in this manner, and it’s a good way for him to keep going now.”

The straight-talking Hasenhuttl has certainly improved the Saints since replacing Mark Hughes at the St Mary’s helm.

Reigning champions City coasted to victory against Southampton on Sunday in truth though, with David Silva and Sergio Aguero both on target for the visitors.

Now they must take on Chelsea at Stamford Bridge on Wednesday in another daunting Premier League encounter – but one that Hasenhuttl insists will not overawe his men.

“This challenge is not much different to the opponent we faced on Sunday,” said Hasenhuttl.

“If you want to take points off Chelsea then you have to play a perfect game. So that’s what we’ll have to do on Wednesday.

“We knew this period over Christmas would be tough, that’s nothing new.

“But I see the character and the mentality of the team is absolutely OK; they believe in their qualities and I think we can improve and be better than we were on Sunday.

“We performed better in our victory over Arsenal, and we have to perform better again in future.”