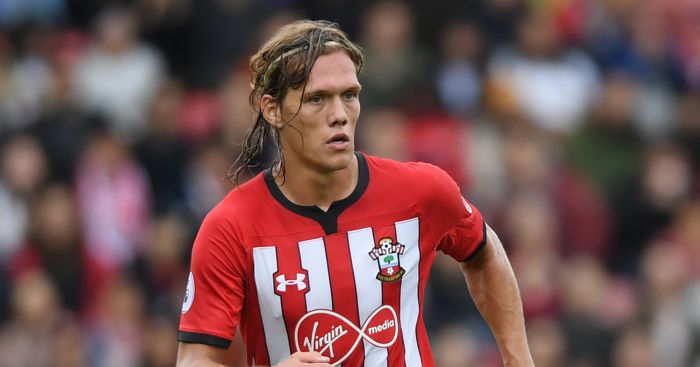 “What’s in a name?” said Juliet (a noted Hellas Verona supporter), and she was right. It doesn’t matter if you’re called John Smith or Carlos Alberto or even Jan Vennegoor of Hesselink, you play your position in your natural style. But there are some names that just seem to fit the player. Diego Maradona carries natural elegance but a certain danger as well. Closer to home, Chris Wood is a solid striker with a little bit of nous.

And then there’s Jannik Vestergaard, a name you might not have heard yet. But you know exactly what he is: a powerful central defender, very good in the air. If his first name were Bjørn, he’d be just a bruiser, but the Jannik adds a certain technical skill, and maybe some pace too. And judging from his debut against Burnley, that’s just what Southampton got when they signed him over the summer.

Saints ended last season without a defensive anchor, a crucial role that’s been vacant since the loss of Virgil van Dijk, whether by injury, attitude, or plane flight north. Maya Yoshida, Jack Stephens and Wesley Hoedt did their best, but none convinced on a consistent basis. So the time was ripe to shell out for a new name.

Vestergaard came from the Bundesliga, where he was a regular for mid-table teams Hoffenheim, Werder Bremen and Borussia Mönchengladbach. He even made the Denmark World Cup squad this summer, although Andreas Christensen and Simon Kjær kept him out of the line-up. It’s a decent pedigree, just the sort you’d expect for Southampton, who grabbed him early in the window for a not-at-all-negligible £18m.

Mark Hughes is nothing if not conservative, and so against Burnley on Sunday he started three central defenders, with Vestergaard in the middle and the Stephens-Hoedt combination surrounding. It’s a natural spot for the Dane, and he wasted no time in proving why. The match was less than a minute old when he produced his first headed clearance – one of twelve on the afternoon, all but one of which removed the danger in authoritative fashion.

At 6ft 6 there’ll be many more of those to come, but he’s not just an aerial clearance machine. He’s surprisingly wiry and plenty mobile (remember the “Jannik”), and did an excellent job marking Chris Wood, once even going all the way into the Burnley half to stay close. Once or twice he allowed his man a bit too much space, but at no time was there serious jeopardy. He also came out of the back line a few times to win the ball, timing his interventions perfectly.

As you’d expect from a Bundesliga defender, he seems very comfortable with the ball at his feet. Mostly he played the simple pass to one of the wide defenders, but on no less than four occasions he sent a penetrating ball forward to start an attack. He knew when to get rid, but he’s not a hoofer by any means.

You have to figure he’ll be an asset at set pieces, too. On Sunday he got free on a corner and headed over the bar, and probably should have done better with the chance. But since he tallied 14 goals in Germany, we can expect him to find the back of the net at least once this season.

Maybe best of all, he looks like a leader. The camera caught him pointing and shouting quite a bit, and although Burnley dominated possession for the first hour, the Saints’ defence looked on the whole better organised than in some time. When Hughes switched to a back four in the second half, Vestergaard didn’t miss a beat, and neither did his teammates.

I saw only one consistent weakness, an odd one under the circumstances. Although he was rock solid in the air in the box, he was ordinary in coming out to challenge for long aerial balls. He lost as many as he won, and didn’t always time his leap properly. He also fouled Wood unnecessarily a couple of times, and at the very end of the match, perhaps tiring, he let a fresh Sam Vokes slip a hair in front of him for what could have been a dangerous chance.

So he’s not perfect, and although you never know, he probably won’t prove to be in van Dijk’s class. And while Chris Wood is a solid striker with a little bit of nous, soon there’ll be names like Aguero and Lukaku on the other side of the ball. But it was a most promising start, and at 26 years old with a four-year contract, there’s every reason to believe Saints will be happy with his signature. Jannik Vestergaard by name, Jannik Vestergaard by nature, and that name should be on the teamsheet for some time to come.