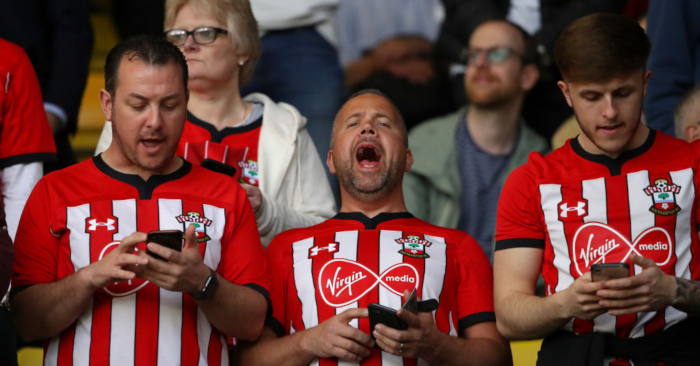 What was Ralph Hasenhuttl appointed by Southampton to defeat? The plodding attacking football inherited from his predecessors, each of whom seemed to press the brake pedal closer to the floor. Well the Austrian has opened the throttle and, on Tuesday night, Shane Long decorated his short managerial reign with a natty signature, scoring after just seven seconds at Vicarage Road.

Southampton will have to wait a few more days to be mathematically safe, but they know now deep down that they’ll be here next season. Hasenhuttl deserves great credit for that. He’s yet to make this side a spectacle – RB Leipzig 2016-2018 they certainly aren’t – but they do now show an intent to play at pace, and there are signs of a burgeoning attacking philosophy.

There are imperfections, plenty of them, but they’re all understandable. Precedent suggests that teams transitioning between different styles make that journey over months rather than weeks, and so the occasional confused run or positional anomaly can be forgiven for now. In any case, Objective A for Hasenhuttl was survival and, barring something absurd, the point taken from Watford should complete the task.

But presenting this as a triumph of style would be wrong, because that’s not what has made Southampton harder to beat. It’s helping, of course, because playing with ambition is fundamental to any improvement. But that’s not the quality at this recovery’s core. The difference in these players is more ethereal than structural. They’re more honest. They’re nastier. At their worst, Southampton used to look terribly afraid, particularly at home. Often, their football was a self-fulfilling prophecy, full of dread and negativity. They shuffle the ball passively around the pitch, waiting for their own fans to turn and their opponents to bite.

Think back to the game with Manchester United at home, the last managed by Mark Hughes. Southampton started well, racing into a two-goal lead inside twenty minutes. Just after the half-hour, though, Romelu Lukaku capitalised on a ricochet to pull a goal back. At that point, it was inevitable that the lead would ultimately vanish.

This was still Jose Mourinho’s United remember, a team who had drawn at home with Crystal Palace the week before, yet it took just six more minutes for them to equalise.

The truest comparison would be the Arsenal game, Hasenhuttl’s first win in his new job. Ten days after his arrival, Southampton were hardly a side cast in his image and yet, already, they demonstrated a new level of persistence. New manager bounce? To an extent, perhaps, but would Shane Long or Charlie Austin have made the runs which led to the winning goal had Hughes still been in charge, or Mauricio Pellegrino? What about under Claude Puel? Most likely not, because their teams so rarely exhibited that kind of optimism. They weren’t definitively better by that point – in fact there were quite a few more dark days on the horizon – but they had at least shed their self-pity. Their minds were on how they might win the game, not on how they could lose it.

Four months on, that brighter spirit is backed by a growing technical merit. The main beneficiary, clearly, has been Nathan Redmond, who has suddenly become the goal-threat he always promised to be. Played in a more central role tailored specifically to his abilities, he’s a greater influence on this side now than at any other point of his Southampton career. That may prove a temporary situation, and he’s really the only truly dynamic ball-carrier that Hasenhuttl possesses, but whatever the case, his dramatic improvement shows the design behind a forward line which was often neglected.

It’s an interesting situation and one which, in a broader sense, contextualises the improvement. Les Reed left in 2018, paying the price for a prolonged period of botched recruitment. It seems a long time ago that the club were winning admirers for the way they moved through the market and, in the years since, they have become emblematic of the kind of confused thinking which inflates wage bills, stymies progress and wastes money. How many of the players currently under his charge would Hasenhuttl have willingly signed? How many fit the template he created at Leipzig? Redmond, possibly. Bertrand and Hojbjerg too, but beyond that the list is short.

The implication being that he’s dealing with square pegs; a lot of them. The point isn’t that Southampton’s squad is poor, although its imbalances remain stark, but that these newer, more technocratic managers generally depend on specific types of player. They’re concerned with role and function more than literal ability. Hasenhuttl was appointed after Southampton won just nine Premier League points between August and December. Since then, he’s collected 28 and done so with a group of players assembled to perform in a completely different way and to respond to a different style of coaching. That shouldn’t be underestimated; he’s shot under-par with somebody else’s clubs.

The bottom of the league this year is not of a high standard and so it’s tempting to dismiss Hasenhuttl’s effect as negligible. But that ignores what Southampton were: nineteenth when he arrived and deservedly so. They weren’t obviously superior to Fulham, Huddersfield or Cardiff – that was their peer group. Now they are, now they belong somewhere else. Andre Gray’s late equaliser on Tuesday left them short of their forty-point target and denied them the win that their performance probably deserved, but that shouldn’t disguise how this group has been transformed.

Nor how different the supporters’ mood seems to be. Their booming choruses at Vicarage Road were conducted by what happened on the pitch and by relegation’s receding threat, but likely also by the future promise of something other than a joyless grind. After all the benign football those fans have watched and how quickly their club became part of the league’s walking dead, that must be such a liberating feeling.

So Hasenhuttl has likely delivered safety this year. Next season and beyond, though, he’s a candidate to recapture the identity which was so needlessly squandered before he arrived. And that was always his real mission.