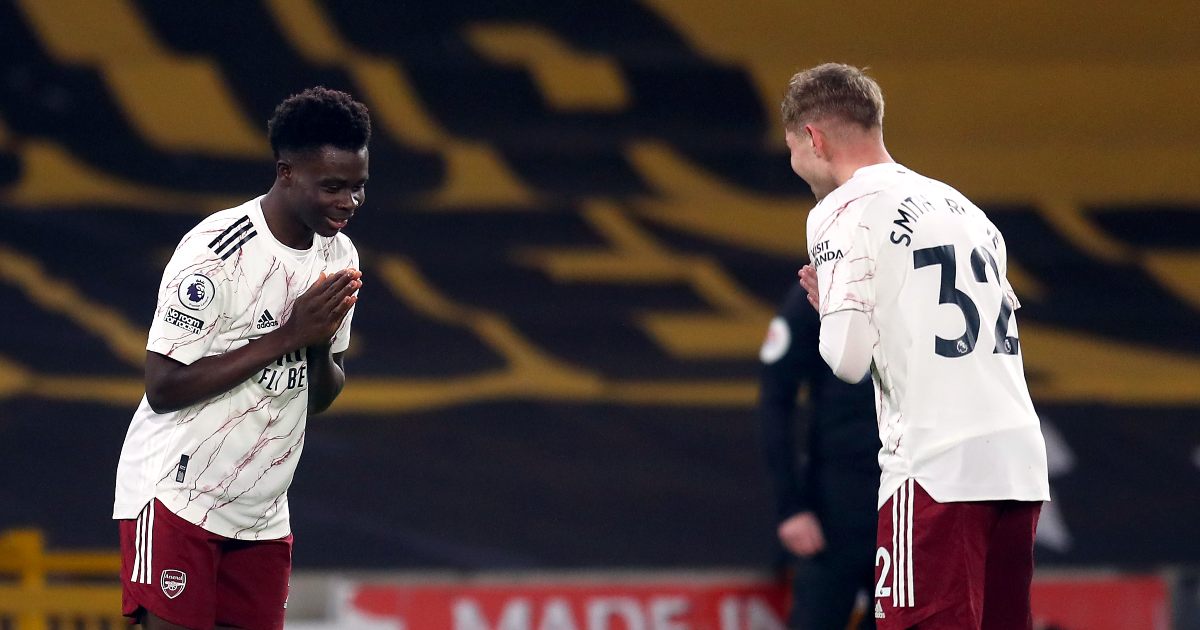 Teenage starlet Bukayo Saka extolled the virtues of fellow Premier League youngsters on Saturday as he built his ‘ultimate player’.

In an interview with the league’s official Youtube channel, Saka – who has excelled in a faltering Arsenal side this season – was asked to combine the attributes of his colleagues in an attempt to build the perfect player, and did not hesitate to heap praise onto those starring for the Gunners’ rivals.

Beginning with pace, Saka opted for teammate Gabriel Martinelli, saying: “Just watch him play and press, the way he goes, he doesn’t stop.

“He’s not only just fast, he can also run a long distance at that same speed and just get faster.

“You look at his Chelsea goal [last season] – he didn’t slow down or get tired. It’s not just his pace it’s his engine as well. It’s crazy. It’s like he’s got a battery pack on his back.”

Next, however, Saka was asked to nominate a standout candidate in the shooting category, and he was unequivocal in his selection of Manchester United forward Mason Greenwood, citing his use of “both feet” as the salient factor in the decision.

Saka chose himself for dribbling, but when it came to the best defender, the Arsenal man was unable to look past Old Trafford again: “Defending, Aaron Wan-Bissaka. I’ve rarely seen him get beaten, so I’d say him.

“When I played against him, I didn’t find myself a lot in those situations, but I could feel what he wanted to do as I’ve obviously seen him play before. It’s about not going into the trap he sets for you.”

For strength, it was Chelsea’s Reece James: “He’s so strong, so powerful.

“His technical ability is amazing as well. He’s good enough not just to play right-back but can also play in midfield as well.

“He’s that good for me. The combination of his technical and physical skills makes him so good.”

Finally, Saka was asked who the best passer in the league is, and seemed torn between Phil Foden and Emile Smith Rowe before ultimately succumbing to club loyalties and settling for Smith Rowe.

The 19-year-old was effusive in his praise of the playmaker: “[He has] settled in perfectly.

“He was patient for his opportunity and I think he deserved it. When he got it he took it and showed the impact he can make for the team.

“He’s a livewire across the pitch, he’s everywhere, he will run into space, pass into space and create opportunities for all of us. I love playing with him and I’m really happy with what he’s done in the team since he’s come in.”