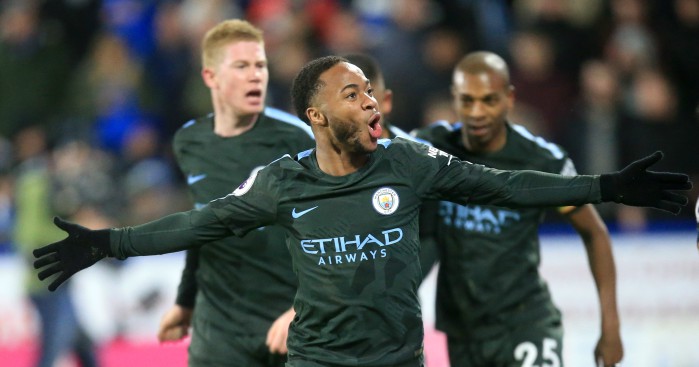 An unusually straightforward week, with very little shoehorning and few difficult choices. Add in the chance to honor some relatively unsung players, and it’s a great gig. We’ve got a 4-4-2, with the wingers pushing up to make it a 4-2-4 in attack.

Goalkeeper: Jonas Lössl (Huddersfield Town) It was the kind of week where almost everyone had one notable moment, but very few had more. Simon Mignolet had a couple of beauties but came out once wrongly on a corner and misjudged Willian’s goal; Petr Cech had a good all-around game both saving and coming off his line. I went with Lössl for two good saves from Sergio Aguero and the excellent save from Gabriel Jesus that rebounded off Raheem Sterling’s chest and in. Mat Ryan was equally worthy for his wonderful double save, but as always, when performances are in the same class the tiebreaker goes to the player who hasn’t been on before.

Right-back: Kieran Trippier (Tottenham Hotspur) I would have liked to have left this spot vacant, but there was a clear left-back candidate, and you can’t break the symmetry.  Joe Gomez had some decent moments in attack and defence, but should have cost his team a goal by failing to cut out a back-post cross. Shortly afterwards he also made a poor clearance that luckily didn’t fall to a Chelsea player. Trippier got a few good crosses in, made some probing passes, and won the ball a few times. In an uninspiring week that was enough.

Centre-half: Cesar Azpilicueta (Chelsea) We’ve all run out of superlatives for this guy. Maybe his best play of all was the one he didn’t make: reading Mo Salah’s run and almost getting there to block the shot.

Centre-half: Shane Duffy (Brighton & Hove Albion) Early in the season, I had him down as the junior partner in the firm of Dunk & Duffy. But although Dunk has more natural talent, he also takes more risks, and they don’t always pay off. Duffy is the steady one, who sends back everything that comes his way, and that’s what he did most of the evening against Manchester United.

Jonny Evans and Ryan Shawcross both had very good games blemished by crucial mistakes: Evans lost Harry Kane for the Spurs goal and Shawcross reacted poorly on the crosses for Crystal Palace’s two tallies. Christian Kabasele had a strong second half vs. Newcastle, although since almost everything he does looks spectacular, it can be hard to judge how good he really is.

Left-back: Ryan Bertrand (Southampton) It was only Everton, but he tore up the right side of defence with run after forward run. Made me feel good because a few weeks ago I wrote it was important to get his pace into the attack. Two nice assists on crosses, one low and one high.

I hated to leave Gaetan Bong off, not only because I had a pun on ‘hit’ all ready, but because he was excellent in defence, although beaten at the far post leading to Ryan’s double save. Alberto Moreno deserves mention for defending much better than anyone could have expected. Ashley Young and Sead Kolasinac also had decent attacking games, although the Arsenal man needs to improve his defence. But Bertrand was sensational.

Central Midfielder: Pierre-Emile Hojbjerg (Southampton) With Oriol Romeu suspended and Mario Lemina not fully fit, the young Dane got his chance, and took it with both feet. It was Only Everton, but he may have given the best individual performance in this spot all year. Hunted down the man with the ball, used strength and technique to win possession, had a sure touch, passed intelligently all game. His weakness has been slow decision-making on the ball, but there was no hesitation on the beautiful pass that released Ryan Bertrand on the move leading to the first goal. Unfortunately, if Romeu and Lemina stay available, he’ll have a tough time breaking through. But he laid down a sizeable marker. Good statline, too: 121 touches (!), 91.7% pass completion, four tackles, three interceptions.

Thank you ever so much for making Football enjoyable today

Central Midfielder: N’Golo Kante (Chelsea) His first time on this list, because my standards for him are too high. Was beaten on the sequence leading to Salah’s goal, but a lot still had to happen before the ball went in the net, and he was quite excellent otherwise. Dale Stephens, who’s made this list once before, had a very tidy game for Brighton.

Winger: Mohamed Salah (Liverpool) If he keeps playing like this, I’ll keep putting him in. Brilliant but thwarted in the first half. I have no idea why he switched to the left early in the second half, but it looked like the wrong decision – then came the beautiful run and finish. Compare Eden Hazard, also brilliant and thwarted early, but who faded in the second half.

Winger: Raheem Sterling (Manchester City) Most of his best performances for City this season have come through the middle, but here he was a classic winger, getting past defenders time and again until they broke. The penalty was well-earned, and the goal was too: get yourself in right spot and something good is likely to happen. Just like against Bournemouth.

Ruben Loftus-Cheek was a handful again, and Johan Berg Gudmundsson impressed with his ball control and passing. Xherdan Shaqiri was a bit spotty most of the match but had the goal of the round. And although I’m not an Andros Townsend fan, you have to admit the guy goes all out. When he gets a few things done as well, as on Saturday, he’s worth watching.

Striker: Salomón Rondón (West Bromwich Albion) Now we know why Tony Pulis was fired: he doesn’t read F365. Gary Megson does, and made sure to show Rondón a collection of Ben the Baggie’s missives. The Venezuelan responded with a fantastic all-around performance, including a nicely taken goal and outstanding hold-up play. As big as he is, he somehow gets bullied by defenders, but here used his considerable physical attributes to excellent effect. Davinson Sánchez, not a flyweight himself, was second best all afternoon. Keep those e-mails coming, Ben.

Striker: Charlie Austin (Southampton) After Callum Wilson’s hat trick last week, another feel-good story. You could tell he was ready from the kick-off: he threw himself about, brought his teammates into the attack, and got into good positions, once hitting the post. It Was Only Everton, but those were two classic headers. Let’s hope he has a lot more mileage left in those legs. For now, he’s the starter.

Along with Bong, the player I most hated to leave off was Max Choupo-Moting, who gave a rather remarkable performance against Crystal Palace. Playing as a central striker for the first 66 minutes, he never got near the goal, but was amazingly good linking up with the rest of the side. Shifted to the wing when Peter Crouch came in, he was still no threat, but again seemingly found a man with every touch. He finished with no shots and no key passes, so maybe it wasn’t that great a showing. But it sure looked pretty.

There’s no Team of the Midweek, because given kick-off times I can’t watch all the games fast enough to get in a timely report. I’ll be back on Monday with the regular feature, based on next weekend’s games.