Home F365 Features The weirdness of the FIFA Best Awards… 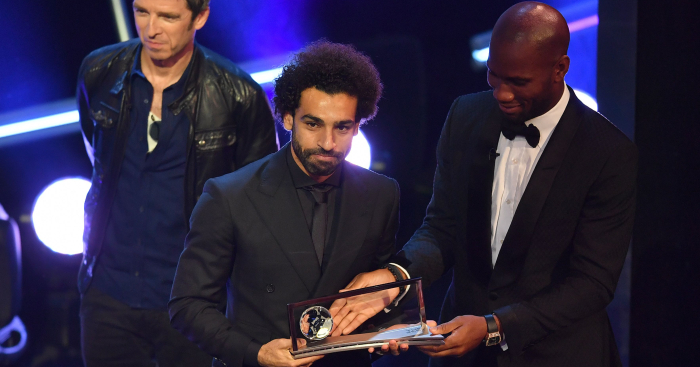 The FIFA Best Awards in London left a few of us scratching our heads. How did Mo Salah win the Puskas Award? How can Thibaut Courtois be the Goalkeeper of the Year but fail to make the Best XI?

How did Mo Salah win the Puskas Award?
Christ, it wasn’t even Mo Salah‘s best goal of the year. His strike to earn Liverpool a 1-1 draw at home in the derby against Everton last October was a beaut, but the best goal scored on God’s green earth in the last 12 months?

If Brexit wasn’t evidence enough, Salah’s goal winning this award is conclusive proof that you cannot trust the public to vote on anything. Especially when it comes to football. Even the BBC caught on three years ago by changing their selection process for the Goal of the Season award after Arsenal fans hijacked the vote to earn Jack Wilshere an undeserved honour for a final-day half-volley against West Brom.

Every Puskas goal since 2009. Just look at Salah's compared to the rest😭Ridiculous that FIFA allows fan voting on this type of thing pic.twitter.com/5gh0lP5A9h

FIFA are hardly likely to be perturbed that the Egyptian stole some of the headlines and Salah sure deserved some recognition for his outstanding season. He was shortlisted with Luka Modric and Cristiano Ronaldo for the Player of the Year award, so of course he was bound to be in the FIFPro World XI.

Even in a side featuring four forwards, there was no room for Salah. Fellow Player of the Year nominee Cristiano Ronaldo joined Lionel Messi and Kylian Mbappe in a frightening forward line with Eden Hazard crowbarred in on the left of midfield to the side of N’Golo Kante. At least the Chelsea machine is selected in the right position for someone…

This particular quirk highlights the separate voting procedures. Around 25,000 current players vote to decide the FIFPro XI, whereas the vote for the FIFA Best individual awards are split equally between national team coaches, their team captains, media and fans.

Well done to all players that have been selected! 👏

Why was Thibaut Courtois named Goalkeeper of the Year – but David De Gea is in the World XI?
Neither Courtois nor De Gea had their best year. Courtois had a bang-average club season before a very creditable World Cup while De Gea’s year played out in reverse. The Manchester United keeper wasn’t even on the shortlist for the Goalkeeper of the Year award but his fellow pros preferred him in their sticks.

The Goalkeeper of the Year award highlighted that the last 12 months will not go down as a vintage year in goalkeeping terms. Kasper Schmeichel had four good games at the World Cup with Denmark, who got as far as the round of 16, and though Hugo Lloris captained the winners France, his gaffe in the final will have counted against him in the reckoning for the award. So the ‘panel of experts chosen by FIFA (former goalkeepers and strikers)’ were left with little option other than to go for the Golden Glove winner.

How did Dani Alves make the World XI?
Dani Alves had a quite decent first season before missing out on the World Cup due to a cruciate ligament injury which has kept the 35-year-old out of action since the start of May. So what happened here?

Well, presumably a vast number of the 25,000 players balloted wrote down the name of the first right-back that came to mind.

You might suggest that Kyle Walker would have deserved a spot, after a superb year under Pep Guardiola for Manchester City before a splendid World Cup as the right-sided centre-back. You could certainly make a more logical argument for Walker for Dani Alves.