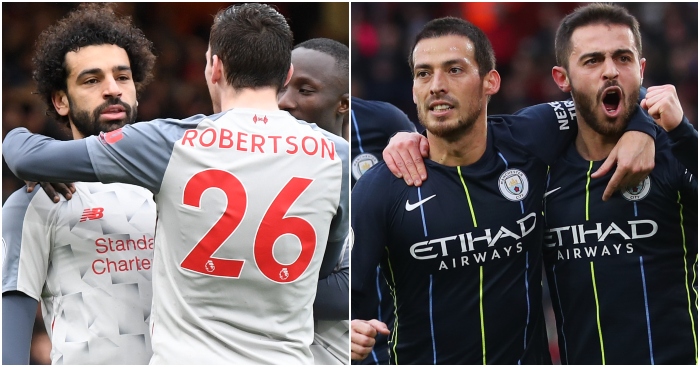 Players are ranked in order of Big Chances created (basically a chance that should be taken), according to Opta, with chances created used as a tie-breaker…

Runs further than anyone else, makes more tackles than anyone at City not named Fernandinho, and knows how to use the ball when he wins it. Arguably Manchester City’s player of the season during a campaign in which they remain on course to win the bloody lot.

The Bournemouth attacker keeps his place in the top 10 despite missing six games and the whole of February with a knee injury. A goal and an assist in his first match back convinced Gareth Southgate to keep him in his England squad.

There's a competition going on at Liverpool…

The two full backs are on 🔥 this season… pic.twitter.com/MZrQGOTKkI

The England attacker is neck-and-neck with Sergio Aguero for the title of City’s most productive player, with each having played a part in 35 goals in all competitions so far this season.

One of the best buys of last summer has certainly been Everton’s best player this season. The 25-year-old has earned himself a recall to the France squad and made us al forget about poor Leighton Baines.

Even though just under half of the chances he has created have come from set-plays, Maddison > Messi…

Most chances created in Europe's top 5 leagues this season.
A surprising No. 1:

“Look, Zinedine, look! Look at me!” The Belgium star has been trying to catch Real Madrid’s eye by creating the most chances form open play in the Premier League this season. What will Chelsea do without him?

The Reds star is apparently not having the best season but he is still joint-top scorer in the Premier League and despite criticism for being too selfish, the stats suggest he is doing his bit for his team-mates too.

The Premier League’s smallest player has had a massive impact on Bournemouth’s season, maintaining his form after a flying start. While 26 of the chances Fraser has created have come from set-plays, only six players in the league have been more creative in open play, with Andros Townsend the only player in that group not part of this top ten.