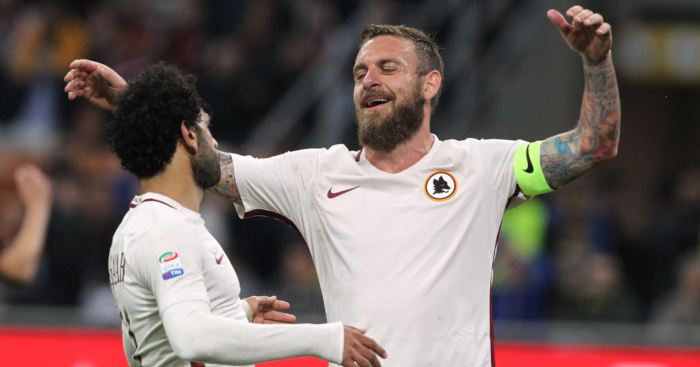 Mohamed Salah has hinted that he would like to see Daniele de Rossi move to Liverpool in the summer and admits it would be “beautiful” to see him in the Premier League.

The Italian will call time on his career at Roma, who announced they won’t be renewing his contract, after spending 19 years at the Serie A club.

In that time he scored 63 goals and made more than 600 appearances for the Giallorossi – but he only managed to win three trophies in that time.

And with De Rossi becoming a free agent in a matter of weeks, Liverpool forward Salah would love to see him try the Premier League.

“He is a legend of the club and of Italian football, not just because he is a great friend of mine,” said Salah.

“I don’t know what to say, I saw the game and the affection of the fans who saluted him. He made many sacrifices for his team, I would like to thank him, he is one of the best of which I have played with. Good luck for the future.”

Salah added: “A future for him in the Premier League? It would be beautiful, but I don’t know if it’s possible. It would be pleasing for me to play with him again, he is an optimal player.”