Home All The News Salah next? Five high scorers who weren’t ‘proper’ strikers 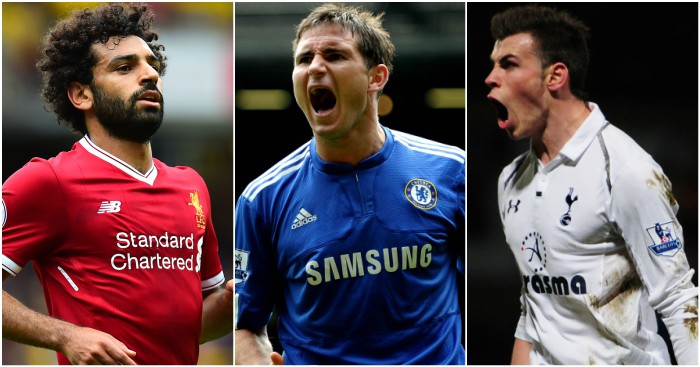 Jamie Carragher suggested Mo Salah ‘looks on course to get 25 goals this season’ and backed the Liverpool star to eventually eclipse Ryan Giggs as the Premier League’s greatest goalscoring winger.

Giggs only broke into double figures twice in 24 seasons in the top flight, with the Manchester United star’s highest tally being 13 – only four more than Salah’s current haul. If Salah maintains the scoring rate he has set during the opening 12 games of the season, he could get to 28, which would be more than the Premier League’s top scorer in 15 of the 26 seasons since 1992-93.

Breaking the 20-goal barrier is surely the first target for Salah, who will join the these stars who managed 20-plus despite not playing as a striker….

Matt Le Tissier – 25 goals in 1993/94
Six players scored more than 20 goals during the second season of the Premier League, a high that was only matched the following season.

Le Tissier also hit 20 in the First Divison in 1989/90 but his tally four years later was all the more impressive because it came in a team that was fighting relegation and eventually ended up finishing 18th in a 22-team league, having spent 24 matchdays of 44 in the relegation zone. Behind Le Tiss in the Saints scoring stakes was Neil Maddison on seven.

A 25-goal haul included six braces and a couple of hat-tricks. God we miss that man.

Peter Beardsley – 21 goals in 1993/94
In 1993/94, Newcastle United not only had Beardsley in the 20-goal club but also the Premier League’s top scorer Andy Cole who smashed in 34 for the third-placed Toon. Unsurprisingly, no team scored more than Kevin Keegan’s entertainers, but they also conceded more than anyone else in the top five.

Beardsley managed 21 despite missing the first seven games of the season and not scoring his first until October 30, after which he then netted nine goals in six matches.

Frank Lampard- 22 goals in 2009/10
After Beardsley, it was 15 years until a non-out-and-out striker broke 20 goals. Lampard smashed in 22 but Chelsea also benefited from Didier Drogba’s 29-goal haul as Carlo Ancelotti’s men won the double.

Lampard also weighed in with 16 assists and hit a fine vein of goalscoring form during the run-in when he bagged 12 in the last 10 matches.

Gareth Bale – 21 goals in 2012-13
Bale played occasionally off the front in 2012/13 but the Welshman spent the majority of his most prolific Premier League season in left midfield.

A haul of 21 goals and nine assists wasn’t sufficient to take Spurs back into the top four, largely because Bale’s tally was almost double that of the club’s next highest scorer – Jermain Defoe on 11. It was enough, though, to persuade Real Madrid to fork out a world record fee the following summer.