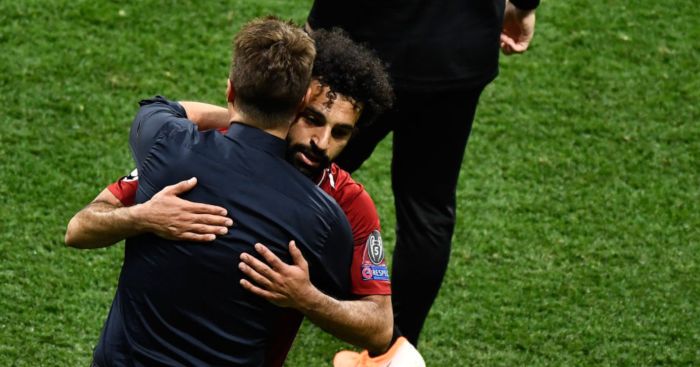 Slip slipping away
Ladies and gentlemen: a lesson in why not to be so bloody hyperbolic all the time, led by Neil Ashton of The Sun.

After a 0-0 draw in the first leg of their Champions League last-16 tie with Bayern Munich in February, these were his key Liverpool takes:

‘The confidence, the belief they can beat anybody in a big game, is slipping away.’

‘Last season’s finalists…are looking shaky and uncertain in the final stretch of the season.’

Less than four months later, Liverpool ‘held Tottenham at arm’s length’ in literally the biggest single club game possible. And ‘so much more could be on the way’ for this ‘shaky’, ‘uncertain’ side, too. Just presumably not if it is on the line ‘in a big game’.

But his best assessment of the newly-crowned European champions came even earlier – in January after defeat in the FA Cup to Wolves.

‘THIS was supposed to be Liverpool’s year.’

‘Instead they are still without a win this year.’

Message in a bottle
‘It is almost as if they are now giving Spurs a real fight to land the crown as the great bottle jobs of English football’ – Charlie Wyett, The Sun, February 25.

“We had the courage, the bottle to win the trophy. It’s just a great feeling” – Mo Salah, as quoted by Charlie Wyett in The Sun, June 3.

The Mesut Ozil impersonator with a finish as true as his final penalty, there.

Corner shop
‘As for Liverpool fans thinking it is finally going to be their year, disappointment is around the corner’ – Charlie Wyett, The Sun, February 25.

Griez the wheels
Of course, the football world moves on painfully quickly. No sooner had Liverpool’s Champions League celebrations ended had attention turned to what’s next.

The Daily Mirror have their finger on the pulse. What better way to bridge the gap between this and the transfer window by manufacturing and monetising speculation?

‘Antoine Griezmann sends Liverpool fans into meltdown with message to Roberto Firmino’ is the headline to an article about the ‘wantaway’ Atletico Madrid forward, to leave the reader in no doubt that he has dropped some sort of unexpected hint.

Over to you, guys…

‘The Reds became European champions for a sixth time on Saturday night as they beat Tottenham 2-0 in Madrid.

‘Jurgen Klopp’s players travelled back to Merseyside and embarked on a victory parade across the city with thousands of fans flocking to show their support.

‘Roberto Firmino documented the celebrations on a live feed on Instagram and even shared a moment with Jurgen Klopp, much to the delight of his followers.

‘And among those to comment was Atletico star Griezmann, who offered a simple clapping emoji.’

Bloody hell. #AnnounceAntoine it is.

Mediawatch has just one quick question: When did four entirely unserious tweets – and you can check for yourselves, that is pretty much the sum of it – become a ‘Liverpool fan meltdown’?

You are nothing, you are a fuel
‘Tottenham banned their players from speaking about manager Mauricio Pochettino’s future after their Champions League final defeat,’ writes Paul Jiggins of The Sun.

That seems a fair measure to take, considering the magnitude of the game and the fact that questions have been asked about Pochettino’s future for about 427 straight years now. There is only so much anyone – particularly a player not involved in such negotiations or decisions – can possibly say.

But no, this ‘gagging order’ will apparently ‘only fuel speculation he is set to leave despite only signing a new five-year deal – worth £8.5million a year – last May’.

The only ‘speculation’ that asking players not to talk about their manager’s future after a Champions League final will ‘fuel’ is from those with absolutely no imagination or originality.

Poch job
But Jiggins goes even further in The Sun‘s football pullout. He says Pochettino must ‘get rid of all the negativity at Tottenham’ by ‘announcing once and for all whether he is blooming staying or going’.

Yep, Tottenham is a bloody miserable place to be right now. Imagine competing in your first ever Champions League final after not making a single signing for 18 months. Eurgh.

‘We should rightly be reflecting on one of the most incredible seasons in the North Londoners’ history and the key role Poch played in masterminding it.’

Go ahead. Literally nothing is stopping you except for your own desperation to make mountains out of molehills.

‘Instead, the only topic on Tottenham lips this morning is their manager’s future – and it is all his own doing.’

You definitely can’t move for Tottenham fans asking whether Pochettino is staying instead of reminiscing over what has been a glorious season. The only subject of discussion is definitely Pochettino’s future (despite Tottenham themselves putting a ‘gagging order’ on players talking about it because the media won’t stop bloody asking).

Jiggins goes on to mock and sneer at the idea of Pochettino wanting ‘assurances from chairman Daniel Levy about Tottenham’s plans before deciding whether to remain at the club’. It’s almost as if that is something any manager of any football club should expect as a bare minimum, particularly after proving their worth so definitively.

‘And all this despite signing a bumper five-year deal worth £8.5million a year just 13 months ago,’ Jiggins writes. How dare Pochettino want to review the situation after a season of immense overachievement?

But Tottenham are ‘in limbo’ and ‘a bit of bother’, surrounded by ‘a giant mushroom cloud of uncertainty’, ‘stuck in no-man’s land while their rivals are marching ahead with their preparations for next season’ as Pochettino continues to say certain things in public as leverage in private.

You don’t need Mediawatch to tell you how many signings Arsenal, Chelsea, Liverpool, Manchester City and Manchester United have made in comparison.

Speaking of Arsenal and United, Tottenham ‘almost qualified for the Champions League by default’ anyway. ‘Spurs would be playing on Thursday nights in the Europa League next term’ if the form of either of their rivals ‘been anywhere near regulation’.

Which is an odd way to say they finished fifth and sixth because they weren’t as good over 38 games as the team in fourth.

Mirror, Mirror
Even the Daily Mirror contemplate jumping on this doom-mongering bandwagon. Andy Dunn has penned a lovely article about Jurgen Klopp, mentioning Pochettino only once:

‘Almost lost during the interminable build-up to Liverpool’s marvellous triumph in Madrid were the contrasting reactions of the two managers to similar questions.

‘When Mauricio Pochettino was asked about the chances of him going to Juventus, he said it was not the time to discuss his future beyond the Champions League Final.’

That, folks, is all. So what headline is this article, almost entirely about Klopp, given in the newspaper?

‘Poch may walk…but Klopp will stay for long haul’

What’s up to 250,000 people between friends?
‘Up to 750,000 people lined the streets yesterday to welcome home their heroes after the 2-0 triumph over Tottenham Hotspur in the Champions League final in Madrid’ – The Times.

‘Up to half a million people hit the streets on Merseyside to get a glimpse of the team, who beat Tottenham 2-0 in Madrid on Saturday’ – The Sun.

Kinky headline of the day
‘Liverpool want to tie down Klopp’ – The Times.

Hey Siri, show me the most depressing screenshot in football journalism in 2019. pic.twitter.com/0X4QKlN9MA

Recommended reading of the day
Daniel Taylor on the Hendersons.