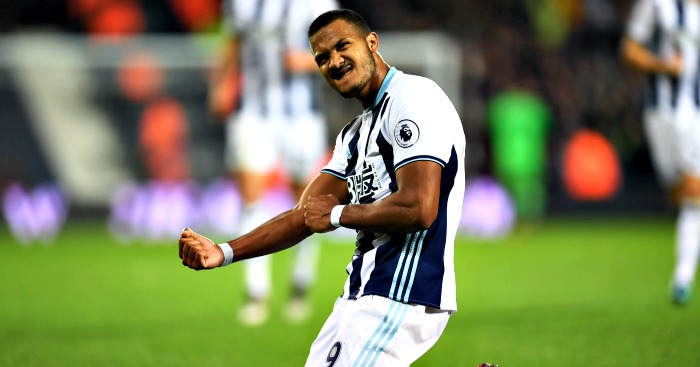 It must be a strange life to lead, being a West Brom striker. They are an anomaly, an outlier, a necessary contradiction of an attacker in a primarily defensive side. Whether charged with ‘providing a physical presence’, ‘holding the ball up’ or contributing as an ‘outlet’, it is a thankless task.

Just ask Saido Berahino, the goalscorer who cannot score, or Hal Robson-Kanu, a forward with just 43 goals in over 300 career appearances, but who has, according to the world’s governing body, at least, netted one of the finest strikes of the calendar year. A West Brom striker is a riddle, wrapped in a mystery, inside an enigma, flanked by Chris Brunt, and supported by James Morrison. Who would be a West Brom striker?

As it happens, that question was answered in the most emphatic of fashions on Monday evening. Along with the above cliches often uttered in reference to a lone striker, Jamie Carragher added another in the Sky Sports studio post-match. “He led the line superbly,” said the pundit of Salomon Rondon. And he was right. The Venezuelan dismantled a Burnley side who boasted more possession at The Hawthorns. The only difference? Rondon is a somewhat more potent force than Sam Vokes.

The 27-year-old had 41 touches – only one Baggies starter had fewer – yet he proved far too much to handle for a Burnley defence which has shackled Roberto Firmino, Philippe Coutinho, Alexis Sanchez, Mesut Ozil and Romelu Lukaku so far this season. Comparisons with the last of that quintet seem simplistic and facile, but Rondon’s performance was akin to the very best we saw of Lukaku at The Hawthorns and since his loan spell with the club. He was the consummate lone striker, facilitating his team’s forward play, defending from the front and, of course, scoring. He departed the field on Monday evening with a goal, an assist and a man-of-the-match award. Each was richly deserved.

“Last year was a bit of a struggle for him,” manager Tony Pulis said after the game. “He couldn’t speak much English.” The Baggies had parted with a club-record £12million for him in summer 2015. He scored nine goals in his debut season, chasing defenders, running the channels and likely causing long-term damage to his neck as he stared up at a long clearance from Jonas Olsson. Or Gareth McAuley. Or Jonny Evans. West Brom finished 14th last season, yet just 21 players scored more league goals; 15 played for clubs who finished in the top half. Of the remaining six, two were strike partners, and so could support one another (Odion Ighalo and Troy Deeney), two earned moves for over £20million (Andre Ayew and Georginio Wijnaldum), one scored more than a quarter of his goals from penalties (Gylfi Sigurdsson), and the other was Jermain Defoe. The Sunderland forward has carved out a reputation as one of the finest Premier League forwards outside of the top six; it is something Rondon is slowly working towards.

It would be an impossible job for some. West Brom average 11.2 shots per game, with only five sides averaging fewer. They have the lowest average possession in the Premier League with 40.6%. They attempt the fewest average passes per game, with 303.3. The ingredients are hardly appetising, but Pulis has chosen the perfect head chef to make chicken salad out of chicken sh*t.

Rondon’s continued improvement makes a mockery of the transfer business conducted by other clubs. West Ham publicly courted Alexandre Lacazette, Zlatan Ibrahimovic and Christian Benteke in the hope of landing a big name in the summer. They were left with Simone Zaza. A year earlier West Brom undertook the risk of signing a 25-year-old whose experience had previously been limited to the middle reaches of Spain and the unproven territories of Russia. It’s safe to say the gamble has paid off.

In a league where regular proven goalscorers are at a premium outside of the elite, Rondon is becoming a wanted commodity. The workhorse will never be a show pony, but he provides precisely what his side needs. In truth, he provides what West Brom’s competitors need, too.