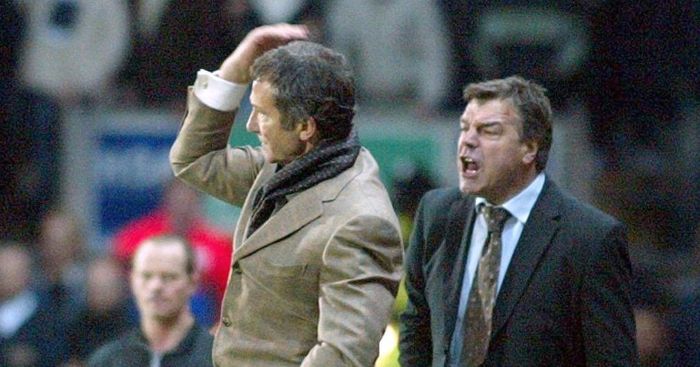 “To blame Bruce just yet is a long way off as he has only just arrived.”

Well alright. It is only September and thus a little early into his three-year contract to suggest this is entirely his fault (although it should be said that more fingers are being pointed at Mike Ashley than Bruce). Carry on.

“They did go down to ten men with a tackle that would have been perfectly legal in our day. He played the ball but his momentum carries him straight through into the opposition player and everyone calls that one reckless. I would like to know how you do that tackle. He couldn’t stand on his feet because he was too far away.

“I understand he catches the lad as he goes through the ball and we don’t want to see players injured but it is very difficult to make that decision.”

Here we go. Anyone who actually watched Isaac Hayden’s tackle on Dennis Praet be rightfully punished by a swift red card cannot possibly describe it as “very difficult to make that decision”. There is a reason “everyone calls that one reckless” – it’s because it was reckless.

And maybe that tackle “would have been perfectly legal in our day”. Thank god that perceptions have changed enough that players cannot get away with leaping off their feet to smash into someone else’s shins.

“In the end, it is how they capitulated. Down to ten men it is very difficult but they should have put up a better defensive performance. The ten should have sat in there and played the rest of the game out.”

Pray tell, Sam: who might be to blame for Newcastle not doing just that? Is there some sort of, say, coach, who might be in charge of implementing such tactics?

“Steve will be sleeping very restlessly at the moment. It is going to be a tough one up to maybe Christmas. But, in saying that, we have got to look at the situation and say he has got more points than Rafa had this time last year.”

You also have to look at the situation and say Newcastle played Tottenham, Chelsea, Manchester City, Arsenal and Manchester United in five of their opening eight games last season, losing each but only by one goal every time. Rafael Benitez himself will say they should have done better against Cardiff, Crystal Palace and Leicester (where they lost 2-0), but he earned more than enough patience before then to make up for it.

Oh, and Bruce has a £40m striker up front with a £20m player signed a club-record fee in January shunted onto the right out of position. Benitez had f**ing Joselu.

“I still don’t know why Steve is getting stick. Rafa didn’t get stick but Steve is. I just don’t understand it.

“Rafa didn’t get stick”?! Jamie Redknapp said “it’s been hard to watch” and “it’s not football” after a 2-1 defeat to Chelsea last year, adding that “he’s the only manager in the Premier League who can get away with this”. Richard Keys literally told him to sign players with his own money!

Hell, Allardyce himself said last September that “at my time at Newcastle, they would not have put up with me playing like that” after a couple of defensive-minded displays in narrow defeats to Chelsea and Manchester City. He was hammered for them.

Bruce also took over a side that finished 13th, Benitez had earned more trust and faith through his previous achievements, and Newcastle have already lost more away games to sides outside the Big Six this season (2) than in all of 2018/19. And we absolutely could go on.

When Bruce himself says “we have not done enough”, “we have not laid a glove on Leicester in the second half”, “we have let everybody down today”, “we have to apply ourselves better”, “it was a complete surrender” and “being a manager or coach, I ultimately accept the responsibility because it’s as bad an afternoon as I can remember,” you really do have to wonder why his mate feels the need to pretend it’s nothing to do with him.

Deja vu
Let’s play a game. Guess who Graeme Souness blames for Manchester United’s defeat to West Ham last weekend? You only get one go.

‘The first goal United conceded against West Ham seven days ago was the perfect example of the problem they have there. Their midfielders were under the illusion they were doing their job because they were goal side, but when somebody is 20 yards from your goal you can’t allow them to get their head up as West Ham’s midfielders did before Andriy Yarmolenko scored.

‘United’s midfield are too easy to play against. Nemanja Matic, Scott McTominay and co should have been sprinting out to put West Ham’s midfielders under pressure. If you’re a defender with that in front of you and the opposition have time to pick a pass, you’re going to be in trouble and that’s where United find themselves.

‘When I played in midfield, I had one thought: “I’m going to stop the guy I’m playing against today, then develop my own game from there.” In contrast, Pogba’s first thought is to show everybody how clever and cute he can be. If that’s the example your main man in midfield is setting, you’re too easy to play against, and until they fix it, United’s back five will be fire-fighting.’

The only problem? Pogba, whose apparent responsibilities include setting an ‘example’ to two-time Premier League-winning 31-year-old 48-cap international Nemanja Matic, did not play against West Ham. Still, what about that bad attitude and insistence on being ‘clever and cute’?

Touch Matip
Question: Does Garth Crooks stick Joel Matip at left-back and Matt Doherty in central midfield for his latest BBC Sport team of the week?

Answer: Of course he does.

Fox ache
As well as choosing Virgil van Dijk despite the fact that ‘the Sheffield United fans offered more of a threat than their strikers,’ and asking ‘have you ever seen anything like’ Hugo Lloris’s Cruyff turn in his own area (2018 World Cup final, anyone?) Crooks has some thoughts on Leicester.

‘If they can get their away form right then a top six finish is very feasible.’

Fountain of youth
Stan Collymore is probably right that Manchester United won’t sack Ole Gunnar Solskjaer before the end of the season, not least because of the scarcity of potential replacements.

As he tells the Daily Mirror:

‘We are not going to see Mourinho returning to the club he left last December, and Max Allegri’s name has been on no one’s lips because United want a more youthful approach.’

Screw the old b*stard who reached two Champions League finals. United want the ‘youthful approach’ of someone only five and a half years younger.

And Allegri gave debuts to Moise Kean at 16, as well as teenagers Paolo Gozzi, Andrea Petagna, Hans Nicolussi Caviglia, Manolo Portanova and Andrea Favilli among others recently, so let’s not pretend Solskjaer favours youth any more than he does.

For ‘youthful approach’, shall we just read ‘used to play for Manchester United’?

Arsenal will literally go third, two points behind Man City, if they win.

Also, two teams that have been in a steady decline for at least half a decade each still being shit is not news. Unless you are the Daily Mail and need something in ALL CAPS to go top of your website. pic.twitter.com/MHvdbX7wia

Recommended reading of the day
Dermot Corrigan on the Madrid derby.