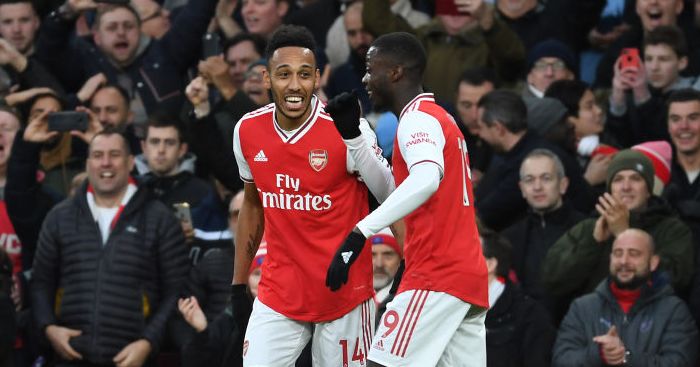 Aubameyang joined Arsenal for £58m in January 2018 and has been a goalscoring revelation since.

The striker scored his 59th and 60th goals in 95 appearances for the Gunners in the 3-2 win over Everton on Sunday.

Allardyce claims he could have been on the other side at the Emirates had Everton got their own way just over two years ago.

“We were searching for goals after Lukaku went and just wanted to test the waters.

“We spoke through his agent, and we had a shout that he was apparently desperate to get away from Germany and get into the Premier League.

“So we thought we’d have a dab, but we didn’t get very far to be fair.”

They get Cenk Tosun instead. Ah.

With 18 months remaining on Aubameyang’s current deal and speculation abound as to his future plans, Allaryce wonders what course of action Arsenal will take.

“I’d be worried about losing him, really worried,” he said.

“I don’t know what Arsenal are going to do. They can’t afford to let another one run out his contract with his value.

“He’s got 18 months left on his contract, so if he doesn’t sign a new deal this summer they’ll have to sell him.

“That would be a great shame for Arsenal fans and Arsenal, because what he’s done in goal terms has been absolutely miraculous.

“He is quality. He’s one of the few strikers who loves to run in behind, he doesn’t want to come to feet, he wants balls played down the channel, he gets on the end of it and slots them away.”