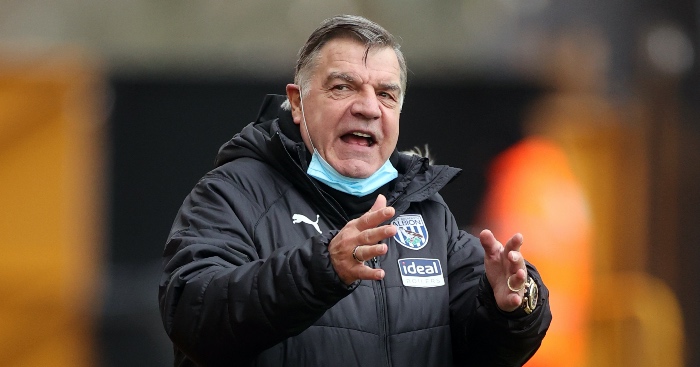 West Brom boss Sam Allardyce has praised his players for their ‘excellent’ performance in the 3-2 derby victory over Wolves.

The Baggies went ahead in the 8th-minute as Matheus Pereira scored from the spot.

Willy Boly had fouled forward Callum Robinson in the box.

Wolves came back to lead the Black Country derby at half time though. Fabio Silva bagged his first goal at the Molineux Stadium, before Willy Boly avenged the penalty by scoring from close range.

West Brom had a great start to the second half. They were brought level by Semi Ajayi’s header.

Robinson was then fouled in the box by Conor Coady, allowing Pereira to score his second penalty of the match.

West Brom held on despite a good chance for Patrick Cutrone.

Speaking after the victory, Allardyce said: “In the vast majority of that performance the plan, and the way the lads carried out the tactics, was excellent. It’s the best I’ve seen us in possession since I’ve been here.

“Apart from slipping up on a set piece which put us on the back foot I’d have to say the lads were excellent. You could have felt their heads go down when we were behind but they came bouncing back. We created other chances after going ahead which would have made it even better and then defended well at the end.

“It’s even better for the club and the fans because we’ve beaten our rivals in the Black Country derby. We look forward to gaining a bit of confidence now.

“Wolves let a lot of goals in on set pieces so we felt we could exploit that. We created more from open play than in any game since I’ve been here.

“I’m asking the players to improve their overall fitness and technique by one percent. Add that all up and it’s a big improvement. I’m asking for everyone to do that little bit more and be more consistent.”