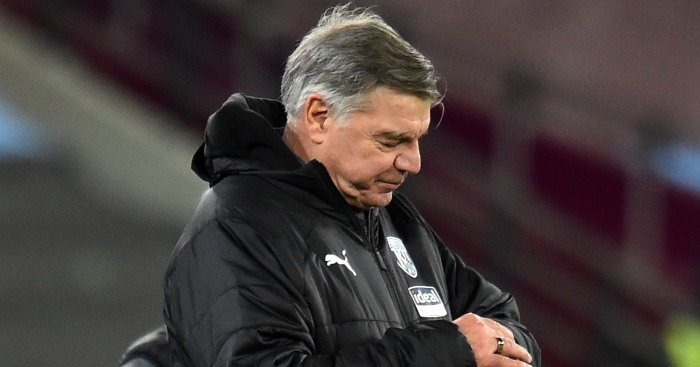 It’s odd to hear Sam Allardyce talking about hope. This is a manager who revels in the certainties of life and refuses to linger on the dreams, but maybe he has been forced to change tack by one of those certainties – Allardyce being the cure for defensive vulnerability and impending relegation – was swept from under his feet. Now he says ‘hopefully’ and nobody really believes that he has any hope or can engender much in West Brom players or fans.

The truth is that Allardyce has contrived to make a poor team worse. The same back five that held Manchester City to a 1-1 draw at the Etihad in Slaven Bilic’s final game – which left the Baggies two points from safety – has now lost 5-0 to the same opposition at the Hawthorns to leave themselves six points adrift of Brighton, having played more games than their relegation rivals. In seven games under the pragmatist who guaranteed robust survival, West Brom have conceded 22 goals; they conceded just 12 goals in their final seven games under Bilic.

Better teams than the Baggies will be blown away by this momentum-gathering Manchester City side, but this latest humiliation followed shellackings by Aston Villa, Leeds and Arsenal. Barring the 1-1 draw with Liverpool and the fortuitous derby win over Wolves, there has been literally nothing to suggest that this team of Championship-standard players will not be heading back there this summer.

Allardyce was described as a ‘genius’ by Pep Guardiola earlier this week but there has been a distinct lack of any other plaudits for a manager who usually inspires devotion in his centre-halves. There has been little ‘since Sam came in…’ talk from the players, whose affection for the boss is unlikely to be encouraged by a dressing-room lock-in after the City debacle.

The truth is that statistics show that Allardyce’s West Brom are conceding more goals (3.14 per game) than any other Premier League team under any other manager in the near-30-year history of the competition. Which makes Richard Keys’ suggestion that Guardiola employ Allardyce to sort out his defence even more ludicrous than it seemed at the time. The Allardyce magic appears to have succumbed to coronavirus.

‘There is enough about this West Brom side to get out of trouble,’ we wrote in mid-December when we mused that Bilic was a victim of his own near-success, making the Baggies just about good enough for Allardyce to take on a job he was unlikely to be offered elsewhere. We could not have predicted that less than six weeks later, he would be clinging onto hope rather than expectation.