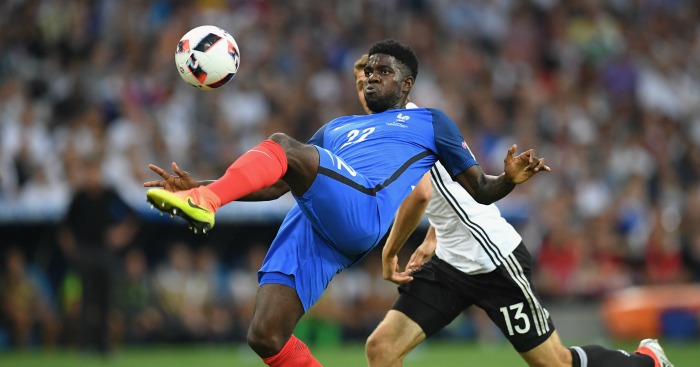 “Winners find a way to win, and Germany are winners,” BBC commentator Steve Wilson declared at the start of the second half in Marseille. Unfortunately, winners also find a way to blunt the opposition. Winners show resolve when their backs are against the wall. Winners score when given their opportunities. France, the hosts, look like winners again. For 1984 and 1998, read 2016.

For long periods of the first half, Didier Deschamps’ team were outplayed by Joachim Loew’s, Germany dominating possession in distinctly ominous fashion. Deschamps’ decision to stick with the team that beat Iceland looked like tactical suicide as Mesut Ozil flourished in the N’Golo Kante-shaped hole in midfield. Getting Antoine Griezmann in the centre may have been the aim, but it’s a futile move if you can’t get him the ball.

Yet France found a way, urged on by a support that has finally found its voice. Gone were the groans of Lyon and Lille, back were the oles of Saint-Denis. Just like in World Cup ’98, a public is falling in love with its football team.

To state that goals change games is to guarantee a nomination for the Bleeding Obvious award, but never has it been more pronounced. The reaction to the award of a penalty in the stadium might have been one of amazement, but the ire should be directed not at referee Nicola Rizzoli but Bastian Schweinsteiger. If you go into a challenge with your hand first, you can’t suddenly act shocked when the ball strikes it and a penalty is awarded.

Griezmann is having the kind of tournament of which every player dreams. Paul Pogba and Dimitri Payet may take the headlines, but it is Griezmann who deserves the Player of the Tournament award. He becomes only the second player in the tournament’s history to score more than five goals – for 1984 Michel Platini, read 2016 Griezmann. Atletico Madrid’s decision to tie him down to a new contract pre-tournament looks like the signing of the summer.

I wrote after the victory over Slovakia that Mario Gomez could be the key to German victory in this tournament, and so it proved. The striker’s injury absence forced Loew to play Thomas Muller as a nominal centre forward, and the Bayern Munich attacker performed exactly as he has in every other game at this tournament. Harry Kane and David Alaba are Muller’s only rivals for the biggest individual disappointment of Euro 2016. For all the brilliance of Ozil and Toni Kroos, and there was plenty, a team relies on its finisher. There’s no point having master craftsmen if the guy packing the boxes has butterfingers.

It is easy to focus on the excellence of Griezmann, but there were those in blue even more deserving of praise. During a tournament when Joe Hart was shambolic and on a night during which Manuel Neuer was at fault for France’s second goal, Hugo Lloris has been exemplary. His injury-time save may lay claim to be the finest of the competition.

Moussa Sissoko also merits standing applause, particularly given the tactical responsibility placed upon him. Sarah Winterburn’s article on the gap between Sissoko’s club disillusionment and international recognition could not have been better timed; no shots, no chances created, a team-high number of tackles made.

Yet the star of the show lay not in midfield, but defence. Samuel Umtiti had already agreed his move to Barcelona before making his international debut, but on Thursday’s evidence a fee of £20.6m is a steal. This has been an incredible four weeks for the least-experienced outfielder in Deschamps’ squad.

Umtiti was not even included in France’s original 23-man squad, but was deservedly called up after an injury to Jérémy Mathieu. Deschamps should make appropriate sacrifices to the gods of calf strains for Umtiti, who only made his debut against Iceland in the quarter-final, has been a revelation. For all their possession and territory, Germany managed no shots on target between the 25th and 93rd minute.

In the build-up to the game, Rio Ferdinand pointed out that Umtiti had been at fault for both of Iceland’s second-half goals; this was his response. Not only was he defensively solid (making nine clearances), but his passing out of defence was assured. Twice he dummied playing the ball long before dipping and dribbling in the opposite direction.

In the space of five days, Umtiti has played in two biggest matches of his life. He has misplaced two passes in total over those matches. To show such confidence under such pressure bodes well for his immediate future, while Deschamps deserves credit for sticking with his prodigy.

That future will begin on Sunday, when France face Portugal in Paris and Umtiti will surely be targeted by Cristiano Ronaldo. What better way to prepare for life in Spain than by attempting to quell his toughest likely opponent? Play as well as in the semi-final, and France will surely lift their third major trophy in 20 years. No country has managed more.