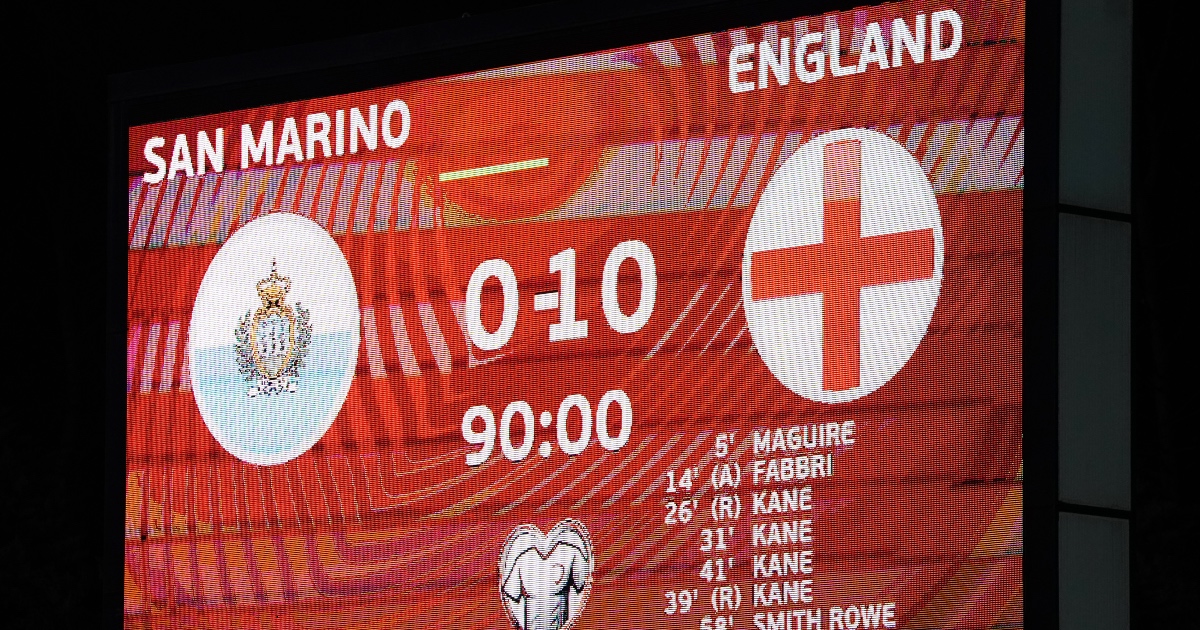 Was that fun, boring or cruel? Yes. Anyway, England are off to the World Cup…

AARON RAMSDALE
He had to make a save, which was fun. He possibly made it look a bit harder than it was actually, but he saved it, and then punched the resulting corner well clear of danger. Must have missed his other ten touches.

HARRY MAGUIRE
San Marino appeared as small in stature as population as Maguire loomed seemingly above the entire team from a standing position to nod in the opener. Sam Matterface said his celebration was “a bit more diplomatic”, presumably performed with a view to not upsetting ambassador Roy Keane in the studio, who was cruelly denied another opportunity to create a headline. Decent switches of play; looked comfortable and solid.

Harry Maguire (7) is now the top-scoring centre-back in England’s history, ahead of John Terry and Jack Charlton (6).

CONOR COADY
He was captain by the end, but we can’t remember anything he did. Completed all of his passes, apparently.

TYRONE MINGS
Possibly a bit fortunate not to give away a penalty in the first half and nearly embarrassed in the second as a straight ball forward deceived him. Excellent neck craning to score his header.

TRENT ALEXANDER-ARNOLD
It’s not the sort of game that was ever going to give him the chance of playing his way into the team, but even if it was that sort of game, he didn’t do enough. He’s ordinarily not given the freedom to play for England as he does for Liverpool, but he had that freedom in San Marino and did very little with it, dribbling into people, crossing to no-one and just generally not doing an awful lot. Reece James will have enjoyed Alexander-Arnold’s display more than Alexander-Arnold.

Guys, calm down. That’s what we had before he produced three excellent assists for the eighth, ninth and tenth goals for England. Don’t get it twisted, it still won’t have been enough to play himself into the team, but for a man who’s been devoid of confidence in an England shirt, this was a game bigger and more important for him than anyone. It could also be big for England.

KALVIN PHILLIPS
Kept things ticking nicely, completing 34 of his 35 passes as well as making two tackles. Not all that much of the Pirlo-ness required from the Yorkshireman, who was taken off at half-time.

JUDE BELLINGHAM
Slightly disappointing? It’s not the sort of game that he was ever likely to shine in, really – better in situations where there’s space to beat midfield players and counter. He was clearly very keen to score his first international goal, shouting at his teammates and pointing to his feet in the box at the horror of them not passing to him, and was cruelly denied by a very odd VAR call.

BUKAYO SAKA
An absolute livewire all evening and probably the best of the bunch. Was denied an early goal as his shot had taken at least two, possibly three, deflections, but got on the scoresheet to secure double figures. All of England’s play came down the left with Saka in the first half, then moved to the right with Saka in the second. That’s no coincidence.

PHIL FODEN
He will never have a better opportunity to score a scissor-kick, but instead spanked it at a waving Dante Rossi, who couldn’t pull his hand away quickly enough. The gulf in quality was never as stark as when Foden was on the ball.

EMILE SMITH ROWE
Clever cross behind the defenders to assist Harry Kane’s second and was predictably effective in tandem with Saka on the left. He really does have a lovely first touch and it’s a delight to see him running with the ball, and indeed on to it. Among the many, many options Gareth Southgate has in those No.10 roles, he’s the best at ‘arriving in the box’, a la Frank Lampard, and calmly slotted in his first international goal.

HARRY KANE
16 international goals in a calendar year is silly. Sure, we will take those goals for granted until he’s retired – it’s what we do – but we really should marvel at the guy. The second penalty was perfect and he showed great feet in the box for the fourth. The way he’s going at the moment, he’s going to have more goals than a… goal store. HAHAHA.

Matterface: “The way he’s going he’s going to have more records than HMV”

That line has been written in his notes for days. Probably highlighted too. He’s been itching from kickoff to get it out.

CONOR GALLAGHER
Should have scored at least two having given the goalkeeper catching practice with a volley before hitting the post. But he transferred his Crystal Palace ‘everywhere-ness’ to the international stage.

TAMMY ABRAHAM
Fluffed a good chance – dinking the ball over the keeper and the bar. But he showed two wonderful touches: the first to delicately set up Smith Rowe; the second to control the ball on his knee before swivelling and passing the ball into the corner.

BEN CHILWELL
Continued to raid down the left as Saka did and picked out passes having got into good positions. Not that this was the game to illustrate it, but he’s back to somewhere near his best for club and country.

REECE JAMES
Replaced Kane and sat in midfield for a bit. Did nothing wrong.