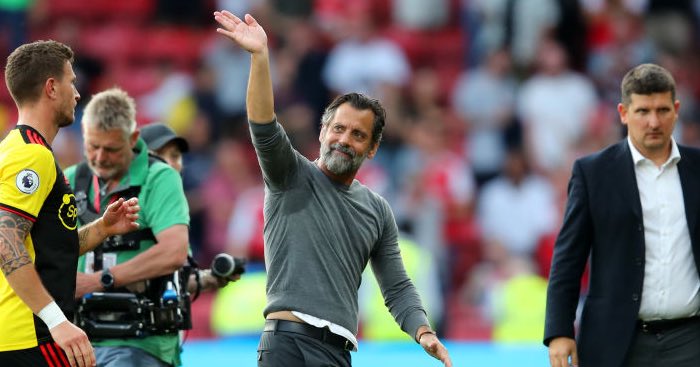 Watford head coach Quique Sanchez Flores believes getting his players to rediscover their confidence is key to turning things around.

The Hornets are bottom of the table by two points having failed to register a Premier League win since April.

Flores replaced Javi Gracia in early September but Watford have since picked up only four points from six matches and morale is understandably low.

The Spaniard said he cannot buy confidence from a store but is hopeful the players will find a way to boost their morale.

“I can see the players they are compromised. Of course, if we were able to win it will be a little bit different,” he told a press conference ahead of the visit of Chelsea.

“At the moment we are in this situation. It is bad, it is hard, and the fans are suffering.

“The confidence of the players is the most important thing as they need to solve the results.

“You can’t go to a store and say, ‘I want confidence’ that is impossible.

“The feeling is mostly really good, even though we didn’t win the last matches. We tried hard and tried to reduce the attempts of the opponent.

“We just need to be a bit more relaxed in the last third. Try to be not so nervous and when you play with a confidence you can take good decisions.”

Flores made eight changes for the midweek Carabao Cup defeat at Everton but was satisfied with how the fringe players performed in the 2-0 loss.

“The players who had not played as much, they showed us they are training well and understand the same rules as the rest of the team,” he added.

“They didn’t look for excuses, they worked hard.

“It is a very hard time for us as we try to find this first win but the squad is working very hard and I think we feel much better defending together.

“But we are not able to win and even when we draw it is not enough.”